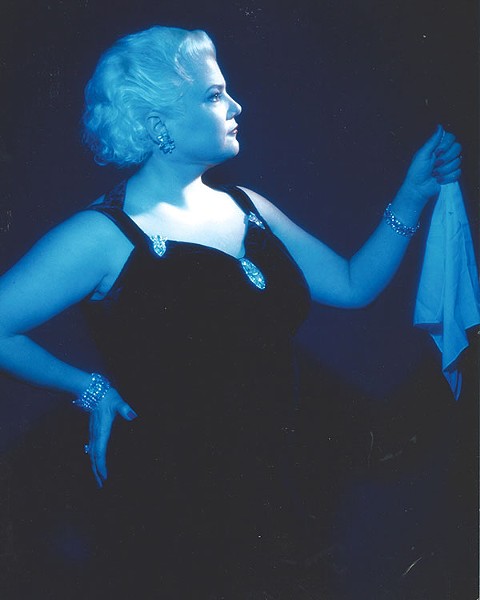 'It started as a dream—literally," says Sharon McNight, describing how her affection for the music of late vaudeville legend Sophie Tucker became the one-woman-show Red Hot Mama.

A Tony-award nominee for her lead performance in the 1989 fantasy-musical Starmites, McNight will be bringing her acclaimed solo show to the Cinnabar Theater for a three-weekend run beginning Jan. 6. The run will mark McNight's first appearance in Sonoma County.

It began with that dream—but it wasn't McNight's dream. "It was the guy who signed me to my first record contract," she recalls. "He said that he saw me playing Sophie Tucker on a Broadway stage. This was 1981, and I was in performing in Provincetown, Mass., at the time.

"The guy woke up, called my manager, and he said, 'I had this dream about Sharon and Sophie Tucker, and I think it's a really good idea. Tell Sharon to get Sophie Tucker's biography and start putting together a show. It's important that this happen. I think it could be really big for her.'"

It was, it turns out, a dream come true, though it took a few years for the Sophie Tucker project to get rolling. Eventually, Red Hot Mama hit the stage, and has since become a source of constant discovery and opportunity for the Modesto-born McNight. She's won critical acclaim for the show, and for several others she's written and performed over the years.

"She was really something," McNight says of Tucker, whom the Los Angeles Times once called "one of the great wonders of the musical stage."

"At a time when women were not all that independent," McNight says, Tucker "was totally in control of her own life. She decided early on that her best hope of earning money to take care of her kid was to hit the road, so she did.

"She carried her own suitcases, negotiated her own contracts, chose her own path. She was amazing, though her life was never easy, largely because of those choices."

In the show, McNight sings dozens of Tucker's songs, from lesser known gems to some of the tunes she's most associated with, including "Red Hot Mama," "Some of These Days," "My Yiddishe Mama" and "I Don't Want to Get Thin."

"It's those songs that I first fell in love with," says McNight. "Sophie could beautifully sell a song. She really knew how to tell a story."

And so, clearly, does Sharon McNight.