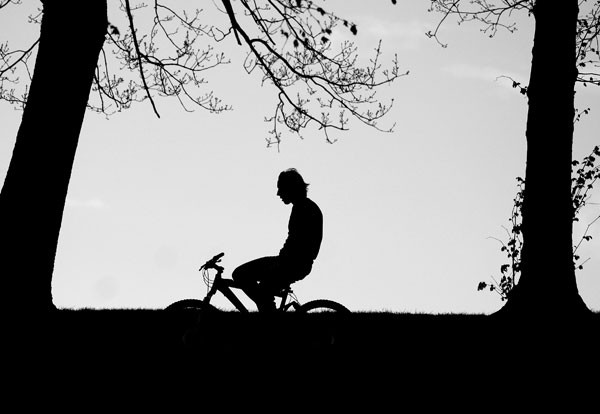 Rushing down the road each morning while driving the kids to school, it was hard to miss the Santa Claus–like bicyclist with the red parka and white beard, steadily heading uphill. If he was halfway up Bloomfield Road, we were on time, but if he was near Burnside Road, we were running behind. And if he was at our mailbox, we were really late.

Somewhere in the 16 years of seeing our morning timekeeper, we got to know the cyclist as Warren Arnold, sculptor of the marble whales at Doran Beach and creator of Sebastopol's Sculpture Jam. After 25 years, Arnold continues to faithfully ride the 15-mile, round-trip route from his studio on Lone Pine Road to the crest of English Hill on his silver 21-speed Giant. Although he still resembles Santa, his svelte build distinguishes him from the elf, and belies his age: 78 years old.

A recent morning's trip is number 5,850, and as Arnold pedals to the top, he revels in the beauty of the area. "I'm so slow I can actually count the wildflowers as I go," he says. "Yesterday, I saw 55 different kinds. With the rain and heat, things are exploding. We live in paradise. It's great for sightseeing."

Arnold started to ride regularly as rehab for a knee injury, adding a special "granny" gear to his bike. "It makes the hills so easy that even granny can ride them," he laughs. "Biking is a non-weight-bearing aerobic exercise, but you're still moving everything." It took Arnold a month to reach the top of the hill without stopping, and when he accomplished that a hundred times, he thought he would quit. "I got to know the folks who live at the top and asked if I could have a party on their property," Arnold says. "I had the party, and my knee is rehabbed, but I haven't stopped riding. Over the course of time, I've gotten to know a lot of people along the route and have watched their kids grow up."

In cold weather Arnold carries three pairs of gloves, preheated in his shirt, swapping them out when his hands chill. But cold weather has been the least of his worries. "I've been on the top of Burnside in snow," he says. "I've seen ice falling from the trees. I've been there with PG&E, watching power lines blowing in wind so strong it holds you up when you lean into it. I hit black ice once, landed on my head and cracked my helmet open, but I was OK. And I have to be cautious about the cars whizzing past on their way to school. But I'll still keep riding, so in a year and a half, I'll hit my next target—6,000 rides!"