'Economics of Peace' conference looks for a new model 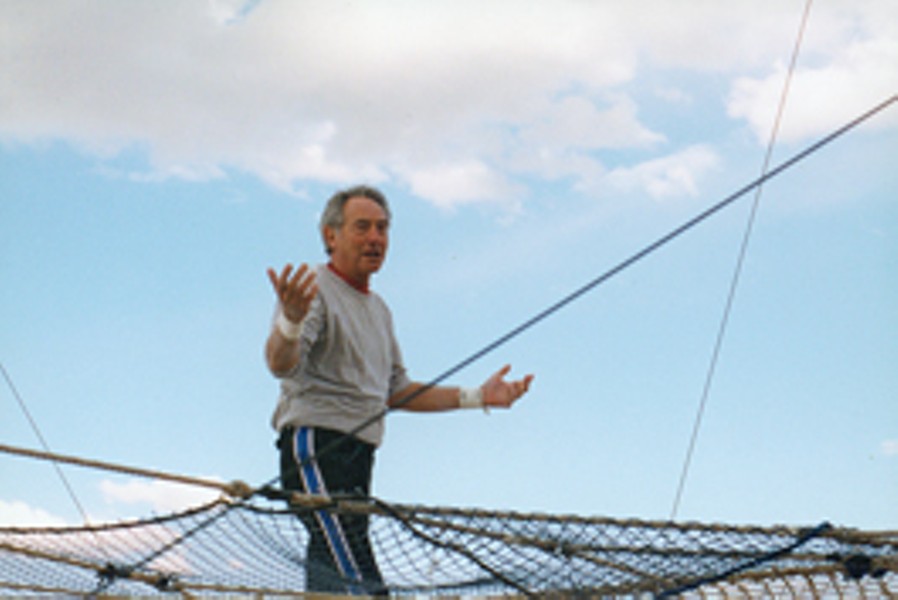 We're stuck, wading through the muck of a society where cash is king, the odds favor the big winners and where even the election of a president who pledged to be progressive shows little promise of proactive change. Few in the country can envision a brighter future because we don't have a rigorous framework for imagining one, say several speakers at next week's Economics of Peace conference in Sonoma.

We need a new American myth, and the Oct. 18&–23 Economics of Peace conference hosted by the Praxis Peace Institute hopes to foster just that. The conference aims to create an interactive environment—it won't be solely speakers preaching from on high—where attendees can share ideas with leading progressive thinkers. Among the topics: social finance, slow money, green jobs, living wages, microcredit and bolstering local economies.

The best way to do that, says Keen, is to replace Adam Smith's economic myth that emerged from the industrial revolution with a 21st-century idea that elevates people and the environment above profit-making.

"We're at the end of the myth of Homo economicus," Keen says. "We have a myth of warfare, and economics follows the myth, money follows desire. If you think wealth equals worth and military equals strength, then the money follows those desires.

"We need to shift away from gross national product to gross universal well-being."

This is not a pie-in-the-sky idea, say Keen and other conference speakers who cite alternative currency systems and worker-owned businesses here in the North Bay as models for economic evolution.

It all starts with new ways of thinking, and the conference's goal is to provide a compass for navigating the long road toward a more just economy.

"We need to deconstruct our cultural myths about money and economics," says conference organizer Georgia Kelly. "Until we understand how we're captive within cultural myths, we won't know how to make changes."

Keen and Kelly agree that sometimes the best way to envision a new paradigm is to ask questions. The key question, Kelly says, is "what type of economic relationships support social justice, environmental sustainability and peace?"

Last year Kelly led a group to visit the Mondragón Cooperative Corporation (MCC) centered in Spain's Basque region, whose businesses employ more than 100,000 people. On the trip, she found a system where workers' needs are paramount. And here's the revelatory part: making workers a top priority over shareholders led the businesses to thrive in good times and survive the downturns.

Kelly learned about a business that may have shut down had it not been part of the MCC. After three days of meetings, the employee-owners agreed that 20 percent of the workforce would leave their jobs for a year, and receive a substantial percentage of their regular pay.

She says the solution worked because the worker/co-owners are conscious of protecting themselves while keeping an eye on the bottom line. "However, at Mondragón," she says, "they always put people before profit."

Amazingly, there's no unemployment within the Mondragón cooperative. Zero, nada, zilch. People sometimes have to shift jobs or cut hours, but there are no Friday-afternoon pink slips and security escorts out the side door.

Founded in 1956 by Father Don Jose Arizmendi, a Basque Catholic priest, the Mondragón cooperatives today comprise more than a hundred worker-owned businesses, as well as more than a hundred subsidiaries that MCC has purchased and hopes to convert. In 2007, MCC, now the largest corporation in the Basque region and seventh largest in Spain, according to Wikipedia, generated revenues of more than $24 billion.

We have the seedlings of new business models here in the Bay Area as well, Kelly says, citing such worker-owned businesses as Alvarado Street Bakery, a cooperative in Petaluma, and Arizmendi Bakery in San Francisco, named for MCC's founder. "Employees are paid living wages," Kelly says. "It's very successful."

That's not the case for millions of manufacturing and service workers in the United States today, says West Marin activist Norman Solomon, author of War Made Easy and Made Love, Got War.

"There are so many forces trying to block the living wage, and these forces are allied against meeting human needs, because lavish military spending has taken on a life of its own," he says.

"It's clear that our priority is warfare not healthcare," says Solomon, who visited Afghanistan during the summer. "It feels far away but it's also nearby. Sonoma County taxpayers have already sent $1.6 billion overseas—that's billion with a b—to pay for the wars in Iraq and Afghanistan.

"Think what you could do with that money!" he says. "Palm Drive Hospital [a private hospital in Sebastopol] needed just $3 million to stave off bankruptcy. The state of California has sent $100 billion in this decade for the wars in Afghanistan and Iraq. If we could get a refund, then the big problem of the state legislature would be what to do with a humongous surplus."

OK, so the environment is on the verge of collapse, the economy is in free fall and human survival, at least the life we're accustomed to with abundant food, secure shelter, plasma TVs and videos on demand, is on the precipice.

So why the hell aren't people getting up right now, going to their windows, sticking their heads out and yelling, "I'm mad as hell and I'm not going to take this anymore?"

Simple, says Solomon. We're numb. "We need to overcome the numbing process—the conference can help us move beyond numbing, can be a catalyst," he says. "We cannot be on boom-bust election cycles. We need a long-term social movement. At the conference, we'll move beyond isolation and away from the computer screen."

Solomon quotes Uruguayan writer Eduardo Galeano: "There's an assumption that tomorrow is another word for today." Translation: the future can be better if only we dare to dream it.

Of course, sheer imagination, no matter how bold, is just the first step. So the conference will consider new economic models, such as complementary currencies, in which goods and services are bought and sold without dollars or Euros or yen.

In essence, complementary currencies such as the Toronto Dollar don't supplant the dominant monetary economy; they provide an alternative way of exchanging goods and keep the "money" in the local community.

Here's a hypothetical example of how it works: Say you're a massage therapist in Sonoma County. You could charge 100 credits, call them Sonoma Dollars, for a massage. Then you could spend those credits with other members of the network. For example, you could use SD5 (five Sonoma Dollars) to buy a dozen eggs at Laguna Farms and SD10 to buy goat cheese at Redwood Hill. Safeway wouldn't accept this currency, but the funds stay in the community and support local merchants.

This is just one way to get past what author David Korten says is a myth of choice between capitalism and communism. "These are alternate models of elite rule—we need a Main Street economy," he says, charging that today's economic system is "designed to increase the concentration of wealth, and is foundational to every dysfunction in society."

Economics professor James Galbraith thinks that before we can move forward, we need to look back at how the United States responded to the banking crisis. "We need a full investigation of the complex forces behind the crisis," he says. Though banks have been stabilized, he asserts that they haven't been fixed, as regulation has been lax.

The government has been more concerned with "reassuring the public that banks are not in trouble" than in taking the measures required to get banks back on solid financial ground, Galbraith says.

Like many progressives, Korten is discouraged but not surprised by President Obama's coddling of Wall Street and the banking industry. "It's a testament to Wall Street's control of the political system," he says. "We've got a hell of a lot of work to do. We can't get there with marginal reforms—you don't treat a cancer with a Band-Aid.

"What's happening with climate change, single-payer healthcare and so much else is a result of Wall Street owning the political system," Korten says. "We've got to roll up our shirtsleeves, be clear about how big the job is and get to work."

In a talk he gave last weekend in Portland, Korten said, "Our existing economic system does very well what it was designed by Wall Street interests to do: generate enormous fees and bonuses for Wall Street money managers. It must be replaced by a new economy designed to serve the needs of people, community and earth's living systems."So where to begin?

"We start," Korten says, "with a recognition that the old economy is based on a false premise, the premise that we live in a world of open frontiers with endless, abundant resources free for the taking. We are only now awakening to the reality that we humans are passengers on a living spaceship on which everything must be continuously reused and recycled, and nothing can be thrown away."

"The local living market economies we must now create bear substantial resemblance to the Main Street economies many of us knew as we were growing up in the 1950s, '60s and '70s," Korten says. This is in marked contrast to today's shopping system, in which much of the money spent, at places like Wal-Mart, leaves the local economy.

Praxis' Georgia Kelly notes that Wal-Mart has recently touted its "green practices," but she says a few environmental measures aren't enough. "This ignores the larger question of sustainability and lets them off the hook. Sustainability is bigger than green business because it includes social justice and a living wage."

"The question," Sam Keen says, "is do we have the will to survive? Nobody said this experiment with two-legged beings was destined to succeed. The best we can do is to take a run at it."