Sex in the Shire

Debauchery a lost art at the Renaissance Pleasure Faire

SEX, as anyone who's attended the Renaissance Pleasure Faire over the years has no doubt concluded, was quite a happening thing during the reign of Good Queen Elizabeth. It was a time of optimism, when a freedom-loving populace was securely in touch with their libidos. The "wine, women, and song" of post-medieval England were every bit the match, evidently, of America's post-1950s embrace for "sex, drugs, and rock 'n' roll!"

The legendary faire--an annual re-creation of 16th- century small-town life--is now in its 32nd and (purportedly) final year at Blackpoint Forest in Novato, and if the event has even an ounce of historical accuracy, it goes a long way toward explaining why those lusty Elizabethans were so all-fired lusty. From the colorful garb (low-cut, bosom-enhancing dresses for the women and flamboyant, strap-on penis packages known as cod-pieces for the men) to the bawdy songs of the peasants, a walk down the streets of the Renaissance Pleasure Faire is a stroll through a world of randy exhibitionists and horny Dionysian sensualists.

Or so it was, once upon a time. The faire isn't quite like that anymore, is it? These days, it seems that the great god Dionysus has been tamed by the unsmiling lords of common sense, commerciality, and fear of litigation. The very bawdiness that gave the faire its reputation as the hottest party in town has been cropped back, censored, and tamed. Even a casual survey of faire workers--who prefer to remain anonymous-- elicits a glum confirmation of the new Puritanism,

"No more sex. No more drugs," whispers one veteran peasant. "This is now Disneyland."

In 1979, I first entered the magical mystery of the Renaissance Pleasure Faire--working as a hawker-- when it was in Southern California. I followed the faire north in 1981 to encounter a slightly mellower (not as many drunken brawls) but distinctly sexier environment. For the next 10 years I worked at the faire every summer, managing various attractions.

Remember the Merry Mire, where patrons could purchase buckets of mud to sling at foul-mouthed wenches and uncouth louts perched over a pond of muddy water? That was mine, a popular hot spot until rising insurance costs shut us down.

Many are the tales I could tell: There was the polite young woman who showed up, her therapist by her side, while I was taking my turn on the seat. She purchased a bucket of mud and called out to me, "Nothing personal, but I was abused as a child. So for the next five minutes, you're my father." She left a big tip. After that day I always remembered to wear an athletic cup. Then there was the time one of our hard-working "Mud Puppies" was injured during his shift, while the young lady who was on call to take the seat in such emergencies was amorously entwined in the private living quarters of the game booth next door. Hearing our shouts of "Mud Puppy down!" she discreetly disengaged herself, dressed quickly, and was ready to help within 90 seconds; successfully dodging the mud for the remainder of her shift, she soon returned to her patient partner.

Not that the faire isn't fun anymore. It is.

But it's hard not to become wistful while wandering down the dusty mile from the front gate to the "end of the world." Gone are the rude double-entendres of the street hawkers, who, according to numerous faire workers, must now submit scripts in advance. All hawking must be "appropriate." That's a far cry from the days when rascally rogues and wenches at the ball-toss game booths would shout, "Show us how you handle your balls!"

Also verboten are the "peasant fairy rings," in which playful actors, holding hands, surround two wide-eyed customers and recite a rhyme explaining that the couple will be released from the circle only after exchanging a kiss. Threats of sexual harassment suits have put an end to the practice. Gone also are the near-mythic "Drench-a-Wench" and "Soak-a-Bloke" games, in which customers shot a wet sponge at an array of buff and/or busty actors, receiving in return an eye-popping kiss from the target. That vanished in the '80s, another casualty of AIDS phobia and a growing cultural intolerance toward lighthearted sexual expression. 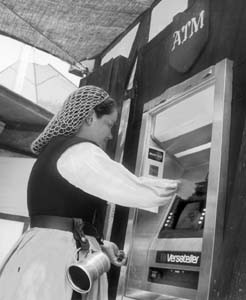 More alarming than what is missing, however, is what has replaced it. If the early faires were an embodiment of the free-loving '60s, the new faire is a perfect reflection of the hyper-commercialized '90s. Customers are now met by banners proclaiming the joys of Miller Beer. ATMs are never far away, and even the street musicians are peddling their tapes and CDs.

"I take Visa, Mastercard, and Discover," pleads one bold harpist to a small crowd of listeners.

The hay bales that were once omnipresent throughout the faire--offering a place to park oneself and watch the spectacle--have been drastically reduced in number.

I am admittedly nostalgic for the days when the faire was a sensual playground, where the smells of food and ale mingled with the heart-stopping promise of an amorous encounter. But everything changes. And not all change is bad.

"There's new management now," agrees one 20-year veteran street actor. "The employees get paid on time and the checks don't bounce. We can't complain about that."

The faire itself, at least in its current incarnation amid the ancient oaks at Black Point Forest, will soon be buried under concrete and turf, after the long-threatened housing development and golf course construction finally begins this August. The faire will move elsewhere, taking its ATMs and corporate sponsors with it.

WALKING the streets on opening day, I take mental note of the memories attached to various sites: Over there is the tree from which a large, bearded fellow used to sell rainbow-colored shirts, offering to share a joint with anyone who stopped to chat. I stop near the corporate-sponsored Red Barrel Stage, where, rumor has it, a water truck once almost ran over a couple of lovers copulating in their sleeping bag in the middle of the road on Saturday night (the bag slid down from a nearby hill, but they were too involved to notice). The spot is now the sight of a booth offering "Final Farewell Medallions--to remember the Faire by."

But with so many memories, who needs a medallion?

I like to think that, years from now, various workers and satisfied patrons from throughout the faire's history will make the pilgrimage to what could by then be the ninth hole at the Renaissance Greens Golf Course. These pilgrims might bring their children along, saying, "There. Right there was the tree under which you were conceived. Right here was the place where people used to kiss strangers in public, without fear. It was called the Renaissance Pleasure Faire. It's moved on, but for a while, it was a wonderful, lusty, unpredictable, and one-of-a-kind place.

"It sure was great while it lasted."