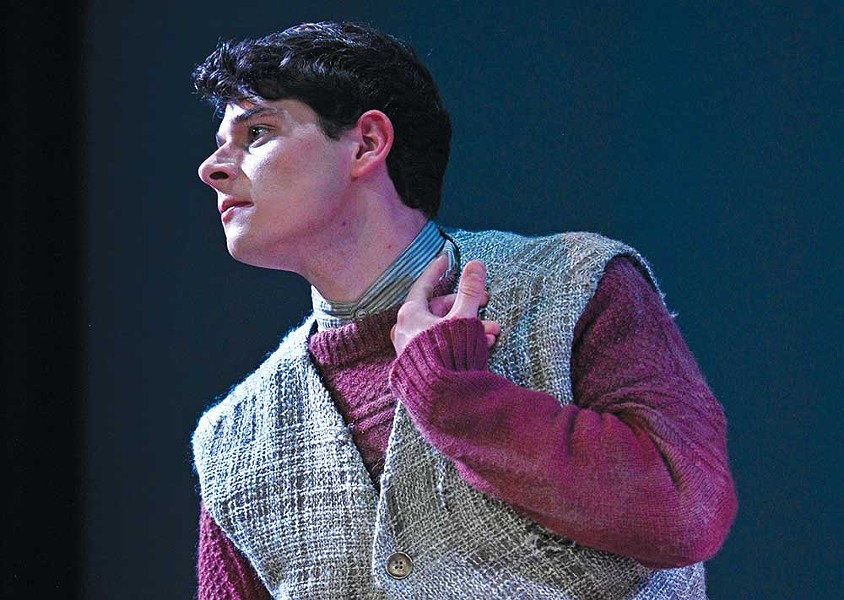 The venerable 600-seat theater has been reconfigured into two performance venues; a 400-seat proscenium-arch space and a 200-seat, three-quarters thrust studio theater. The JC's Theatre Arts Department, which has had to take their shows "on the road" for the past two years, returns to campus to open the Studio Theatre with Martin McDonagh's The Cripple of Inishmaan.

McDonagh, often referred to as "the bad boy of Irish theater," is known for his darkly humorous looks at Irish life both onstage (Beauty Queen of Leenane) and in film (the cult-classic In Bruges).

It's 1934 and the citizens of Inishmaan, one of Ireland's Aran Islands, are all abuzz with the news brought by island crier/gossip/blowhard Johnnypateenmike (Riley Craig). It seems that a Hollywood film crew has arrived to shoot a documentary on a nearby island (This is based on a true incident). The isle's younger folk, like the egg-centric Helen (Hayley Hollis) and candy-obsessed Bartley (Samuel Gleason), have dreams of being discovered. Orphaned Billy Claven (Daniel Dow), known to all on the island as "Cripple Billy," sees it as his chance to escape a life full of unhappiness and derision, perpetrated even by the loving "aunties" (Allyson Bray, Samantha Bohlke-Stater) who raised him.

More tragedy than comedy, there's an undercurrent of sadness and cruelty to the story that matches the bleakness of the play's setting. Each time the show seems to be veering into redemptive sentimentality, McDonagh executes a quick U-turn.

Director Leslie McCauley has a talented ensemble at work here, with the expected challenges of casting college-age students in mature roles minimized by good costume, hair and makeup design by Ariel Allen. Standouts include Dow, who does particularly good physical work, and Craig, who impresses with what is a generally loathsome and pathetic character. Dialect work is also strong courtesy Dialect Coach/Cultural Advisor Jane Martin.

Peter Crompton's scenic design and Theo Bridant's light-and-sound design work in tandem to transform the intimate theater and transport the audience to a wee bit o' Ireland, as does the live musical accompaniment by Lisa Doyle and Sonia Tubridy.

At two-and-a-half hours (with intermission), the show seems to meander a bit—but that, and its deliberate pacing, are no doubt representative of life on a remote Northern Atlantic rock.