Rounding up some local takes on the popular red blend 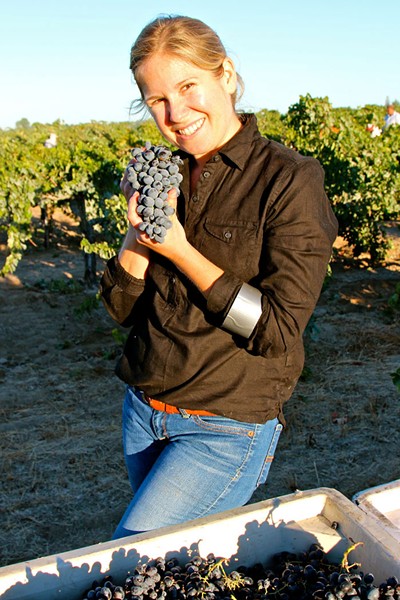 There's still plenty of loose talk in California about "Burgundian-style" wine, but it's the rare wine that's billed as such right on the bottle. I found one that is, but it's a Rhone-style blend—pithy comment on the state of Rhone varietals and blends in advance of the Rhone Rangers 17th annual tasting event.

When I reached for two samples of nationally distributed, nicely priced blends of Grenache, Syrah and Mourvèdre recently, I found that neither said a word about these grapes on its label, front or back. Worse, it's just as well, since neither is likely to inspire one to saddle up with the Rhone Rangers.

The good news is that, with a little more effort and not too much more money, plenty of exciting wines in this category can now be found. Unlike California's popular "kitchen sink" blends of Cab, Zin, Syrah and other grapes, Rhone blends usually—but are not required to—conform to a formula traditional to France's Côtes du Rhône region. But the grapevines themselves are nothing new to California, as Napa winemaker Jillian Johnson (pictured) found while working for Bonny Doon. They used wine from a singular survivor in Lodi, a 137-year-old vineyard planted entirely to Cinsault, to punch up Le Cigare Volant and other blends. Now Johnson contracts four acres for her own label. The Onesta 2011 Lodi Cinsault ($29) is peppery, warmly imbued with plum and licorice, and is a real pleasure to drink.

I expected Cline's 2012 Cashmere ($21) to also be a pleasure to drink. From some of Cline's heritage Contra Costa County vineyards, it's light-bodied and soft, but smells older than its years and tastes a bit "rescued." On the plus side, proceeds help support Living Beyond Breast Cancer.

Francis Ford Coppola's 2012 Chateau Red ($14) is a new addition to the winery's Votre Santé line. More deeply colored and with stickier tannin, this hints at savory notes over black cherry fruit and is easy to drink, but seems to have been bullied into the bottle too early.

So how do they do it back in "home, sweet Rhone?" Famille Perrin's 2010 Les Sinards Châteauneuf-du-Pape ($35) comes from the folks behind Château de Beaucastel, partners also in Tablas Creek of Paso Robles. Dried fruits are drowned out by waves of Bergamot orange, leather, fermenting hay and assorted volatile aromas that sing from the glass. Medium-bodied, astringent, tensely herbal and cherry-fruited all at once, it's heaps wilder than the California blends, but I just keep coming back to it. Perhaps some of our Rangers will pick up the trail here.