Put aside your notions of sweet wine

See this week's 'Swirl' column, p16, for notes on a 'Bohemian' tasting of several Rieslings. 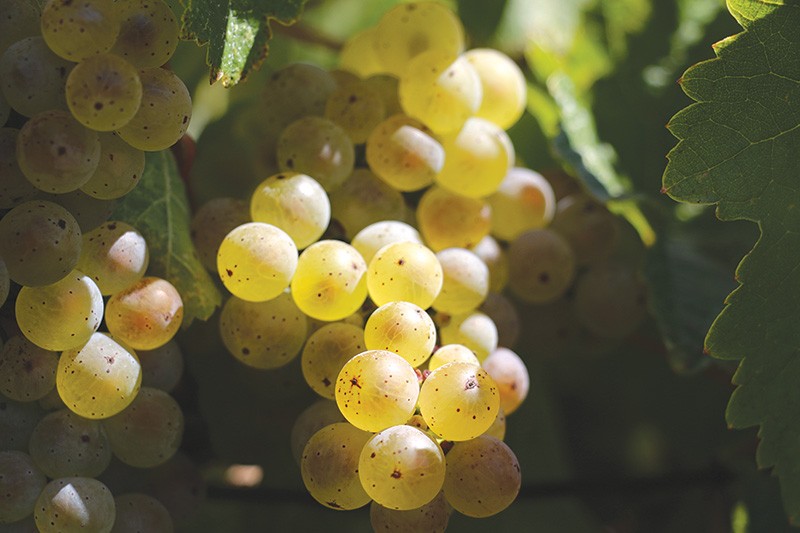 Riesling is the last varietal you expect to find heading up a meat fest in Cabernet country. Even more surprising is that much of the Riesling poured at Cochon 555's Heritage Fire in Napa earlier this month was dry as a bone.

In the carriage house at Charles Krug Winery, VIP ticket holders at the Aug. 2 event sampled shimmering pours of Riesling in a seminar sponsored by Wines of Germany. Outside, a menagerie of skinned animals roasted over hot coals. Plenty of Cabernet Sauvignon was on offer at the wood-fired bacchanal, but also more Riesling.

Still, it was no accident that the varietal's name was left off the title of the seminar, "Exploring German Wines," presenter Ryan Stetins admitted to the crowd. Stetins, a Riesling enthusiast and wine buyer at the Ritz-Carlton in San Francisco, is also a realist—he didn't want to scare away potential attendees with that word.

It's the word I mentioned while talking wine with a Bohemian staffer several months ago. Wrinkling her nose, she responded, "Riesling? Yuck!" It's the word I slipped into a conversation with friends at the ballpark this spring—over cups of overpriced beer, of course. Well-traveled, they enjoy a variety of wines: "Riesling?" They shook their heads. "Oh, I don't like sweet wine."

For Azari Vineyards in Petaluma, it's the wine that dares not speak its name. Azari makes a dry, 100 percent Riesling it calls Luma Blanc instead—a necessary ruse, they say.

The perennial comeback kid of wine, Riesling has been declared dry and rising in countless articles over the past decade (including the Bohemian, June 11, 2008). So why is this association with sweetness so . . . sticky?

Wine writer and historian John Winthrop Haeger is no fan of sweet wine. "When I started teaching winetasting classes in the 1960s," he recalls, "I did Riesling as an obligation." Haeger says that it wasn't a stereotype at the time. It was the truth.

"It was almost 100 percent sweet—not necessarily dessert-sweet—until the end of the 1970s, and you had to look very hard to find dry Riesling." Early dry Rieslings got a bad rap. Now, with better techniques, German winemakers are producing dry Riesling with texture and balance.

"The rest of the world knows at this point that Riesling is a dry variety," Haeger says. "Three-quarters of German production is dry." The conundrum: Americans think of it as sweet because virtually the only people left who are buying Riesling in America want it sweet, and the producers supplying that market are happy to make it so. Our view of Riesling is largely stuck in the 1970s, while continental Europe and Australia have moved on.

Haeger has written a book on dry Riesling, which is significant because he wrote the book on Pinot Noir, just about literally: North American Pinot Noir was released several months before the movie Sideways helped awaken Americans to that varietal's existence. The book was added to many a wine lover's reading list. Haeger's Riesling Rediscovered is scheduled for release in December from University of California Press.

Published in 2014, Stuart Pigott's book Best White Wine on Earth: The Riesling Story is a thrill ride around the world of Riesling. After some history—and a little invective against Riesling's mass-produced rivals, like insipid Pinot Grigio—Pigott's world tour includes stops at some stalwart Napa Valley producers.

"They're good, but they're still a hand sell," says Kelli White, sommelier at St. Helena's Press restaurant, of local Rieslings. She sees more interest among those who work in the industry. "Because if any part of your world involves the pairing of food and wine, Riesling is very versatile and performs well where a lot of other wines would fail."

The rote food-pairing advice on Riesling is—say it together—"spicy Asian food." While that may be true for off-dry styles, Stetins says that vintners he knows in Germany, who make big, dry Grosses Gewächs Riesling, enjoy drinking it with rib-eye.

"Yes, Riesling does hold up to Asian cuisine, which is unique in the wine world, but it's a very narrow scope of what Riesling is capable of," says Hailey Trefethen, of Trefethen Family Vineyards. "For the same reasons that Riesling can hold up to spicy food (acidity/brightness), it can also hold up to fatty foods. So fatty fish is a great pairing. Scallop ceviche with spice—delicious!"

"It's my favorite varietal for wine pairing, because it makes you salivate," says Zazu Kitchen's Duskie Estes. "When I think about Riesling, I think of bacon, corn, pâté, duck, fish, cherries, peaches, ginger, lemongrass, pork, rabbit, and smoked and spicy things."

Perhaps Riesling is having the last laugh on Chardonnay. Statewide, Riesling plantings have increased in past decades, particularly in Monterey County. But curiously, not all of it is being bottled as such.

"A lot of California Riesling is used to enliven Chardonnay," Haeger asserts. "Nobody likes to admit to this, but it's absolutely true."