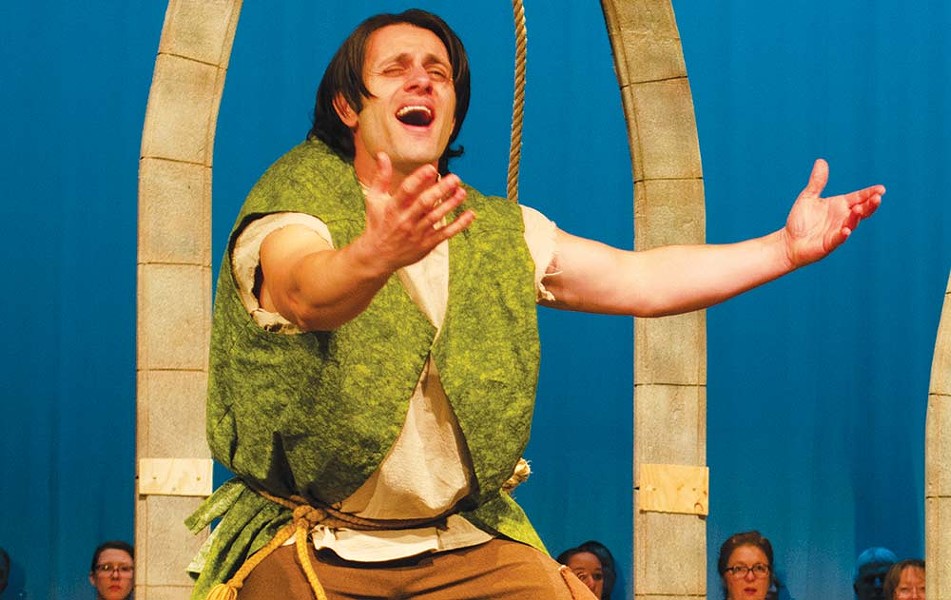 The Hunchback of Notre Dame finally makes its North Bay debut with a production offered up by a local music education center. Cotati's Music to My Ears presents the musical at the new Rancho Cotate High School Theatre Arts Auditorium in Rohnert Park through March 8.

A blend of Victor Hugo's gothic novel and Disney's 1996 animated musical, the show never made it to Broadway but has met with some success in regional and community theaters. Rohnert Park's Spreckels Theatre Company scheduled it in a season a few years back, but pulled the darker-than-you-would-expect-with-the-name-Disney-attached entertainment for a more "family friendly" show.

Hugo's 15th century–era tale of Notre Dame Cathedral's bell-ringer Quasimodo (Chris DeSouza), his guardian Archdeacon Frollo (William O'Neill), and a gypsy girl named Esmeralda (director Aja Gianola-Norris) is a monster of a show to produce. Operatic in scope, the production benefits immensely from the involvement of San Francisco Opera–member O'Neill as both performer and choir director. A chorus is integral to this show, and there's a 28-member chorus on stage throughout.

DeSouza—who is deaf (as is Quasimodo)—communicates beautifully through American Sign Language, while actor/singer Ezra Hernandez provides the character's speaking and singing voice. This had to add a significant level of complexity to the production, and credit must be given to all involved for making it work so well. While many cast members utilize ASL in the show, the March 6 performance will be fully ASL interpreted.

Gianola-Norris makes for an entrancing Esmeralda, and Alanna Weatherby, as narrator Clopin, and Blake Chandler, as the dashing Phoebus, also give convincing performances. Performers of a variety of ages and abilities fill out the ensemble, in fulfillment of the producing company's vision that participation in theater is for everyone.

While Caitlyn Clark's costumery is worthy, the performance I attended lacked in technical finesse. There's no set to speak of, and haphazard lighting and missed sound cues were a constant distraction. To add insult to injury, someone pulled the fire alarm during the final scene and the theater had to be evacuated. After receiving clearance, in the best tradition of "the show must go on," it did.

The nobility shown by the cast and audience in dealing with that situation makes for a good summation of this production. The Hunchback of Notre Dame is a noble effort.