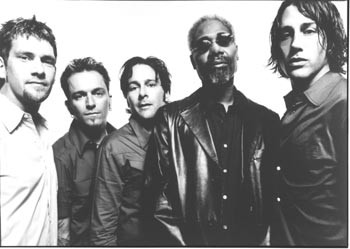 TWO YEARS AGO, the members of Robert Bradley's Blackwater Surprise figured their 1996 self-titled CD was about to join the legion of albums that are released and disappear without making much of an impact. Then came a most unexpected event. The video for the acoustic soul ballad "Once upon a Time" was aired by MTV on its "12 Angry Viewers" show. Though the song was pitted against some high-profile competition on this record review program, the viewers made it their top pick for that day and later their favorite for the week. This prompted MTV to put the video into heavy rotation.

Suddenly Robert Bradley's Blackwater Surprise (RCA) had been given a whole new life.

"It was a big surprise, that '12 Angry Viewers' thing, because you know, hey, RCA was probably about ready to let us go," Bradley says. "Most radio stations, programmers, they didn't know what type of music this was [or what radio format it fit]. What do you do? Well, we don't know what we do either. That's why it's a surprise. That's how we came up with the name Blackwater Surprise. We didn't know.

"So I mean, MTV, that was a shock. We went from selling 50 records a week to 3,000. So that kept us on the line at RCA and enabled us to get to the second record. That was really MTV--I can't thank them enough."

The arrival of Robert Bradley's Blackwater Surprise on MTV is only slightly less remarkable than the circumstances that spawned the band itself. One day in 1990, guitarist Michael Nehra, his brother, bassist Andrew Nehra, and drummer Jeff Fowlkes--three musicians who had recently been in a band signed to EMI Records called Second Self--were in the Nehra brothers' downtown Detroit studio rehearsing. That morning they heard Bradley singing on a street corner outside the studio. Stunned by Bradley's earthy and soulful vocals and the songs he was singing, the three decided to approach Bradley and invite him up to the studio.

Bradley hesitated at the invitation.

The truth is that being a street musician had become a fairly lucrative pursuit for Bradley, an Alabama native who had been legally blind since birth.

It wasn't as though this had been Bradley's original lifestyle. In fact, he had gotten married in 1972 and had five children. But by the mid 1970s, the marriage had begun to crumble and Bradley wasn't all that thrilled with his job running a store for the blind for the state of Alabama. He decided to move to Detroit, where he had lived with his family as a teenager. There he was introduced to the idea of busking on the streets for money.

"I met this guy on the corner [playing songs]," Bradley explains. "He said, 'Man, go get you a guitar and get out here and I'll make you some money.' So I went and bought a guitar, learned a few chords, and started doing it."

Soon Bradley was making trips to California and Alabama, playing on the streets whenever he needed to make money along the way and enjoying the life of a gypsy musician. But by the 1980s, he was spending much of his time in Detroit, where he had become a fixture in Detroit's Eastern Market. In fact, Bradley had become so popular that when the city tried to ban street musicians from playing, citizens successfully pressed a petition allowing Bradley to play his Eastern Market gig again.

"It was like it got to the point where I didn't work but once a week and I'd make $500 bucks," Bradley said. "I'd play there for four hours and then go home, and I wouldn't go back to work until I'd spent it all."

Part of what made Bradley a unique attraction was that he played nearly all original material. Blessed with the ability to come up with melodies and lyrics on the spot, he estimates that he created around 1,000 songs during his years of busking.

"I know all of them. They're in my head," he says. "But there are probably about 250 of them that I can just down and go through one to the other."

Andrew and Michael Nehra and Keith Fowlkes finally persuaded Bradley to come to their studio and began recording some of his originals. Slowly, over the course of three years, Bradley and his future bandmates built a personal rapport and a musical chemistry that compelled them to form Robert Bradley's Blackwater Surprise. "We just got together gradually over the four years," Bradley says. "I would go down there maybe on Mondays, Wednesdays, and Fridays and stuff like that. So it went on like that for a while. And so we got to know each other really before we formed the group.

"That's what made us friends first."

But Bradley feels the newly released Time to Discover represents a significant step forward for the group, which has added a keyboard player, Tim Diaz, to the lineup. The group members draw on a similar range of influences--pulling a taste of Sly and the Family Stone&-style rock on "Ride" and a grittier brand of Philly-style soul on "Baby." On the ballad "Take Love and Receive It," the band evokes the music of Curtis Mayfield, but with some hip-hop&-type sonic flourishes. The title song taps folk and rock influences, creating a sound that would be at home on a Hootie & the Blowfish album.

Part of the cohesion is a product of the 400-plus shows the group has played following the release of the first CD. "We had grown as a group together being out touring," Bradley says. "So we became a band."

But for Bradley, 50, one of the biggest differences is that the songs incorporate more of the rock influences of his bandmates--who are all some 15 years younger than he--to create more of a contemporary sound.

"Really what I wanted to do with those guys was put a little more of themselves into it, make it more up-to-date sounding," Bradley says. "We didn't want to take it too far away that we would lose the people we had gained at first, but what I figured is, I told them, 'Look, just try to make it a little bit more radio friendly, like maybe so it could get programmed on radio a bit more.' "

From the August 31-September 6, 2000 issue of the Sonoma County Independent.