What's that creeping up near the Sonoma County airport—a TV horror sitcom? 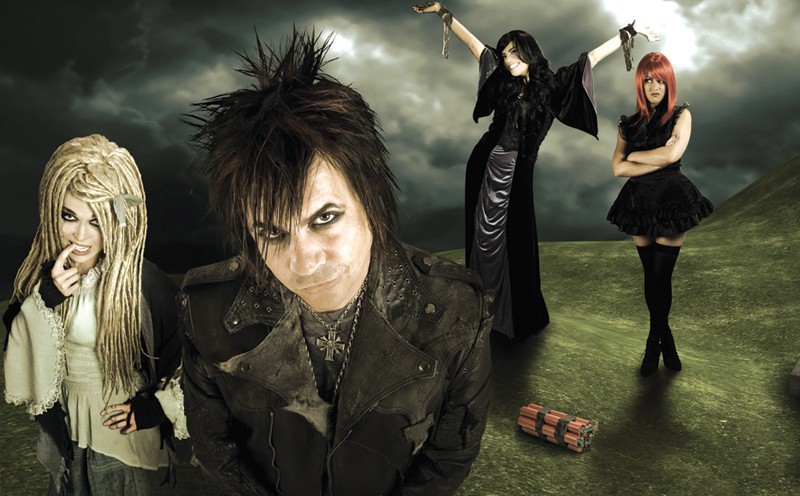 "Now, if you'll step over here," offers writer-director Daniel Sullivan, matter-of-factly, "I'd like to show you our guillotine. We'd be fools not to have one."

At the edge of this spooky-gothic living room set, near a gleaming EZ-Jib camera crane that stands at the center of the room, the guillotine looms with whimsically creepy menace. No self-respecting house of horrors would be worth its weight in rattling chains without its own head-detaching device, and the fact that this one is actually a nonlethal prop doesn't really matter. It's a guillotine.

As Sullivan continues his tour through the elaborate set of the Santa Rosa–based television series House on the Hill, it's clear that whoever erected this sprawling haunted mansion was thoroughly steeped in the classics: The Addams Family, The Munsters, The Ghost and Mr. Chicken.

"We've worked hard to include every Halloween-style element we can think of," says Sullivan, who co-writes and directs the show, created and financed by local software impresario Jeff Bodean.

Few would suspect that inside this unassuming office building near the Santa Rosa Airport, a 6,000-square-foot movie set has been built, crammed with gloriously gloomy bric-a-brac that looks like it was imported from Edgar Allan Poe's dreams. Glassy-eyed animal heads stare out from the walls. Slightly distorted portraits of oddly shaped relatives, festooned with faux cobwebs, hang beside an imposing pipe organ. Every clock is stopped at 10:31, a cheeky reference to All Hallows' Eve.

Even the dust-covered furniture looks like it was imported from Transylvania. The interior design, all Victorian wallpaper and soaring wooden columns, is tastefully augmented with armless statues of weeping angels and vase after vase of dead flowers.

"Our props and furniture," says Sullivan, "are a perfect blend of rare antiques, stuff purchased from Halloween stores and Ross Dress for Less and various things from Jeff's personal collection of Halloween decorations.

"Sometimes," he adds, "people send us things they don't want anymore. 'You have a severed head you don't need? Send it over!' We've become the epicenter of post-Halloween-prop disposal."

That said, this is one haunted house that is not open to trick-or-treaters. House on the Hill is very much a working television show, even if Sullivan and Bodean have only produced two episodes in the last two years, with a third getting ready to shoot.

Starring Bodean as burned-out rock star Vincent Van Dahl, the sitcom is a fish-out-of-water story, following Vincent as he retires from the world of rock and roll, moves in with his valet Livingston and a trio of fun-seeking groupies to a secluded house in the country, and soon realizes that the house is every bit as haunted as it looks. The show's tagline? "Paparazzi are annoying. Poltergeists are worse."

Bodean, who hired Sullivan three years ago to help bring his TV project to life, is the founder and CEO of Micromat, a Santa Rosa–based company that designs diagnostic software and other products for users of Macintosh computers. But locals know him best from his appearances in various public arenas—be it club-hopping in downtown Santa Rosa on weekends, commenting frequently on Press Democrat articles online, or, most famously, appearing on the Bravo reality show Millionaire Matchmaker.

It was while on an episode of Millionaire Matchmaker that Bodean realized people who produce television are often making it up as they go along. Bringing his well-honed DIY mindset to the project, Bodean assembled a team, wrote a script, built a set and started making his own show.

So far, House on the Hill has been televised only on Bay Area stations (with episode two running last weekend on KTVU), but the show has established a fan base on YouTube, with over 50,000 views. The project is an example of how rapidly evolving technologies are placing the tools of creativity into the hands of a wider pool of people than was the case just 10 or 15 years ago.

"It's definitely the most fun I've ever had," says Bodean, described by Bravo as a cross between Liberace and Mindfreak illusionist Cris Angel. Bodean agrees that his experience as a "tech geek," combined with his childhood knack for creating realistic science-fiction props out of household materials, gives him a perfect skill set for making a TV show.

"Last week, I wasn't completely happy with parts of the new episode," he admits. "So I called Dan, wrote some new lines, went to the studio, set it up and shot the new stuff. If this were Hollywood, that would have taken weeks. Hollywood is awesome, but it's a very slow-moving animal, whereas we can be much more nimble."

He's certainly eager to learn from his mistakes. House on the Hill's first episode is conspicuously, um, amateurish.

"Well, we didn't really know what we were doing." he laughs. "So we took what we learned from that first episode, and the second one is miles better than the first."

Bodean's inner child, one suspects, is thrilled at how far his adult self has come in terms of making props and special effects. When he and the crew first started, the FX were done old-school, with fishing wire and guys hiding behind the set wiggling suits of armor.

"By the second episode," Bodean says, "we were incorporating all kinds of CGI and green-screen effects here and there. You know that huge staircase in the background? That staircase is actually in the Ukraine, in some museum. But with the magic of special effects, it's now in our haunted mansion."

Anticipating the random snide remark people might make about a rich guy blowing his money on what might seem to be a vanity project, Bodean says he's having too much fun to worry what other people think.

"In terms of the cost, it really doesn't take that much," he says. "The set is awesome, yes, but we've cut a lot of corners and have managed to do this for almost nothing.

"As far as my personal investment in House on the Hill goes," he continues, "you just have to decide what matters and then do what you have to do. I was living the high life there for a while. I had a big house in Fountaingrove. I was driving a Bentley. And I got rid of all that so I could do this show. Now I live in a tiny little house, probably the smallest house I've ever lived in my life, but I love it, because now I can do what I love."

Bodean hopes that the show will eventually begin to pay for itself, through revenue streams he has yet to develop. But no matter what lies ahead for Bodean and House on the Hill, one thing's for sure: he's keeping the guillotine.

Arts Jeff Bodean The House on the Hill