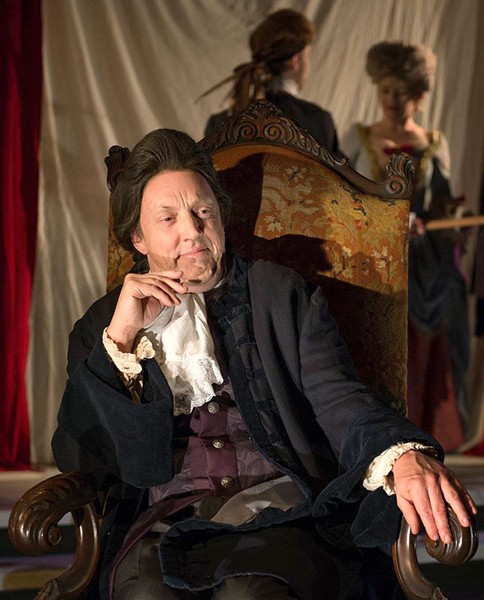 In Peter Shaffer's Amadeus, Count Franz Orsini-Rosenberg assesses Mozart's Marriage of Figaro with the criticism that it has "too many notes." Cinnabar Theater's current production suffers from the opposite—it's missing a few.

Amadeus is actually the story of Antonio Salieri (Richard Pallaziol), the most celebrated composer of his time. Salieri has dedicated his life to God and mankind in gratitude for God granting him the gift of musical talent. Enter Wolfgang Amadeus Mozart (Aaron Wilton), a crude, boorish reprobate, whom God has gifted with musical genius—for reasons Salieri can't fathom. Salieri, feeling mocked by God and unhinged by what he sees as a betrayal, seeks revenge on Him by destroying His vessel. He will bring about Mozart's ruin while seeming to be his friend, but he destroys himself in the process.

Shaffer's historical fiction won Tony awards for Best Play and Best Actor in a Play (Ian McKellen), and the film adaptation matched that with Oscar wins for Best Picture and Best Actor (F. Murray Abraham). Both Pallaziol and Wilton have their moments as Salieri and Mozart, with Pallaziol at his best when Salieri is at his most duplicitous. While Wilton succeeds in bringing a high level of obnoxiousness to his Mozart, there's little chemistry displayed in scenes he shares with Rose Roberts as Mozart's wife, Constanza.

Director Jennifer King, usually reliable and inventive, really falters here, as does scenographer Peter Parish. Parish brings little more than a few platforms and some haphazardly hung drapes to a play whose settings include an 18th-century Viennese palace. A large center scrim used occasionally for shadow projections went curiously unused for most of the production.

Parish's lighting design was also lacking, really only effective in a scene where Salieri collapses in frustration after he reads page after page of Mozart's compositions and finally succumbs to his genius.

Skipper Skeoch's period costume design had to do double-duty in providing a sense of time and place, with wigs and makeup by Jolie O'Dell also providing nice atmospheric support.

The show concludes with Salieri, speaking for all "mediocrities" in the world, absolving them. Sadly, that's not in my power here.