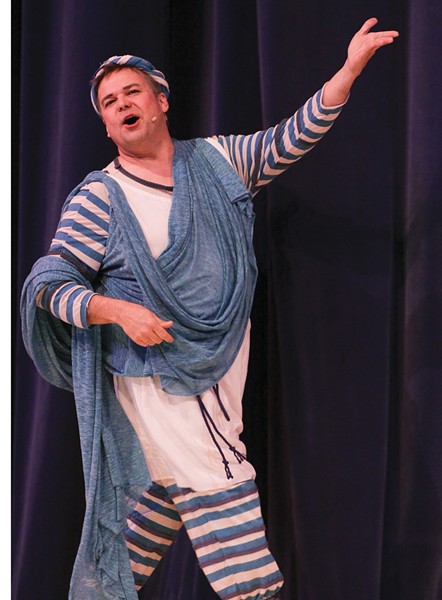 Those succinctly apt words from the classic song "Comedy Tonight," which opens the musical comedy A Funny Thing Happened on the Way to the Forum, pretty much sum up the entire enterprise. The amiably lewd 1962 musical delivers its first big laugh just seconds into the show, and it features a hilarious act of rag-doll infanticide. Set in the golden age of Rome, the show fuses the clever tunefulness of Stephen Sondheim's music with the bawdy naughtiness of the Larry Gelbart and Burt Shevelove's frequently funny script.

Presented by the New Spreckels Theatre Company, Forum has become a community theater staple over the last 50 years. Its medium-sized cast and entertainingly angst-free storyline have made it a popular choice for theater companies whose audiences like a dash of old-fashioned farce, PG-rated one-liners and wholesomely sexy coarseness with their Broadway-born shows.

This one requires an especially strong cast of comic actors to pull off, however, and an orchestra skilled enough to nail the challenges of Sondheim's music. Fortunately, director Gene Abravaya has assembled a coterie of local performers, veterans and newcomers alike, with enough chops and charm to elevate the show above its 10-piece orchestra's persistent problems with pitch and musical cohesion.

Musical directors Richard and Sandy Riccardi, known for their work with college and community theater troupes (and their own musical-comedy cabaret act), do keep the energy high, but if Spreckels Performing Arts Center is going to achieve its goal of becoming the go-to destination for North Bay musical theater, it's going to need a tighter orchestra.

When their lovestruck son Hero (Matthew Lindberg, appropriately wide-eyed) promises Pseudolus his freedom if he can score a hook-up with the lovely but unavailable Philia (Dene Harvey, wonderfully flirty), the scene is set for an evening of mistaken identities, misunderstandings, near misses and, of course, the deliriously contrived happy ending promised in the opening number.

Though hardly "important" theater, Forum reminds us that it is important to laugh now and then, and this one serves the laughs with fast and furious, sweetly infectious charm.