Mountain Play delivers for crowd of 3,000 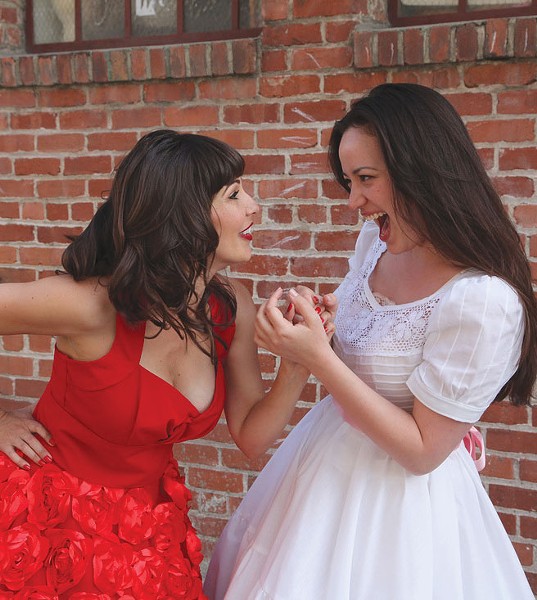 In West Side Story—Sondheim, Bernstein and Arthur Laurents' beloved '50s-era street-gang homage to Romeo and Juliet—two teenage New Yorkers meet by chance at a tense interracial community dance, and their forbidden love sets in motion a series of events hopeful and tragic.

For this all-important first-act meet-up to work, the audience must feel the electrifying, fateful connection between former gang member Tony and wide-eyed Puerto Rican émigré Maria. Hopefully, that electricity comes from the actors. Sometimes it arrives in other ways.

On opening day of the Mountain Play's presentation of West Side Story, atop Mount Tam in Marin County, the pivotal Tony-meets-Maria moment became something truly extraordinary when a beam of sunlight broke through the low-hanging clouds, shining directly down on Tony (Jerry Lee) and Maria (Mindy Lym). Dressed all in white, the two literally began to glow as we watched them fall in love before our eyes.

It's the kind of unplanned trick of nature that puts the Mountain Play among the most popular annual theatrical events of the summer. Putting on a show for an audience of 3,000 at the Cushing Memorial Amphitheatre means amping up the spectacle. Director Jay Manley certainly pulls that off. The New York streets-and-alleys set by Michael Locher is painted in moody purple, with random streaks of lamplight painted across the stage, approximating the feel of evening in the city.

Beginning without the traditional overture, the tale bursts into action with Manley's athletic cast invading the stage, beautifully dancing and fighting their way through the famous opening succession of Sharks vs. Jets skirmishes. With a first-rate orchestra under the direction of David Möschler, excellent choreography by Nicole Helfer and nifty fight work by Zoe Swenson-Graham, the dangerous romanticism of West Side Story unfolds with visual power.

As Maria, a strong-voiced Lym brings all the fiery giddiness one could hope for, and though Lee is much too old to play the teenage Tony, his full, operatic singing finds every scrap of melody in the gorgeous songs he sings. The rest of the cast are all very good.

Whether or not the sun makes the same dazzling appearance in every performance, the cast and technicians bring plenty of their own light and emotional razzle-dazzle to this highly enjoyable spin on a true American classic.