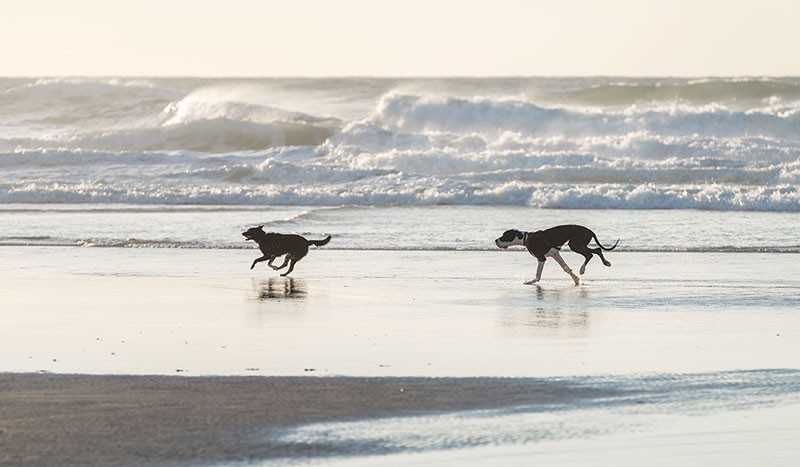 The very day that the National Park Service (NPS) was scheduled to finalize a restrictive dog management plan, it capitulated and halted the plan until further notice, in part due to the work of Laura Pandapas and Cassandra Fimrite, who simply wanted to keep walking their dogs.

Neither activists nor rabble-rousers, Pandapas, an artist from Muir Beach, and Fimrite, a Tam Valley mom of two teenagers and one black lab, took a stand against the NPS and its plan, which would have slashed off-leash dog walking by 90 percent and on-leash dog walking by 50 percent.

The NPS cited various reasons for the sweeping changes, including the protection of wildlife and newly planted native species, yet it provided no site-specific data to back up its claims. The women, who have been fighting the NPS for years, sought to ensure that it ran a fair planning process and complied with the law. They lobbied lawmakers, requested NPS documents, hired a lawyer and filed a lawsuit. For now at least, they have won.

"It's the birthright of everyone here to use the public lands of the [Golden Gate National Recreation Area] in the way that Congress intended," Pandapas says.

Congress established the Golden Gate National Recreation Area (GGNRA) in 1972. The land was designated a recreation area rather than a national park, because the open space was much needed in an urban setting like the Bay Area. A pet policy followed in 1979 that allowed dog walking on select portions of the GGNRA, which amounted to less than 1 percent of the land.

The idea of further restricting dog walking has been bandied about by the NPS for 15 years. In 2005, an attempt was aborted by the court for lack of proper public notice. The NPS began the necessary public process the following year. Meetings were held and public comment periods ensued, but dog devotees who attended the meetings cried foul. They became convinced that the NPS was not providing the public with adequate scientific studies to demonstrate the need for a change, and it seemed the government agency had a heavy bias against dog walking. The NPS decision, they said, was a fait accompli.

"There are tried-and-true conservation methods, such as a land buffer, seasonal buffers and time-of-use restrictions," says Pandapas. "The NPS could have given the public a buy-in, but they didn't. Instead, the only tool they employed was the removal of dogs."

The park service presented a draft plan with extensive changes in the dog rules last February. It banned all off-leash dog walking on the fire roads and trails in Marin, and left only Rodeo Beach for dogs to play off-leash. Concerned that the plan was too restrictive and did not address the impact on Marin County open space and local parks, the Marin County Board of Supervisors, the Mill Valley City Council, the Muir Beach Community Services District and the Marin Humane Society opposed the plan. Congressman Jared Huffman suggested off-leash access in some areas before 10am, as well as other compromises, but the NPS refused to budge.

The final dog management plan rolled out last month and was almost identical to the draft. On-leash trails in Marin had been cut from 24 miles to just eight miles. Then, on Jan. 10, when the NPS was to sign the Record of Decision and publish the final rule for dog management at GGNRA, it issued a press release stating that it was halting the plan until further notice.

Why the unexpected change on the part of the NPS? "We showed that the NPS had a systemic pattern of bias and inappropriate relations with external groups," Fimrite says.

When the NPS initially provided its draft plan, a coalition of dog and recreation advocate groups, including Marin County DOG (Dog Owners Group), an organization founded by Pandapas and Fimrite, requested public records from the NPS. The NPS refused to comply. The groups filed a Freedom of Information Act lawsuit to obtain the information, and a federal court recently ordered the NPS to produce the documents.

More than 260,000 heavily redacted pages trickled in and were methodically combed through by the four plaintiff groups: Marin County DOG, Save Our Recreation, SFDOG and Coastside DOG of San Mateo County, and their attorney Chris Carr, of Mill Valley, a partner with Morrison & Foerster.

On Jan. 4, less than a week before the final plan would be signed into the official record, the plaintiffs revealed examples of unethical and perhaps illegal conduct on the part of senior GGNRA officials and staff. They posted more than 40 damning documents on a website they called WoofieLeaks.

In one instance, former GGNRA director of communications and partnerships Howard Levitt, who retired last October, used his personal email account to conduct business regarding the dog management plan. And for good reason. The decision-making process was required to be unbiased, but Levitt had reportedly worked with several private organizations to stack the deck against dog walking.

Levitt also directed staff to destroy emails and discuss aspects of the plan offline. "Everyone: Please delete this and the previous message," Levitt wrote in a September 2013 email. "These conversations are best done by phone."

A GGNRA wildlife ecologist urged staff in a 2006 email to leave out data from the dog management plan environmental impact statement, because it did not jibe with the desired outcome—specifically, to virtually eliminate dogs in the GGNRA.

It also seemed that Levitt had a personal bone to pick with dogs. In April 2014, he wrote to Kimberly Kiefer of the San Francisco Recreation and Park Department about his broken finger: "Ironically, it's my middle finger . . . probably broke it expressing my opinion of out of control off-leash dog visitors."

"The level of hubris and arrogance contained in these documents is unfathomable," Carr says. "This is evidence of bad faith on the part of the government. The park service was bound and determined to get the result they wanted."

The documents that came to light on WoofieLeaks spurred the decision by the NPS to halt the signing of the plan and conduct an internal investigation. According to the NPS press release, "The decision comes in response to requests from members of Congress to extend the waiting period for the final environmental impact statement. This pause will also allow the National Park Service to conduct a review of certain records being released in response to an ongoing Freedom of Information Act request related to the park's Dog Management Plan and rule."

Congresswoman Jackie Speier believes that doesn't go far enough and has called for a "truly independent inquiry into whether NPS employees acted improperly with regards to their work on the GGNRA Dog Management Plan."

The NPS refused comment for this story and instead referred to two press releases that stated it would be investigating the documents.

"The records belong to us, the people," Carr says. For that reason, Carr and his clients will move ahead with the Freedom of Information Act lawsuit against the NPS. Fimrite considers the emails as proof that the entire plan must be thrown out.

"Someone has to address what happened in the GGNRA," Pandapas says. "The NPS can't seem to engage in an honorable process. What's happening in the Bay Area is nothing to be proud of."