Our annual food & wine issue goes between the bread

For what's basically a pile of stuff smashed between two pieces of bread, sandwiches sure are a huge part of our lives. And why not? They're compact, manageable, easy to eat and offer endless variations for a quick lunchtime grab.

But something's been happening to sandwiches lately. There's been a rush of innovation between the bread that nobody, not even John Montagu, Fourth Earl of Sandwich himself, could have expected. Especially here in the North Bay, where fresh, local ingredients are simply grace notes in a chef's sonata, sandwiches have undergone a makeover that's caused the rest of the country to put down their PB&Js and take notice.

For this year's Food & Wine issue, we've rounded up some of our favorites out of the literally thousands of sandwiches in the North Bay. You'll notice we haven't forgotten the turkey-and-swiss corner store creations, but we're glad to share plenty of new discoveries, too, geared to inspire special out-of-the-way detours with friends.

The funny thing about all this is that once we got going, we could have written about five times as many sandwiches, easily. All for a pile of stuff smashed between two pieces of bread!

A sandwich really becomes a sandwich when sliced in half to reveal its layers of hidden goodness. This cross-section view should always be a visually stunning work of art, and Ray's Deli in Petaluma showcases that ideal. There are many reasons to visit this off-the-strip deli and tavern, but the sandwiches could be number one. A variety of staples created by a couple of Cotati foodies who took their culinary curiosity out of the kitchen and into the storefront continuously elevates the sandwich to the level of gourmet cuisine. Take, for example, the Chickabacon. Seemingly simple: diced chicken breast, bacon, mayonnaise, lettuce, tomato and cheese. But when each ingredient is pushed to its best, the results are phenomenal. Free-range chicken, real, thick-cut bacon, red pepper aioli, fresh lettuce, ripe tomato and fresh-sliced cheese. The Ray's roll, baked each morning, is soft and light, highlighting the flavors it is sworn to protect. This is no five-dolla footlong, because unlike a certain corporate chain deli's flavorless dreck, it actually tastes like something (and it's a little more than $5). These sandwiches are a treat, a reward for a job well done or just a congratulations for making it halfway through the workday. Isn't that what a sandwich should do? Ray's Deli, 900 Western Ave., Petaluma. 707.762.9492.—Nicolas Grizzle

Redd Wood in Yountville is the new restaurant from Richard Reddington, owner of Redd, also in Y-Town. The restaurant serves wood-fired pizzas and other Italian-inspired dishes, but on a recent visit, it was the pork belly BLT that caught my eye. Bacon, as I'm sure you know, is made from sliced pork belly. Reddington cranks up the pig factor by stacking well-crisped chunks of wonderfully fatty pork belly along with a tart-sweet tomato marmalade and a buttery, crunchy handful of pale green inner romaine leaves between a perfectly toasted ciabatta roll amply covered with mayonnaise. Now that's a BLT. Redd Wood, 6755 Washington St., Yountville. 707.299.5030.—Stett Holbrook

Where do legends live? Tucked next to a Laundromat in the back of a grimy strip mall on an awkward side street near the family courthouse? If you're talking about the legend that is Noodle Bowl's banh mi, then look no further. There are plenty of Cambodian dishes at play here, but the banh mi's the thing. A staple of Vietnamese street food, banh mi are compact and filling, and Noodle Bowl's version hosts carrots, cilantro, cucumber, daikon, mayonnaise and your choice of BBQ pork, beef, chicken or tofu. A Cousteaux Bakery roll is the perfect finishing touch, and even as we've watched its price rise from $3 to $4, and now $5, it's still a worthy lunchtime detour. Bring your friends who've never heard of banh mi, and blow their minds. Noodle Bowl, 821 Russell Ave., Santa Rosa. 707.843.5256.—Gabe Meline

The hot eggplant sandwich at the Willow Wood looks like a veritable vegetarian's delight. After all, it's made with eggplant, skinned and roasted red peppers, feta, walnut pesto and homemade roasted-garlic mayonnaise. The kicker is the anchovy. Still, it's the eggplant that makes this sandwich a legend beyond Graton. Sliced and tossed with olive oil, it's roasted on a cookie sheet in a hot oven until caramelized. The bread, from the Village Bakery in Sebastopol, is fresh and thinly sliced. The chef spreads pesto on one slice, the garlic mayonnaise on the other, with the eggplant and red peppers layered one on top of another with French feta as the final addition. Then it's roasted in the oven on a pizza stone until the cheese melts and the flavors combine. Matthew Greenbaum, its creator, says, "I usually don't like eggplant, but I love this sandwich." Potato salad, olives and pickles come with the plate. Willow Wood Market, 9020 Graton Road, Graton. 707.823.0233.—Jonah Raskin

Lombardi's is set 50 yards back from the road, but that doesn't stop the Petaluma institution's pungent BBQ aroma from wafting into the fast lane and causing near-misses as drivers yank their steering wheels westward toward the source. Inside, the small deli oozes old-world Petaluma; flyers for livestock dot the bulletin board, and tractors are sometimes even parked out front. The menu peers down over an always-busy counter, and though the Mama Lil's sandwich with peppers is a solid second choice, those who want some serious slop should go for the Killer Joe's. A full half-pound of tri-tip hot from the front-porch smoker would be enough to justify the eight-dollar price tag, but add not only melted horseradish cheddar but horseradish mayonnaise, and you've got a sandwich that bites back. Comes with tomatoes, onions, and 245 napkins—you'll need 'em.Lombardi's Deli, 3413 Petaluma Blvd. N., Petaluma. 707.773.1271.—Gabe Meline 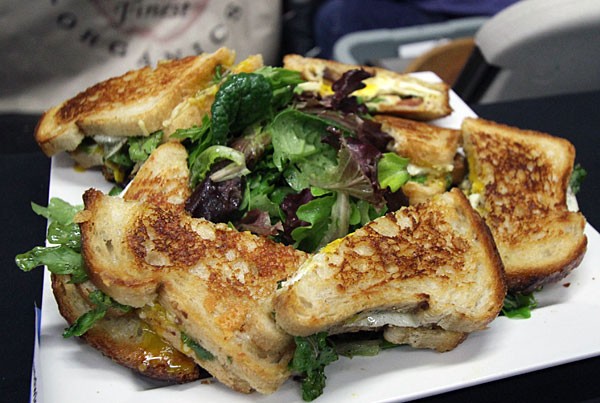 The absolute best part of the 2012 Battle of Brews, held recently in Santa Rosa, was the thrill of getting to discover the farm fried egg, bacon and blue lyonnaise grilled cheese sandwich from the Farmer's Wife. Made on perfectly grilled Full Circle organic sourdough bread, this French-inspired sandwich features an addictive mix of organic egg and craft bacon stacked on a rich, melted blend of Point Reyes Farmstead toma cheese, Irish Dubliner and Strauss cheddar. (Not surprisingly, the sandwich ended up being voted "Best in Show" by a panel of judges out of 21 entries at the Battle of the Brews "'Wich Hunt.") Owner Kendra Kolling says that her catering and food business started as an offspring of Nana Mae's Organics, the well-loved Sonoma County heirloom apple juice company that she runs with her husband. But this year, the Farmer's Wife has started making a name for itself, successful enough to be asked to cater a family birthday party for Tyler Florence at his Mill Valley home, where the farm egg sandwich, naturally, was a huge hit. For now, folks can pick up the award-winning grilled cheese along with a rotating cast of seven to nine sandwiches at the Sonoma farmers market, the San Rafael Civic Center Farm Market and the Marin Country Mart in Larkspur. "I'm making sandwiches in parking lots to help finance my dream," says Kolling, who has been working steadily to secure a spot for a craft cannery and kitchen in Sebastopol's new food and wine center, the Barlow.—Leilani Clark

There's a customer at Mac's who is on a mission to eat all 49 sandwiches on the menu, which sounds like an easy feat until one considers sandwich No. 24, made with tongue, chopped chicken liver and onions. "The other weird one is the sardine sandwich," says waitress Courtney Carretta on a recent weekday, "but I won't make you eat that one." Oh, really? I take this as a challenge, and order it. Carretta visibly winces, but five minutes later plops the plate in front of me, offering Pepto-Bismol if needed. But when I heave a mighty bite into my mouth, I'm surprised when the sardine sandwich is in fact completely delicious. Its construction is simple—just fish on bread, no fixin's—and the soft roll balances any salty or oily features of the sardines. After a second bite, owner Toraj Soltani sidles up. "Can you take it?!" he asks. Take it? I devour the whole thing, and, heck, I might even order it again. Here's to adventure! Mac's Deli, 630 Fourth St., Santa Rosa. 707.545.3785.—Gabe Meline