A rising chorus criticizes wineries' hoarding of unregulated groundwater. Is dry-farming the answer?

Note: This is the second in a series on the wine industry's impacts on the environment.

Tyler Heck remembers the summer days that often sent him down the hill from his family's home off Erland Road and into the cool waters of Van Buren Creek for relief. He remembers diving into the water and swimming, even in July and August. It was the 1980s.

Heck, now 32, says several nearby vineyards—which have grown in size—have taken the water, draining the ground below via wells and pumps. Three neighbors, he also reports, saw their wells go dry three years ago. At least one has had to pay trucking companies to deliver water.

"And that's just so they can have a drink and take a shower," says Heck, whose own well still produces but seems fated to go dry soon. A decade ago, the water level stood 150 feet belowground; it has since dropped 500 feet. Still, development in the area continues, and a proposal by Heck's adjacent neighbor to subdivide his property and build a second large home is now under review by the county.

Heck suspects the man, allegedly a Texas-oil millionaire who wants to sell the property, is going to plant several acres of vines to increase the appeal of the real estate. Heck lives at 1,300 feet of elevation, at the end of a long, winding road. Trucks carrying tons of water could never reach the top, he says, and Heck is formally appealing to the county on March 10 to block his neighbor's building proposal, which Heck fears will facilitate the disappearance of his water supply. The widespread practice of spraying vines to protect them from nighttime frost would use even more water.

Heck's personal crisis reflects a greater issue affecting the entire state: the unregulated overallocation of groundwater. California is the last state in which groundwater use remains virtually unregulated and unrestricted, according to Natural Resources Defense Council's senior policy analyst Barry Nelson. Anyone willing to drill for it and pump it from the earth can do so, free of charge, and the only restriction, it seems, may be the availability of water itself—and according to experts, it's running out. In 2003, state hydrologists estimated that Californians are overdrafting their groundwater supplies by 1 million to 2 million acre feet per year.

"We're pumping it out faster than Mother Nature recharges it," explains Nelson, who has closely studied the state's groundwater and its relation to surface water, and who believes that overdrafting has grown worse in the past eight years. The problem has been most severe in Kern County, where dramatic land subsidence—as much as 30 vertical feet—has occurred as tremendous volumes of water vacate the ground below via wells. The Cosumnes River, a major tributary of the San Joaquin, has entirely disappeared in recent summers, Nelson says, because it's been drained dry from below. In the South Bay, too, land has subsided measurably.

South of Sonoma, wells have reportedly begun drawing up saltwater as San Pablo Bay's waters encroach to fill the void left by overdrafting. And Mark West Creek, which once ran year-round, now disappears each summer, as reported Jan. 26 in the Bohemian.

A 2003 report prepared by Kleinfelder Inc. for the Sonoma County Permit and Resource Management Department found "a clear trend of increasing average well depths over time" in three North Bay study areas; in the west Sonoma County Joy Road study area, well depth had increased from "about 50 feet in 1955 to over 140 feet in 1990"; in the Mark West study area, "about 120 feet in 1950 to about 300 feet in 1997"; and in the Bennett Valley, north of Sonoma, "from about 150 feet in 1940 to about 350 in 1990." Though individuals have suggested that landowners may simply be drilling wells from increasingly high elevations, the Kleinfelder report concluded that the water table itself is dropping.

Jim Doerksen, a retired South Bay hydrologist who now lives just a stone's throw from Mark West Creek and not far from Tyler Heck's residence, says that two vineyards upslope of him have drilled at least nine wells. The deepest is reportedly 1,200 feet and has gone dry in the recent past, Doerksen says, and in 2008 and 2009—years in which residents of Santa Rosa were asked to stop watering their lawns and curtail water use, due to drought—tanker trucks rumbled from Santa Rosa uphill past his home every day, carrying water to feed the vines. Two natural springs that once supplied Doerksen's and a neighbor's home with all their domestic water needs for more than a century petered out four years ago.

"If you take water faster than the ground is recharged, the water that's coming out of the ground stops, and the springs start flowing in reverse, back into the ground," he explains. "That's what's happening here." 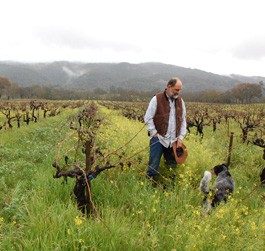 Evidence, both scientific and anecdotal, seems to clearly indicate that wells can drain streams from below, drying out mountainsides, stranding fish and leaving property owners high, dry and thirsty. Yet state water managers have not officially recognized a connection between groundwater and surface water, Nelson explains, though most hydrologists do. As a result, groundwater is essentially ignored, largely unmanaged and free for the taking.

"Anyone who wants can go punch a new well and take all the water they want," says Nelson, who likens the lawless situation to the early days of western America.

"In many ways California thinks of itself as still being part of the Wild West frontier," Nelson says. "But the hydrological frontier has closed. We're out of rivers we can tap into, and we're out of groundwater supplies. The next frontier is going to be efficiency."

The state's chronic water shortages have spurred a new interest in an old trick among farmers, one as old as agriculture yet almost obsolete today: dry-farming. Its underlying principle, that plants can grow without ever a receiving a drop of irrigated water, runs counter to what many people today believe they understand about gardening and growing. But for ages, dry-farming was the way of the agricultural world.

Even today, the system remains the standard grape-growing practice in the bone-dry summers of Greece, Italy and Spain. In California, a century's worth of farmers never watered their crops, and only with the advent of drip irrigation in the late 1960s and 1970s did dry-farming all but vanish.

More than 100,000 acres of wine grapes—about 20 percent of the state's vineyards—grow in Napa and Sonoma counties, making up about 95 percent of the region's cultivated land. Most are generously irrigated, and Dehlinger in Sebastopol, Bucklin Old Hill Ranch in Glen Ellen and Frog's Leap near St. Helena are among the few wineries with vines where decades have passed without a drop of piped water entering their soil.

At Frog's Leap, winegrower Frank Leeds guesses he saves Napa County some 64,000 gallons of water per acre per year through the practice of dry-farming. The same rate of savings could amount to several billion gallons of water annually in Sonoma and Napa counties if growers dry-farmed everywhere feasible.

Leeds, considered a local dry-farming guru, believes about 90 percent of Napa County's traditional, valley-floor grape country could be dry-farmed. The practice, he says, requires appropriate soil types capable of holding water like a sponge. It also demands intensive labor, a season-long regime of tilling and massaging the soil to maximize its so-called capillary action, which draws moisture up from below.

Many winemakers simply aren't game. Leeds tells of a Napa grape grower who years ago transitioned the family property to irrigation, abandoning a dry-farming tradition. When Leeds' uncle, a dry-farmer, quipped that the man's late father would roll in his grave if he saw the black plastic pipes laid across the family vineyards, the man, according to Leeds, replied, "But it's so easy. I can just turn on the water, go to town and see a movie."

Today, as little as 5 percent of the state's vineyards are dry-farmed. Paul Dolan, who lives and grows grapes near Ukiah along the upper Russian River, believes that will change.

"Dry-farming will be an important adaptation to climate change and an important element to build into our vines in the future," says Dolan, who grows a portion of his grapes without irrigation.

The Community Alliance with Family Farmers is actively pushing a dry-farming campaign. The group has hosted five seminars in the North Bay wine country since 2008. As many as 150 interested winemakers and farmers have attended each event. Board member Janus Holt Matthesis believes "dry-farming will be a hard sell" among larger, more profit-oriented wineries. Will Bucklin, of Bucklin Old Hill Ranch, believes the same. He dry-farms a 130-year-old vineyard and is now weaning his 12-year-old Zinfandel vines off their water. But a neighbor is doing just the reverse, introducing his old vines to irrigation to increase his fruit yields, which can increase dramatically when vines are pumped with water.

On arid hillsides, dry-farming may not be possible. Stu Smith at Smith-Madrone Winery says he manages with little to no irrigation ("If I can dry-farm in these mountains," he observes, "then everyone in the valley should at least be thinking about it"), but most winemakers in the hills must drill wells. Tyler Heck himself is a winemaker with John Tyler Wines in Healdsburg. Heck, who makes a living in the wine business, says many winemaking operations are financially unsustainable due to the cost of acquiring enough water. He speaks of three wealthy neighbors who have invested in their own wineries.

"They aren't even making any money, but they have unlimited resources to truck in water when this hillside goes dry," he says. "They don't give a damn if we run out of water. These vineyards are just ego trips for them. Some of us [make wine] for a living. For them, it's just a place to invite their friends."

Jim Doerksen, too, believes the vineyards surrounding him, including Pride and Fisher, should never have set roots in such arid country.

"These guys in the hills can't dry-farm," says Doerksen. "There's not enough water. They have no business being here—absolutely none."