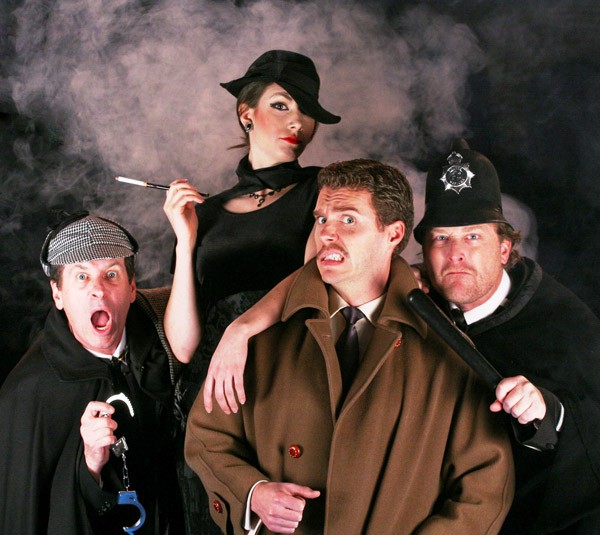 In 1935, Alfred Hitchcock directed a loose adaptation of John Buchan's 1915 novel The 39 Steps, adding a sexy female spy and a skittish blonde love interest to Buchan's otherwise sex-and-love-free story. The film is now considered one of the great English films of all time, so one could make the case that the drastic changes Hitch put in place were, in the end, a pretty good idea.

The same could be said for the Tony award–winning 2009 stage adaptation, which gives Hitchcock a dose of his own freely interpretive medicine by taking the beloved black-and-white film and turning it into the broadest of comedic farces, a naughtily inspired fusion of spy-thriller intensity and Monty Python–style outrageousness.

Gleefully directed by Craig Miller, with a strong sense of visual invention and a clear knack for preposterous comic physicality, the play is essentially a show within a show as a quartet of actors rush and stumble, attempting to transport the movie onto the stage. When cues are missed or telephones ring on after they've been answered, the looks on the actors' faces as they gamely try to salvage the moment are priceless. Featuring solid, satisfying performances from the agile, fearless cast, the joy of this production is witnessing how much hilarity good actors are able to milk from what must be fairly dry material on the page.

In 1935 England, Richard Hannay (Adam Burkholder), a bored Londoner, is catapulted into a series of life-and-death adventures when he meets a mysteriously sexy secret agent, Annabella Schmidt (April Krautner, who plays all of the other women as well).

After telling Hannay about a plot to destroy England, masterminded by an evil genius with a missing pinky finger, Annabella ends up dead, a knife in her back. The bit where Hannay attempts to escape from under the femme fatale's dead body is an early highlight. Accused of her murder, Hannay escapes to Scotland to get to the bottom of the mystery, pursued by the police and various dangerous henchmen, encountering a parade of strange characters along the way (all of them played with magnificent elasticity by Larry Williams and Paul Huberty).

Though the energy lags a bit in the second half, and some of the gags stretch a bit too long, The 39 Steps still packs more laughs into a single night than most shows capture in a month-long run. As a new year begins, this one is a winner.