New deal at Lawson's Landing spells the end of an era—but will it also be the end of Lawson's?

The woman then strikes up a conversation with an elderly woman in a big floppy sun hat seated on a bench. They begin shouting things at and past each other about having relatives who arrived at Ellis Island, back when, you know, immigration was immigration.

"Trump was absolutely right!" one of them exclaims.

"They want Sharia law in Sacramento, there's going to be a problem!" exclaims the other.

How about we take a stroll among those cool trailers! While it's still going, the trailer community offers a fascinating glimpse into a particular variety of coastal Americana. There are numerous varieties, but the tin-can aluminum rectangles that jut out at rakish angles—those are all over the place and stand out; they are the characteristic Spartan Trailer design from the 1940s and '50s, when America again took to recreational pursuits after the Great Depression and an even greater world war. The overall feel of the joint is exquisitely ramshackle, but not down-at-the-heel.

Lawson's Landing is akin to the all-but-vanished American drive-in movie theater, a last vestige of a bygone era centered on leisure and motion—and geared toward working and middle-class families.

And there's no question that the trailer owners are holding out for that last briny breeze, the end of the endless summer in these salt-encrusted and well-worn domiciles. So far it appears that nobody's yet left the premises.

Meanwhile, there are decades of accrued character and memories to contemplate and enjoy: glass Japanese mooring balls in the windows of a few trailers, signage with proud declarations that this is our summer home. As a sign of things to come, there are "For Sale" signs everywhere. There's also a bunch of golf carts, a "Grateful Dead Way" street sign, variously constructed deckage and driftwood bric-a-brac, a living museum of accumulated flotsam and jetsam.

The rent is cheap, $400 to $500 a month, and the view is world-class, looking across to the untrammeled Point Reyes National Seashore wilderness area.

Jerry Knedel is cleaning his boat near his trailer after a morning fishing trip, and he pulls a couple of dripping lingcod and a salmon from his fish box and tosses them to a friend. Knedel and family have been coming here for 56 years, and he speaks of possible scenarios where a hotel like the Ritz-Carlton buys up the land from the Lawson's, builds a fancy resort, and just like that, it's all over for the working man. Knedel just can't see how Lawson's can swing this state-mandated transition. 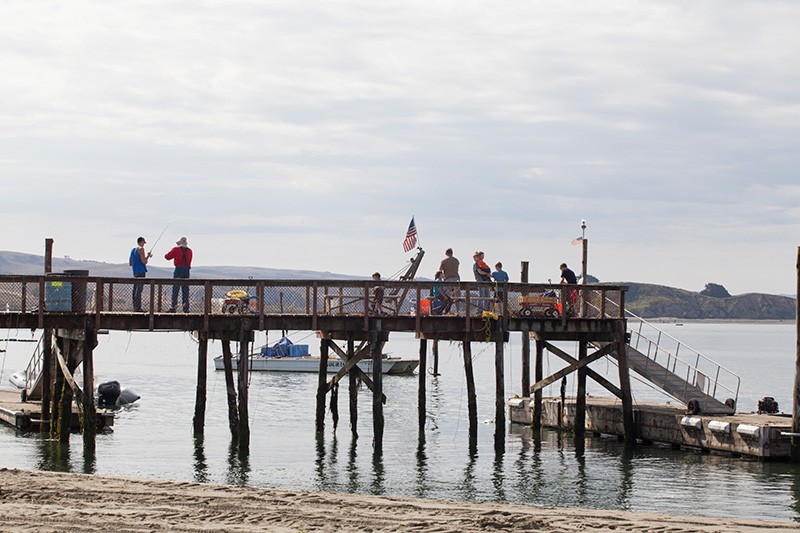 The family says it plans to use the freed-up space for non-permanent trailers, which Knedel describes as "1 percent campers," big rigs in need of multiple hookups, which the Lawsons will install once the long-term trailers are gone.

Knedel says, and Lawson confirms, that the rents have gone up in large measure to help the Lawson's pay their lawyers and consultants. He recalls that the rent was $19 a month when his family started coming here.

"The spikes in rent," Knedel says, "were the result of lawsuits to oppose Marin County, the coastal commission and the Marin County supervisors who have drummed up multiple bogus offenses" to drive the business to a brink of unsustainability.

But the halibut bite's been good, he adds.

Meanwhile, Vogler is in his office in the fishing station, chock-a-block with maps and memorabilia, and there's a toddler rocking away in one of those egg-shaped thingamabobs. Vogler's kids are out front tending the retail shack—get your bait, get your ice cream bars here, sit on the bench out in front and take it all in, xenophobic outbursts and all.

As he describes the various twists and turns along the way to a final deal with the state, a Lawson's worker comes in and tells him that a boater has had a problem—his prop was fouled by a fallen marker that was used to indicate a nearby sandbar.

The exchange gives a rich insight into how to properly run a family business that's geared toward families. "Give him a new prop," says Vogler, arms akimbo as he laughs, "but he's not getting another one after this!"

END OF AN ERA

Mike Pfeifle and Robert Roth are friends from Lodi who've just returned from a spearfishing adventure out in Tomales Bay. Their quarry was halibut, and Roth says he speared a nice one that morning—but nothing on the order of the 32 pounder he once lanced here.

The men are hanging around in front of a rare sight along the seawall and trailer area: an abandoned trailer that's all torn-up inside, no doors or windows, totally junked-out.

Pfeifle owns a trailer over on lot A-13 and Roth, with a hearty chuckle, describes himself as his free-loading friend. Roth says he brought two granola bars with him from Lodi but hadn't yet eaten them: there's a lot of communal food-sharing going on among the trailer owners.

Roth says he's been coming here for 30 years but has had a permanent camper here only for the last eight. Roth is a bus dispatcher back home; Pfeifle works in hazardous waste, he says.

Pfeifle says he's gotten used to the idea that an era is coming to an end, and he'll keep coming out here even after his trailer's gone. He'll keep spearing and gigging halibut, and diving for abalone, and he'll keep telling the story around the campfire about that time the great white shark showed up.

He's going to hold out through the year. "I'm pulling mine out in January," Pfeifle says, still wearing the wetsuit from the morning spearfishing trip. "It's been on the horizon," he says. "I've gotten used to the idea."

Roth leans against the abandoned trailer and revels in what he calls the great appeal of Lawson's Landing. "The beauty here is the pride that people have in these salted, sometimes rusted trailers," he says, "the uniqueness that you continually see here." He speaks of the blending of people, the unforced multiculturalism, and says the resort functions as a sort of "great equalizer," where people of all races and persuasions gather.

There are pot-luck dinners after everyone's come back from their fishing trips, he says. "It's all about the tribal experience, the coming together after the fish-hunting. That's going away, and that is unfortunate for the next generation."