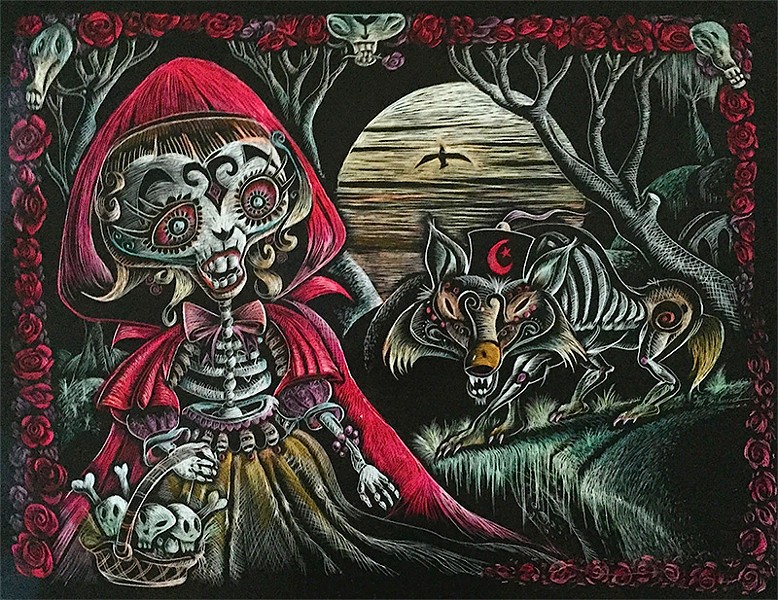 The sugar skulls and festive altars popping up around Petaluma are designed to honor rather than scare, as the Mexican tradition of El Dia de los Muertos, the Day of the Dead, once again envelopes the town.

Now in its 15th year, the annual celebration takes the traditional Mexican holiday of remembrance and turns it into a month of special events and art shows. And this weekend, several Petaluma galleries and museums open their shows to get the celebration started.

For artist Marc Schmid, a longtime North Bay resident who has lived in Mexico and Spain, the Day of the Dead is as artistic as holidays get. "If you've ever been to Mexico, and you're driving along, you'll see little art pieces on the side of the road," he says. "There's a Christian symbol in there or a tequila bottle or a photograph. And as it grows, it becomes a beautiful work of art."

Working as a cartoonist and caricature artist for 40 years, Schmid was invited by the owners of Heebe Jeebe in downtown Petaluma to create a new show for their Back House Gallery inspired by the Day of the Dead. Schmid not only conceived of the new show, "Dreams of the Dead," (opening Saturday, Oct. 3, with a reception at 7pm), but he worked for the first time in scratchboard.

"It was a very experimental process," he says. Scratchboard involves scratching away at a black painted canvas with a knife to reveal lines of white underneath.

Once Schmid found the flow, he began expanding his small traditional pieces into elaborate scenes of fairy-tale figures depicted in the skull-and-bones style of the Day of the Dead. The artist also experimented with dyes to incorporate the vivid colors the holiday is known for.

"There's a certain humor and whimsy in Mexico, too," says Schmid. "I know it's still there. A lot of it has been lost lately, but the spirit is still there."

Schmid's show is one of several exhibits showing around town. The Petaluma Historical Library & Museum's features a community altar and art from Bay Area–based Latino artists. It also opens Oct. 3.

Aqus Cafe and other downtown spots also get in on the festivities, which continue through October with various community events. Mezcal tastings, cemetery tours and poetry readings are all on the calendar, and the month-long celebration culminates on Sunday, Nov. 1, in a procession that runs from Water Street Bistro to the Petaluma Historical Museum.

Last year's parade drew thousands of spectators and participants who joined together in honoring those who've passed on with song and dance, food and drinks, giant life-sized puppets and family-friendly activities.