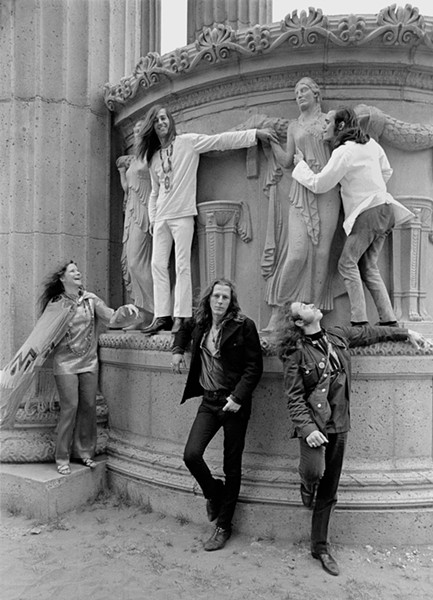 From the Beach Boys to the Grateful Dead, California has been home to some of the most iconic rock and pop music of the last 100 years, and the state’s musical culture is still going strong.

Look back on the early days of West Coast rock ’n’ roll, as the Sonoma Valley Museum of Art presents a new exhibit, “California Rocks! Photographers Who Made The Scene, 1960–1980.”

The museum’s exhibition celebrates the role photographers and their images play in the history of California’s music culture, with over 60 photographs capturing iconic performers over several decades.

“‘California Rocks! Photographers who Made the Scene, 1960–1980’ is a wild ride celebrating the history of rock ’n’ roll in California,” says Linda Keaton, Sonoma Valley Museum of Art executive director, in a statement. “The images and photographers in the exhibition make it clear why California was at the epicenter of cultural and social change during rock’s golden age. In light of the lack of concerts this will give not only art lovers, but rock music lovers, another outlet for fulfillment.”

The exhibit is curated by author and former San Francisco Chronicle music-critic Joel Selvin, who’s career covering Bay Area music goes back to 1970. His writing has appeared in publications worldwide and he has authored more than 20 books, including New York Times bestseller, Red: My Uncensored Life in Rock, with Sammy Hagar.

“These photos are so great, you can see the music,” Selvin says, in a statement. “And there will be a lot of famous people on the walls, but the real star is California.”

The exhibit includes images of California artists and bands, as well as photos of iconic figures performing in the state over the course of 30-plus years. Highlights include a photo by Robert Campbell of Elvis Presley performing in 1956 at Oakland Auditorium; a shot by Baron Wolman of Big Brother & The Holding Company hanging out in 1968 at Palace of Fine Arts in San Francisco; an image by Michael Malloy of Little Richard at the Whiskey a Go Go in Hollywood circa 1969; a photo by Henry Diltz of Bonnie Raitt, Maria Muldaur and Linda Ronstadt backstage at the Santa Monica Civic Auditorium in 1974; and a shot by Steve Ringman of Talking Heads playing live at the Greek Theatre in Berkeley in 1983.

One of the most compelling images in the exhibit is a shot of the Rolling Stones performing at Altamont Speedway in 1969. Captured by Beth (Sunflower) Bagby, the image features a member of the Hells Angels biker gang in the foreground with his back turned to the camera. Behind the Hells Angels member, Rolling Stones frontman Mick Jagger can be seen on stage looking to the right, a grim expression on his face. The 1969 Altamont Festival infamously hired the Hells Angels for security, and members of the outlaw motorcycle club went on to murder 18-year-old African American man Meredith Hunter during the Rolling Stones set.

“California Rocks!” is the first exhibit to open at the Sonoma Valley Museum of Art since the Covid-19 pandemic closed businesses for the purpose of social distancing in March. “The health and safety of museum visitors is our utmost priority and SVMA will be complying with all federal and state guidelines as well as any additional measures that might be needed to further enhance the safety of our visitors, volunteers and staff,” wrote the museum in a statement. “SVMA is also exploring options to present this exhibition online.”

SVMA asks that people with symptoms not visit the museum, and requires face coverings for all visitors and staff while in the museum. Disposable masks will be available for those who do not have one. SVMA also asks that visitors observe social distancing in the museum, which will enforce a capacity of 21 people.

In addition to these iconic images, the exhibit will also feature a special photo homage to local rock ’n’ roll vintner Bruce Cohn, who produced the annual B.R. Cohn Charity Events Fall Music Festival for 29 years. The homage will include photos taken by Bay Area photographer Pat Johnson, and Cohn will also pour his Trestle Glen wines on select occasions throughout the exhibition run.

“California Rocks! Photographers Who Made The Scene, 1960-1980” opens on Wednesday, July 1, at the Sonoma Valley Museum of Art, 551 Broadway, half a block from Sonoma Plaza. Scheduled museum hours are Wednesday through Sunday, 11am to 5pm, though hours may be subject to change. General admission is $10 and free for SVMA Members. Get additional information and updates at svma.org.