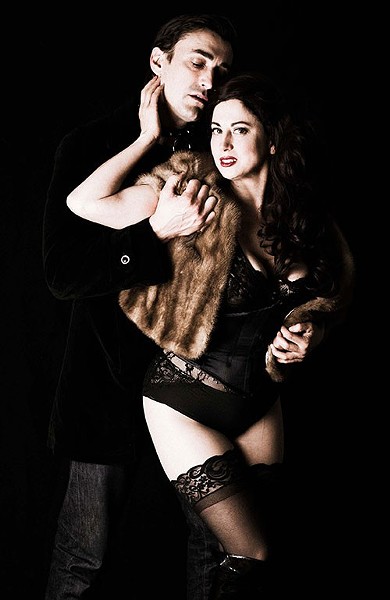 "Battle of the sexes." That phrase dates back to 1914, when the notorious filmmaker D.W. Griffith (Birth of a Nation) released a blatantly sexist film with that title. Ever since, how that battle is fought has vastly evolved. Consider, for example, the massive differences between Lerner and Lowe's beloved 1956 musical My Fair Lady, and David Ives' spicy 2011 comedy-drama Venus in Fur.

Currently running at San Rafael's Belrose Theater, in a production directed by Carl Jordan and presented by Marin Onstage, Venus in Fur is a two-person examination of sex, power and the pleasures of pain. When a frazzled wreck of an actress (excellently played by Melissa Claire, alternately ditzy, sexy and scary) shows up late to an off-Broadway tryout, she convinces the frustrated playwright-director (Tyler McKenna, quite good in a tough role) to let her audition.

What follows is a series of escalating power trips, challenges and sexual intimidation, in which the rules and the roles change several times. Very adult, very funny, and full of surprises, this is a play designed to make you rethink how women are traditionally portrayed in theater and literature.

Much tamer, in comparison, is My Fair Lady, itself a taming-down of G.B. Shaw's furious social critique, Pygmalion. Impressively sung—if poorly supported by a spotty orchestra—the current production at 6th Street Playhouse has its pleasures, including a marvelous Norman Hall singing one of the show's most famous songs. The production is directed with obvious affection by Craig Miller, who employs some impressive touches (crumpled poetry; a well-timed tear) that, despite their cleverness, can't quite make this dated, tired show seem less like the out-of-touch dinosaur it is.

As the self-impressed professor of linguistics Henry Higgins, David Yen is thoroughly entertaining, though not very likable, gleefully aiming a barrage of insults at Eliza Doolittle, an unhappy flower girl who asks him to teach her proper English enunciation. As Eliza, Denise Elia sings the part beautifully, effectively underplaying the character's usual fire, thus emphasizing Eliza's fear and uncertainty—making Higgins even less likable in the process.

That has always been the primary failure of My Fair Lady: a "love story" in which the last thing we want is for main characters to fall in love.