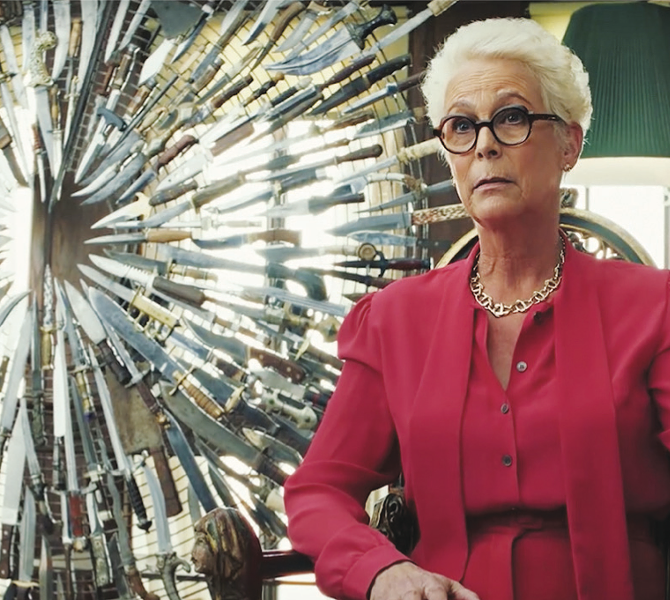 Middling, but not without surprises, Knives Out is Rian Johnson's mystery about a group of greedy heirs in ugly holiday sweaters.

They're the descendants of writer Harlan Thrombey (Christopher Plummer), author of The Menagerie Tragedy Trilogy and other best-selling bafflers. The morning after his 85th birthday party, the old man was found with his throat cut–an apparent suicide. The deceased was no stranger to the macabre. "He basically lives on a 'Clue' board," says the investigating Lt. Elliott (Lakeith Stanfield of Sorry to Bother You); it's a turreted Victorian manor floating in a sea of dead leaves, with hidden entryways, creaky floorboards and sinister-doodads galore.

Harlan's parasitic family isn't exactly weeping over the senseless waste of human life. They include designer Jamie Lee Curtis whose business Harlan's checkbook propped up, and her loafer-husband Don Johnson. Their son is a professional wastrel (Chris Evans handles this anti-Captain America role well). Another son is grumbling Michael Shannon, limping on a cane; he's furious at the old man's refusal to sell his work to the movies.

On scene is Daniel Craig's Benoit Blanc, "Last of the Gentlemen Detectives," recently profiled in the New Yorker. ("I read a tweet about the article," says another suspect, Toni Collette's Joni, burnished by unnatural skin bronzers.) Craig uses a Southern accent, with more molasses in it than the one he used in Logan Lucky. This diction increases Craig's likeness to Robert Mitchum. What's uniquely his own is the satisfactory way Craig wears his fine clothes, dandles his cigar and utters Gothic comments about "vultures at the feast, knives out, beaks bloody!"

To him, the case is a sort of donut, the hole beckoning. This metaphysical donut is mirrors frightening living-room sculpture: hundreds of knives, all blades pointing to a vortex.

Johnson's superb emulation of Hammett and Chandler in his debut Brick (2006) gave us a more energetic mystery, and this sputters a bit by comparison. But he does have a purpose, beyond pastiche: Knives Out is Thanksgiving entertainment for those seething at their relatives over the turkey carcass.

'Knives Out' is playing now.