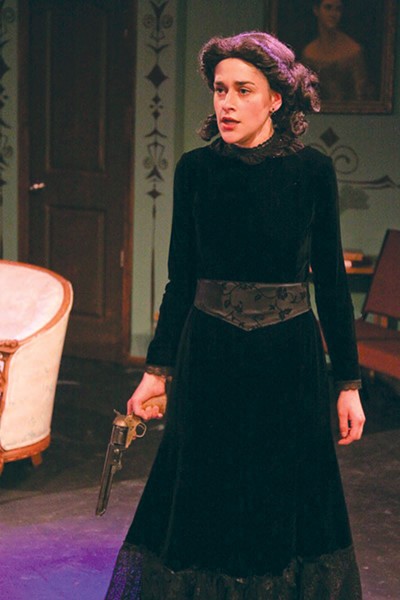 Short plays are tricky to pull off, but when done well, they can deliver a lot in a small package. With Valentine's Day looming, two local companies are offering separate showcases of short, comedic plays, all written in the language of love.

In the intimate Studio Theater at 6th Street Playhouse, From Russia with Love is a high-spirited assemblage of shorts by Anton Chekhov. Anchored by two classics of the short-form comic romance—The Bear and A Marriage Proposal—the show elegantly intertwines, in segments directed by Beulah Vega, the text of real love letters from Chekhov (Adam Palafox) to his wife, Olga (Yelena Segal), adding an unexpected dose of tender, heart-warming emotion.

The Bear, directed by Eyan Dean, gives us a grief-stricken widow (Taylor Diffenderfer) whose self-indulgent mourning period—she promises her alarmed servant, Luka (Kathy Ping Rogers), that she'll never leave her house again—is rudely interrupted by the intrusion of a gruff, blustery businessman (Ryan Severt), who arrives to collect a debt and ends up falling in love—with disastrous and rather funny results, that include a duel by pistols.

In A Marriage Proposal, directed by Palafox, a wildly hypochondriac landowner (Matthew Cadigan) attempts to propose to Natalia (Segal), the daughter of his affable neighbor Stepan (Clark Miller). But before he can manage to propose, he keeps being drawn into petty, escalating arguments with his intended. Feisty, physical and farcical in the extreme, these two laugh-inducing one-acts are delivered in a 90-minute package that might make you rethink everything you believed about Chekhov. Evidently, he was a very funny guy, and he sure had a way with a love letter.

Then there's In Love with the 8 x 10, presented by Lucky Penny Productions in Napa. Eight 10-minute shorts culled from over a hundred submissions from around the country, these unevenly acted but generally outstanding shorts include the twisty tale of two nerds on a very rocky date (which features actual rocks), a pair of Labradors discussing the complex etiquette of dog mating, and a lawyer who brings his fiancée to a shrink to learn small talk and gets a lesson in true love.

Think of it as the stage equivalent of those candy heart sayings—though with a bit more bite beneath all the sugariness.