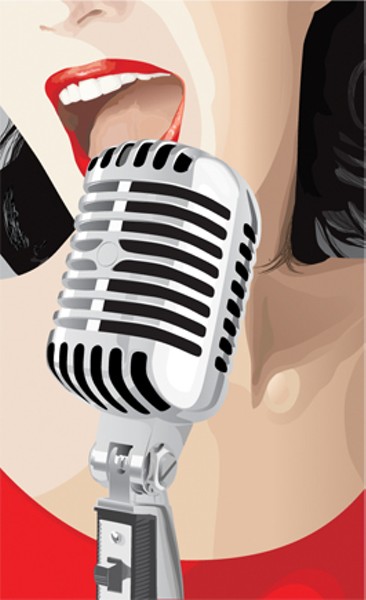 The first time I sang karaoke—or "the empty orchestra," as translated from the Japanese—was in a divey Korean restaurant in Southern California, where a long-lost friend and I laughed our way through a screeching version of "Summer Nights" from the Grease soundtrack. I fell in love with the kitschy performance aspect of karaoke and have been an aficionado ever since. Some people treat me like I have a strange illness when I wax rhapsodic about my love. Others, like the security guard in the Philippines who shot a man when he refused to stop singing a tone-deaf version of Frank Sinatra's "My Way," take the art much more seriously. Wherever you fall in the spectrum, there is a place for you in the booming North Bay karaoke scene.

For a bumping night out, there's nowhere like the strip-mall slice of heaven known as Rita's Restaurant and Lounge (138 Calistoga Road, Santa Rosa;707.537.0308). Fake flaming stage cauldrons? Got it. Dance floor crammed with a joyous crowd of fifty-something, Dockers-clad men, high-heeled bank tellers and Mohawked hipsters? Got it. Like a cross between a college roommate's wedding reception and American Idol, Rita's is all that and a bag of chips.

Soon after I arrive on a Friday night, Rodney, a handsome man in a sharp white shirt and matching shoes, takes the stage to perform a pitch-perfect rendition of a Maroon Five song. The dance floor really gets going when Tim, the Devo-shirted DJ, sings "Night Fever" by the Bee Gees. Rita's features karaoke Thursday&–Saturday at 9pm. It costs $1 to get in and, after 11pm, no slow songs allowed.

The Flamingo Lounge (2777 Fourth St., Santa Rosa; 707.545.8530) is a bona fide karaoke hotspot. Monday, Wednesday or Thursdays at 9pm, the time is right for enjoying the smooth DJ stylings of Bobby D. in a '60s-style lounge setting. At the Flamingo, it's safe to pay tribute to Sinatra even if it is a little off-key.

DJ George Barish offers his traveling stage show "Karaoke with Class" at the Last Day Saloon (120 Fifth St., Santa Rosa; 707.545.2343) on Mondays from 7pm to 11pm. With a computerized song-selection system featuring over 100,000 songs, a fog machine, professional lighting system and Barish's enthusiastic accompaniment on a plastic inflatable guitar during those embarrassing extended guitar solos, this is karaoke for the dedicated.

As my date and I step through the door on a quiet Monday evening, a woman sings the first soft strains of "Stairway to Heaven," a courageous song choice that might bring on boos and impatience at less genteel bars, but here elicits supportive smiles and polite applause. Order up a Red-Headed Professional or a Russian Quaalude at the bar, and settle in for the smooth sounds of Jimmy Buffett and the Rascals at this mellow karaoke night.

AJ, my favorite karaoke DJ in Sonoma County, struts his stuff at the Nutty Irishman (995 Piner Road, Santa Rosa; 707.544.1447) Tuesdays at 9pm. Pull up a chair at the endless bar to watch a mixed crowd perform everything from country hits to rock favorites. AJ is encouraging and friendly, whether your voice sounds like Celine Dion or the gum being scraped off the bottom of a school desk. The first time I nervously performed "Immigrant Song" by Led Zeppelin at the Nutty, AJ told me I'd made a "nice choice." Stay gold, AJ, stay gold.

When I'm craving some singing among life-sized dioramas of stuffed polar bears, Margaritaville-style palapas and Jack Daniels&–sipping skeletons, I look no further than 256 North (formerly Kodiak Jack's, 256 Petaluma Blvd. N., Petaluma; 707.765.576) Thursday&–Saturday from 6pm to 9:30pm. With 80,000 songs to choose from, it took me two beers and a plate of extra-large nachos just to get to the R's in KJ's massive songbook! From "Float On" by Modest Mouse to L'Trimm's "Cars That Go Boom." If it's singable, it's in the book. The local crowd is friendly and welcoming. Owner and karaoke DJ Wayne V says, "This isn't drunk karaoke, we get some of the best singers in the Bay Area."

On Friday nights, performers can depend on the house-provided music or bring in their own CDs to the Windsor Wine Shop (9058 Windsor Road, Windsor; 707.838.9378), where hostess Stephanie offers a night billed as open mic and karaoke. With a big local following, I recommend arriving by 7pm to get a seat. This is a perfect place to sip a glass of wine and do a tasteful version of "Rich Girl" by Hall and Oates.

Larry hosts "Larry-oke" at Smiley's (41 Wharf Road, Bolinas; 415.868.1311) on Wednesday nights at 8pm. The staff says that they get an eclectic group of locals who put on a good show. From top-notch performers to the extra-tipsy folks, this mixed crowd sings everything from fun old rock songs to country and anything in between.