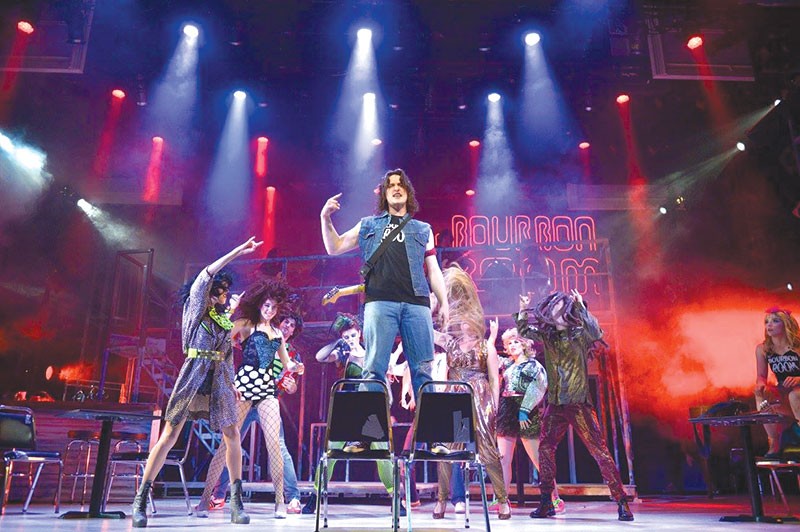 A stage show with music, built backwards. That's one way to define a "jukebox musical." This year's Summer Repertory Theatre Festival at Santa Rosa Junior College, includes two very different examples of the "jukebox musical," in which the story is constructed around a random list of songs, rather than the other way around.

Nice Work If You Can Get It, revolving around classic 1920s and '30s songs by George and Ira Gershwin, is pleasant, classy, solidly performed and light as a feather. Rock of Ages, constructed from pop rock and metal tunes from the garish '80s, is coarse, crude, exuberant and sprinkled with sleazy Sunset Strip darkness and danger.

Created by Chris D'Arienzo, Rock of Ages employs songs by Journey, Van Halen, REO Speedwagon, Pat Benatar, Starship and others in telling the story of Drew (Nate Stuckey), a wannabe rocker stuck cleaning the bar at an L.A. music club, and Sherri (Jessica Merghart), the aspiring actress he falls hard for. Yes, singing Steve Perry's "Oh Sherrie" is inevitable. Both are working at a legendary rock venue called the Bourbon Room when their budding romance is derailed by the arrival of Stacee Jaxx (Mark Jammal), the amoral lead singer of a band called Arsenal.

A subplot involves a scheme by German developers to raze the Bourbon Room to make way for chain stores, galvanizing the club's supporters into various forms of protest, including repeated group performances of Twisted Sister's "We're Not Gonna Take It."

As written, it's a bit of a hot mess, with a fair share of gleefully offensive moments and one potentially moving scene marred by the actors' use of distasteful stereotypes. But overall, Rock of Ages is infectiously pleasurable, with loads of high energy, a kind of gritty, youthful innocence, and tunes written to stick in your brain for days.

Meanwhile, Nice Work If You Can Get It, written by Joe DiPietro, seems to evaporate almost as soon as it's over, along with the majority of its pleasing but strangely unmemorable tunes, the two or three exceptions including "Someone to Watch Over Me," " 'S Wonderful" and "Fascinating Rhythm."

The plot, about a Prohibition–era playboy (a delightful Alex Stewart) falling in love with a sweet bootlegger (Aubrey Reece, also delightful) on the eve of his marriage to a famous dancer (Sophie Madorsky, hilarious), is slight and silly, but crammed with old-fashioned, simplistic charm.