A TOWERING MASS of muscle adorned with skull-shaped shoulder pads and codpiece, silvery dreadlocks whipping in a tangled blur, Ice Thug #7 uses his spiked battery-powered in-line skates as a weapon of momentum to shield the evil Mr. Freeze in the upcoming Batman movie.

Away from reel life, Ice Thug #7 is a whole lot warmer. Santa Rosa skater Azikiwee Anderson wears a T-shirt and overalls, works for virtually no pay at the indoor skate club he helped build, and got close to Arnold "Mr. Freeze" Schwarzenegger just long enough to front-flip over him and note that he's not nearly as big as he looks in the movies.

There's nothing Hollywood about 22-year-old Anderson's athletic talent--or his dreadlocks (which are under a wig in Batman and Robin because they made all the other henchmen's dread wigs look too fake).

His penchant for in-line skating is no stunt, either. After spending a month getting chauffeured by limousine to the airport and flown to Los Angeles for filming, Anderson is back to the world of kids and warehouse grunge, presiding over the county's only indoor park for in-line trick, or aggressive, skaters.

What about the legal skate parks?

HAVEN'T HEARD of an indoor skate park in Santa Rosa? No surprise. Anderson and his partners pointedly kept the project under wraps to avoid the hassles and expense of acquiring city permits.

Bondage Skate Park--named for the ties that bind Anderson to his partners Mike and Loretta Beach, Tim Hassler, and George Scott--maintains a low profile. Located in a nondescript ramshackle building in Santa Rosa, it has no sign, no phone, not even an address to indicate that it's the hangout for a few dozen hardcore skate enthusiasts.

The cement floor is bare, except for carpet remnants that litter the floor in front of the saggy couch. A few banners grace the corrugated steel walls; there's a bulletin board, a small table, a couple of space heaters. The changing room is behind one of the skate ramps.

The skaters couldn't care less about the bare-bones surroundings. What counts are the homemade half pipe, quarter pipes, and spine ramps, along with structures mimicking the ledges, curbs, and stairs of the street. The place is filled with hip-hop music and industrial noise--wheels grinding on metal, bodies slapping against wood.

There's a demand for a place like Bondage, protected from the weather and away from the "crowds and attitudes" at Santa Rosa's public outdoor skate park on Fulton Road, Anderson says.

Some 20 to 30 aggressive skaters and skateboarders, mostly kids, pay $50 a month for membership at Bondage, which barely covers rent and insurance. Anderson is there almost every night, skating, hanging out, making improvements in the facility. The rules are simple, he says: "Wear pads and helmet; no fighting, no bad vibes."

The vibe is important to Anderson. He's one of the kids, with his baggy clothes, peanut butter and jelly sandwiches, and adrenalin-pumping tricks, but he also commands respect.

"The kids listen to him. They don't mess around," says Candace McGuire, who works with Anderson's girlfriend, Sukie Gill, at Community Hospital. "He's friendly and kind, but he's a meticulous, intense teacher. I was [rock] climbing with him, and he wouldn't let me down until I had the move. I was exhausted, but I got it."

Anderson clearly relishes the opportunity to be a mentor and expose people to his "be true to yourself, love what you do or do something else" philosophy of life.

Like most alternative sports, skating has a lingo all its own. The kids at Bondage are fluent in the jargon, which they've dubbed "Skatebonics." A pigger is a fat person, not to be confused with someone who's phat, which is cool. Sick, ill, dope? All good. Stupid? Bad. Goin' grubbin'? Must be hungry. Quads are old-style roller skates. Jacked? Injured.

Obscure vocabulary notwithstanding, most of the young members' parents are delighted to have a local indoor skate park for their kids, although some are a bit jittery about the risks. Several skaters have been injured--a dislocated knee; a few chins requiring stitches; bumps and bruises. Anderson has the longest list of all: two sprained wrists, a twisted ankle, tweaked tendons, neck and hip injuries, and busted lips.

At the moment he's sporting a cast for a broken bone and pulled tendons in his right ankle from slipping off a grind on the half pipe.

"You're gonna fall. That's part of it, in order to learn and be better," Anderson says. "I don't let myself think, 'I can't do it, I'm going to get hurt.' That one second of doubt is what's going to hurt you. How do you know you can't do it? It might be difficult. It might seem impossible, but every time you do it you learn.

"Fear is lack of confidence," he adds. "Every now and then I get jacked because I chicken out halfway."

When Bondage first opened, Anderson kept a tight lid on the existence of Santa Rosa's newest recreational facility. "I didn't want no one saying nothing to nobody. If I didn't know you, I didn't want you here," he says. "We could have had a lot more people here if we'd opened to the public, but I was afraid of getting shut down."

Now Anderson is striving to move his underground facility into the limelight. He's looking for investors and 20,000 square feet of space to build Skate Sanctuary, a public park with more, higher, and bigger of everything, as well as the city's official blessing. 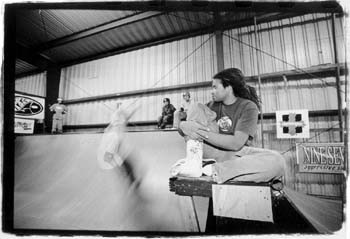 IN MARCH the secret got out about Bondage, at least to the skating community. The park was one of the stops on the national Sunshine Tour. More than 100 pro and amateur skaters packed the facility for a day of skating, food, and sponsor demos. The baggy look was de rigueur, with no one's pant crotch hanging above mid-thigh, and the place buzzed with spectators and with skaters cheering one another on. Anderson was right in there, grinding, turning, catching air with the best of them.

And, at 6-foot-3, 220 pounds, he stood out from the mostly scrawny short-stuff crowd.

While his size is an asset in most sports, it's a handicap in skating. "When I go six feet in the air and come down on my knee, that's a lot of weight. Littler guys bounce when they fall; I put holes in things," he says.

Anderson, a vegetarian and self-styled graffiti artist, started skating two years ago while teaching gymnastics in Rohnert Park. A couple of adult students wanted to learn how to do flips so they could try it on in-line skates. Sounded like a great idea to Anderson, who quickly added aggressive skating to his athletic repertoire, which includes football, wrestling, boxing, hockey, track and field, diving, rock climbing, gymnastics, and jiujitsu. Soon he had sponsors attracted to his "anything is possible" attitude and hip earthy image.

Anderson gets flown all over the county by his sponsors for photo shoots and to judge aggressive-skating competitions, which are becoming an increasingly big business. He was flown to Rhode Island in April to try out for the X-Games, the Olympics of extreme sports, but didn't make the cut.

"I skate better when I'm not competing, because I'm doing it for the right reasons, not sponsorship or money," he says.

"On your first birthday they give you your name, so your name is who you are and who you become," says Anderson, who was born in New Orleans and raised in San Francisco and Chico by his single mom. "Your name has a lot of power over you. Every time your name rings, it reinforces who you are. If you have a name that means brick loader, maybe that's who you'll become."

Anderson has big dreams for Skate Sanctuary. A mild dyslexic with attention deficit disorder, kicked out of school for a year at age 14, Anderson wants the skate park to be the community center that he never had. His first plan is to implement a Homework Exchange, an incentive program for at-risk youth.

"We'll have tutors who can help with homework. Kids bring their homework up completed and they get to skate for free," he says.

Anderson is writing a business prospectus, with aspirations of raising $70,000 to $100,000 to open the facility. While his plans may sound ambitious, and a little naive for a 22-year-old with no business experience, Anderson doesn't seem to notice stumbling blocks.

"Things always work out for Azikiwee," says Gill, his girlfriend. "He does good things, and that brings good things his way."