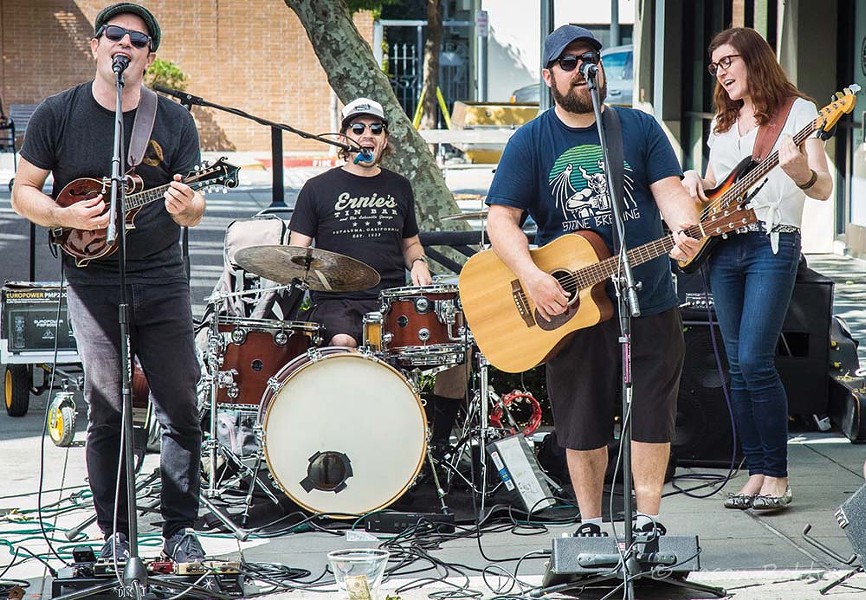 Drawing from his Irish heritage and punk upbringing, Sonoma native and multi-instrumentalist Tony Gibson feels right at home when he's fronting folk-rock revivalists the Gentlemen Soldiers on stages and at festivals throughout the Bay Area.

"We're a fun band, we really enjoy performing for people, but we also enjoy each other onstage," says Gibson.

The band's been an Irish-music institution for nearly a decade, and now they're sizing up a proper debut album—slated for release later this year—and making July feel like March when they perform in Novato on July 26 and in Petaluma on July 27.

Gibson, who moved back to the North Bay after working in the Southern California music business in the early 2000s, started the band in 2011 with high school friends and musicians Marcos Garcia (guitar and vocals) and JB Duff (drums and vocals) as a way to celebrate Saint Patrick's Day at Murphy's Irish Pub in Sonoma.

"We decided we wanted to put a sort of Pogues-ish band together," Gibson says. "We spent the first three years grinding through the Sonoma music venues. Eventually, we took a direction forward to playing throughout the Bay Area."

The group recruited bassist Emily Froberg a few years back and plays a mix of traditional and modern Irish songs and other folk tunes with an upbeat rhythm and acoustic instrumentation accompanied by stirring harmonies. While this sound made them a mainstay on North Bay stages for eight years, they weren't able to commit to a recording until now.

Furthermore, Gibson is looking ahead musically and plans to write more original material and fill out the band's live sound. Having learned mandolin in addition to guitar, he's now practicing Irish Bouzouki, which lies somewhere between the two instruments.

"We've got a little bit of everything," Gibson says, of the music. "It's rowdy, but it's playful. It's a good time; and in times like these, it's good to seek out good times."