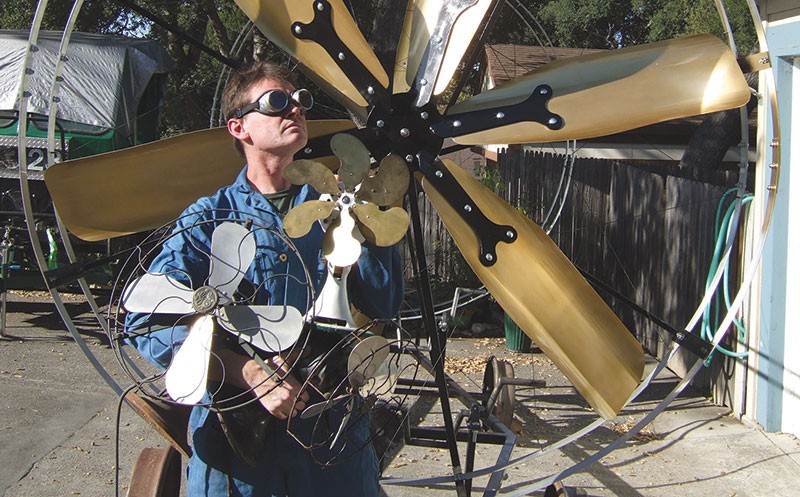 Andy Graham is funneling small plastic particles into a homemade injection mold when I greet him at his Santa Rosa shop.

The particles are heated and put under thousands of pounds of pressure to form the end pieces of his original percussive instrument, the SlapStick.

The injection mold is one of several custom-made machines that Graham developed in his shop to craft his patented hybrid instrument. The SlapStick is made of a high-tension metal band strapped on an aluminum body and amplified by an electric pickup. By hammering on the strap with fingers or a drum stick, the musician can produce sounds like a slapped bass guitar, combining melodic and percussive elements.

"The only way to make money manufacturing by yourself is to make your own machinery," Graham says. "I put all the work into this," he adds, showing off his metal cutting and drilling tools.

By designing his own machines, Graham is able to produce the six-foot-tall SlapStick and the popular two-foot-long SlapStick N-100, also known as the Noodle, with precision accuracy in a timely fashion. Whereas traditional luthiers can spend several weeks on one instrument, Graham by can produce 50 instruments a week.

Growing up, Graham played drums in various bands and worked as a toolmaker. He says it came together when he starting building his own custom instruments.

One of Graham's first musical inventions was a mounting rack for didgeridoo that he could use while also playing drums. From there, his creations became more elaborate, such as the electric stringed didgeridoo he built from a staircase hand railing.

The SlapStick was conceived 15 years ago, when Graham happened to smack a metal cable that was tightened around a shipping container. The resonating hum stuck with him, and the next day he brought an electric guitar pickup to the container to see how he could capture that sound.

"It's just one of those funny things," he says. "That's how a lot of my ideas come to me; I'll just see something in a scrap yard or a crate, and I visualize something and start hacking away at it."

As owner and machinist of Slaperoo Percussion, Graham is a fixture at events like Maker Faire and the annual National Association of Music Merchants trade shows. Stevie Wonder has played Graham's inventions, as does bassist Doug Wimbish (Living Colour) and Hammond B3 legend Dr. Lonnie Smith, who had Graham make his SlapStick into a usable walking cane.

As a solo performer, Graham incorporates his inventions into a neo-world music exploration that has made him a staple at events like the North Bay Cabaret in Santa Rosa.

"This is wanted I've always wanted to do, be an inventor and play music," Graham says.