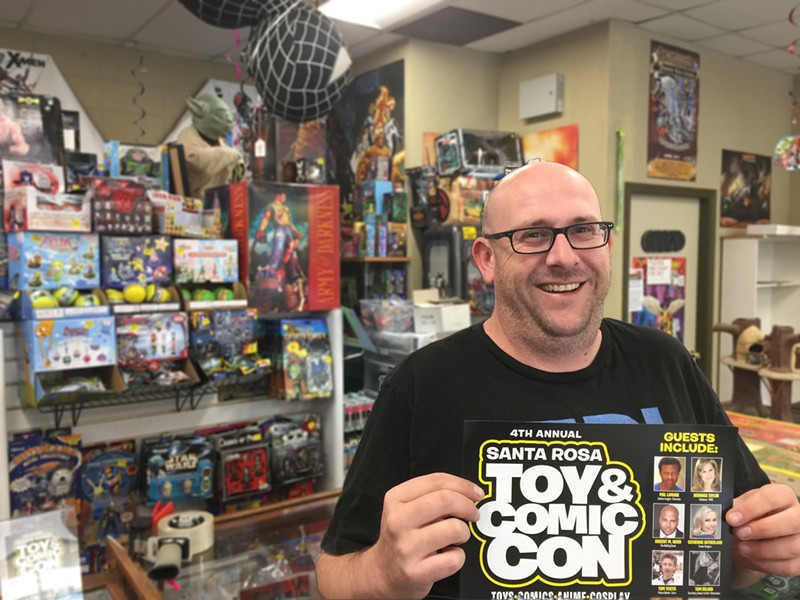 There’s an entertainment trope wherein an embittered geek contrives an occasion to show his oppressors A) who’s boss, B) who’s an evil super-genius, C) who has the most toys. Though not an exact fit for Mike Holbrook, creator of the annual fan fest Santa Rosa Toy Con and Comic Con, two outta three ain’t bad.

“It started out as bitterness,” says Holbrook, who founded his convention after failing to get tickets to the annual juggernaut known as San Diego’s Comic-Con for the third consecutive year. “Then it turned into a passion.” In 2012, Holbrook, a lifelong toy collector-turned- dealer, sold off portions of his own collection to finance his first convention at Sonoma County Fairgrounds’ Grace Pavillion. It found immediate resonance with North Bay conventioneers who rallied behind an event that boldy went where no convention had gone before – namely their hometown.

Holbrook doesn’t consider Toy Con a competitor to other conventions on the circuit – it’s more of a complement to a growing ecosystem of fan-friendly enterprises that celebrate all manner of superhero, sci-fi, manga, and the infinite other evolutions of geek culture. Holbrook is eager to shout out Lumacon, a non-profit educational event created by the librarians at the Petaluma Joint Union High School District and the Sonoma County Library, which will convene for the third time next January.

“It’s great local convention, too,” he says. “Fortunately, I’ve been selling at other conventions as a dealer for years so I already know all the promoters and we all talk to each other to make sure our dates don’t step on each other’s toes. We all sell at each other’s shows – we all work together, it’s just a big community.”

In the four years since Holbrook launched Toy Con, he says dozens of new conventions have taken root over the nation. “And every one of them is welcomed by their community and loved by everyone who goes. It might just be a fad, it might die-off but I hope it doesn’t because I want to keep going with it.”

The convention community goes beyond dealers, collectors and fans. It also includes independent and local artists. When the geeks inherited the earth (if you don’t believe this has happened, visit your local multiplex), their close cousins, the arty types, seemed to have been sidelined. Toy Con, with its emphasis on local indie producers, advocates for a geek-artist hybrid. It's like The X-Men Academy got an Art Department.

“Oftentimes people are discovering my work for the first time so being able to exhibit at comic-cons like this one are great chance to connect directly with new readers and create new fans,” says Alexis E. Fajardo, creator of the Kid Beowulf comic series. “It's even better when the comic-con is in our own backyard!”

“For a lot of (artists), it’s the best way to promote their stuff. Some have goals to be picked up by Marvel or DC,” Holbrook says referring to the present titans of comics publishing. “But some want to remain how they are and the best way to get their name and their books out there is to regularly do this kind of stuff. Being the only convention up here, they all want to attend because it’s a whole market they haven’t touched yet.”

The artists will join a throng that amounts to three buildings of comics, toys and games spread over 200 vendor tables. Other on-premise activities include LARPing (live action role playing with foam swords), a mini disc-golf course, live wrestling, a video game tournament room, the obligatory cosplay and Q&As and signings with celebrity guests.

Among the marquee names making appearances this year are Veronica Taylor who voiced Ash Ketchum in the Pokémon anime for its first eight seasons, Vincent M. Ward of TV’s The Walking Dead fame, Phil Lamar who voiced characters in animated series Justice League and Futurama, and Catherine Sutherland, known to fans for her portrayal of the “second Pink Power Ranger” in the Power Rangers TV series. Dozens of other guests familiar to fandoms far and wide will also attend (including those unfamiliar to fandoms like the author of this article).

“I try to aim for the fan-friendly guests, the guests that are going to shake your hand and smile not the one ones who are ‘Ugh, my career is down to conventions,’” says Holbrook, who hopes to eventually bag the grandsire of comics himself, Marvel-founder Stan Lee.

“I’d like it to snowball into something big so I can afford a Stan Lee or a current big name but right now I can’t,” says Holbrook, who adds that personalities of Lee’s stature often require appearance fees in the tens of thousands of dollars. “I understand – they’re in such demand that if they didn’t put that price there they would be at some podunk thing every weekend, signing stuff until their fingers bleed.”

Bloody fingers aside, Holbrook anticipates a good turn out (in recent years it’s been thousands). “You have people who come for just the toys, or for the art and the guests and you have people who have never been to one before and want to check it out,” says Holbrook. “My goal, with my event, is to make everyone single one of those people leave with a smile on their face.”