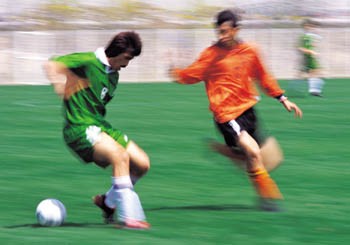 Whiz-bang!: Wait, you say to yourself, that's not a picture of Heather Irwin in her soccer-mom getup. Like she's going to let us photograph her in that . . .

Most Likely to Fall Down

The wretched confessions of a middle-aged soccer mom

'Wow, you have the whitest legs I've ever seen," says my teammate, pointing to the blue-white stalks that jut downward from my ill-fitting soccer shorts. "Uh, my dermatologist appreciates them," I think, not knowing exactly how to respond. My poor appendages haven't seen the light of day since 1978--the last time I played soccer. Tweeeeeet! goes the whistle. Game on.

Let me just say that I hate wearing shorts. I hate sports and I hate anything to do with sweating or butt-patting or water bottles or body parts that scream in pain the next morning. In high school, I was voted Most Likely to Never Get Jock Itch. Oh my God, what am I doing on this field?

I'll explain: Last summer, in one of my more impulsive moods, I joined a co-ed indoor soccer team. I have no idea why, because I am the least active person I know and my experience kicking a ball around the field is limited to what I learned in third grade--and even then I sucked.

All I can figure is that my rash decision to be on an over-30 co-ed soccer team had something to do with the fact that in every other aspect of my life, I'd become--duhn-duhn-duuuhn!--a soccer mom. Without a minivan, I will add in my defense.

My kid plays on a competitive soccer team in Santa Rosa. For me, this entails sitting in a lawn chair four or five days a week, shouting "Offsides!" or "Good save!" for hours on end as eight-year-olds sprint around the field clobbering each other. My two-year-old is about to start soccer as well, wanting to follow in her big brother's footsteps even though walking is still a bit touch-and-go at her age.

The Boy also joined the soccer frenzy in a fit of midlife fitness last spring, signing on as--get this--a goalie, the most brutal of all positions. Sitting on the bleachers, the kids and I spent most of the spring hooting and hollering at him through the plexiglass: "Good save!" or "Behind you!" or averting our eyes when he had an overly ambitious moment and fell on his ass. We love him anyway.

It's a brutal game, soccer. Had I known how many humiliating moments were awaiting me, I probably would have walked away from the whole thing. But turning 35 does funny things to a person. It makes you think that after years of inactivity, your fat ass can walk out onto a soccer field and actually kick a ball, or . . . run.

I can attest to the fact that no such thing is likely to happen.

Recreational soccer among the parent set has become the new tennis, or racquetball, depending on what era you grew up in. Partly social, partly recreational, partly athletic, it's a sport that most of us remember from childhood. There are no complicated rules (kick the ball!); suiting up requires little more than a pair of shorts, some knee-high socks, tennis shoes and shin guards; and frankly, it's a lot more continental than, say, softball. It puts a new spin on the whole soccer-mom thing.

In Cotati, where I play, there are no less than nine over-30 teams just in our division, that being the hilariously underwhelming "beginner" division. There are similar numbers in the over 25, over 35, over 40 divisions that range from beginner to competitive. In addition, there are all men's, all women's and co-ed teams--though word is that the co-ed teams have more fun. I can attest to the fact that body-slamming a six-foot guy (I know I'm not supposed to, but I get excited) is a very good bit of fun.

On Friday and Saturday nights, when most of us play, the sports center is bustling from early evening until late into the night--sometimes to 11pm or later--with teams milling around the field, watching games and socializing, often with kids in tow. Hey, what else are we going to be doing? Watching a movie on the sofa?

The one thing that everyone tells you about playing soccer at our age is: don't get yourself hurt. But play long enough and you're destined to have something blow out--and the nastier it is, the more credibility you get as a player. On our team, the Boy and I are in the minority of people not wearing some sort of brace or wrap on their knees. (We, of course, have only been playing a few months, which is the only logical explanation for this.) In fact, knee injuries are the most common sports injury in soccer, what with all that kicking and swerving, not to mention all the falling down.

And there is much falling down to be done, most of it with as little grace as possible. One learns very quickly and with much pain that an effort to catch yourself or land on anything besides your fat tushie will injure not only knees and wrists, but also your ego. After trying once to catch myself from falling, landing in an extreme squat position and watching both my thigh muscles snap and my knees crack in horror at this unlikely posture, I now go down like a two-year-old, straight on to my booty, and with a little roll. I'm back up in, you know, no time.

All of this brings me to the other thing that I've never once done in my life. Aside from fleeing in terror from a mugger (I think I came pretty damn close to a four-minute mile), I have never once run anywhere, for any reason, in my life. However, playing soccer does require one to run. You see my conundrum here.

Being human, I sort of figured this running thing would just come naturally to me--like childbirth or burping. Engage the brain to run and the body will move feet, etcetera. I can attest to the fact that this is also something that may not happen, depending on your age and physical status.

During my first game (and I am not making this up) the moment came when a large, and I mean very large, woman was running toward me with the ball and, like any normal person, I decided that now would be a good time to run. I hadn't worked out whether it was toward her or away from her, but the general order was there: run!

For about a millisecond, my body thought this was a very funny joke. It completely froze up and, as the top part of my body leaned into what I thought would be a full-on sprint, the bottom portion remained completely still. Needless to say, instead of running, I became a speed bump on the ground, slowing the VLW down for a tiny moment until she dribbled around me. This would be one of the aforementioned embarrassing/humiliating moments. Since then, I've practiced this whole running thing once or twice, and my body seems to be acclimating well, though it does threaten to go back to being a speed bump from time to time.

Oddly enough, my team is pretty good, no thanks to me. This season, we're in third place, again, no thanks to me. I've only let the ball roll past me and into the goal once, maybe twice. I've fallen on my face several times, gotten kicked in the gut once and so far haven't blown out any of my appendages. With the darling Boy behind me in the goal, telling me exactly what to do (mostly, "Kick the ball, Heather!") and my son in the penalty box telling me what to do (mostly, "Kick the ball, Mom!") and with the support of my loving team (mostly, "Hey, you! Kick the ball and don't miss it this time!"), I've decided that despite all the humiliation, I'm gonna keep on playing. And falling down.

And loving every minute of it.

From the November 30-December 6, 2005 issue of the North Bay Bohemian.