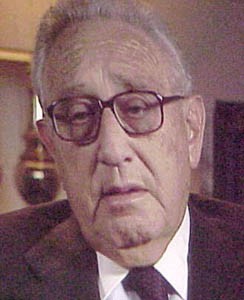 Face the Nation: Henry Kissinger: inspiration for some angry music.

Kissinger, the A-bomb, and me

The ghosts of Christmas past paid a visit recently. Henry Kissinger, the former secretary of state under the Nixon and Ford administrations, resigned last week from the 9-11 commission--that ill-fated investigative body that is supposed to hold an independent inquiry into U.S. intelligence blunders leading up the 2001 terrorist attacks in New York, Pennsylvania, and Washington, D.C.

Potential conflicts of interest, Kissinger said, but critics knew otherwise. For the reemergence of Kissinger had revived the specter of one of the darkest chapters in U.S. history: the 1972 Christmas bombing of Hanoi, North Vietnam. At the time, Kissinger persuaded President Nixon to commit one of the most horrific acts of an astonishingly immoral war--a lengthy and particularly brutal bombing campaign that flattened the Bach Mai Hospital, killed 2,000 civilians, and maimed countless others.

The incident made Kissinger a hated figure and a target for satirical barbs. It also earned him a lampooning in songs by such diverse acts as Monty Python ("Henry Kissinger / How I'm missing yer / You're the doctor of my dreams / With your crinkly hair and your glassy stare / and your Machiavellian schemes") and the punk band Twisted Nixon, which once penned a song called "Kissinger Is Dead."

Thirty years later, the grim events of America's immoral actions during the Vietnam War continue to haunt us. Yet they were just a part of a creeping malaise that seemed to infect the country in the early to mid '60s. You can hear a snippet of that disturbing turn on the song "Seven O'Clock News/Silent Night," the performance piece that concludes Simon and Garfunkel's breakthrough 1966 album Parsley, Sage, Rosemary, and Thyme, included in the newly remastered five-CD box set, Simon & Garfunkel: The Columbia Studio Recordings 1964-1970 (Sony/Legacy).

The chilling song finds Garfunkel lending his angelic choir-boy voice to the classic Christmas carol as a radio broadcast trumpets reports about the escalating war in Vietnam, the disturbing arrest of serial killer Richard Speck, and the rising tide of street violence and injustice. The song serves as a matching bookend for filmmaker and activist Michael Moore's new documentary Bowling for Columbine, an examination of America's obsession with guns.

Soon, the horror of those high school shootings may seem almost quaint. After all, here we sit with our collective fingers on the trigger, itching for a fight with Saddam Hussein, and faced with the appearance of an even graver apparition: the use of our vast nuclear arsenal on the Iraqi battlefield.

Suffice it to say, it's not easy to find relevant holiday music this year, though there is an abundance of escapist confection. Last week I even heard a Muzak version of John Lennon's touching antiwar song "Happy Xmas/War is Over" chiming over the sound system at a neighborhood supermarket --sort of the aisle five version of seeing a Grateful Dead sticker on a Cadillac.

Yet there are those in the music community willing to explore America's infatuation with things that go boom in the night. While Kissinger was climbing back under that slimy rock from which he emerged last week, the San Francisco Symphony announced that it has commissioned classical composer John Adams to write an opera based on the creation of the atomic bomb.

Adams, America's foremost contemporary classical composer, often works in seclusion at his Sonoma County ranch. He says the opera will focus on troubled genius Robert Oppenheimer, the remorseful father of the A-bomb and will be called Dr. Atomic, a title inspired by 1950s sci-fi movies.

Adams knows a thing or two about America's ghosts. He is the composer of the critically acclaimed 1987 opera Nixon in China --in which Kissinger plays a key role--and most recently was commissioned by the New York Philharmonic to fashion a remembrance to the victims of the 9-11 attacks. His On the Transmigration of Souls incorporated text from missing-person posters and cell phone calls received as the tragedies unfolded.

So how do we express our hopes and ambitions for peace through song during this turbulent holiday season? I find myself listening to Jackson Browne's defiant un-Christmas song "Rebel Jesus" and Bruce Cockburn's 1991 CD Nothing But a Burning Light (Columbia), with its oddly comforting mix of born-again Christian sentiments, leftist radicalism, and reaffirmations of life and love.

How about you? What's getting you through this dark night of the American soul?