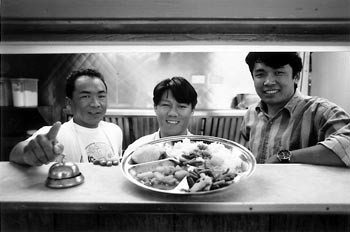 WE HAVE TO ADMIT that we thought it was a gag when a reader wrote several weeks ago to inform us about a new Himalayan Sherpa restaurant in Glen Ellen. But when we discovered that a second restaurant featuring Nepalese food from the same highlands region (between China and India) had opened in Santa Rosa, we got serious. While perhaps not on par with trekking to base camp on Mt. Everest, exploring these new ethnic eateries was definitely on our itinerary.

First we journeyed to the Kathmandu Kitchen--a Nepalese and Indian restaurant that opened in October in Santa Rosa's former Taj Mahal spot. Not much has changed decor-wise: There are still white walls with decorated archways, and the harsh overhead lighting is still disconcerting.

Since the servers speak very little English, it was difficult to get any help with questions about the extensive menu, which features some 70 items. (During a second visit, the owner's son, who usually works at the family's other Kathmandu Kitchen restaurant in Davis, was much more helpful. It's a pity he doesn't work in the Santa Rosa location regularly.)

The wines are simply listed by varietal--"cabernet," "Gewürtztraminer," etc.--and are all priced at $14 a bottle, $4.50-$5 a glass. When we asked a server for more information on the wines, he muttered something about "Sutter Home" and ambled off. We finally ordered Indian Taj Mahal beer ($5.25), which has a sharp and fruity flavor, and cinnamon-infused Himalayan tea ($1.50). Unaided, we selected some items and prepared for an exotic feast.

For starters, we tried the jingha til-tinka ($5.95), deep-fried, spicy-flavored prawns coated with sesame seeds and yogurt. Though slightly tinged with hints of mace and cardamom, the dish was still strangely bland and needed a good dose of the accompanying tamarind sauce to wake it up.

The alu tiki ($2.50) are oily, deep-fried potato patties on a bed of iceberg lettuce with a side of mango chutney. Although the menu promises a dish made with ginger, garlic, onion, and roasted cumin powder, these heavy patties were in dire need of more seasoning.

The entrées came with a dal lentil soup that was a little thin and needed salt and pepper. To sop up the curries, we also tried the garlic and cilantro nan ($2), a leavened, pillowy bread with a good flavor.

According to the menu, the mismas tarkari ($8.50) are "seasonal fresh vegetables cooked in the Nepalese style," but these veggies--which included carrots, green pepper, potatoes, and sweet corn kernels--were so flavorless and so uniformly diced that it was hard to believe that they weren't poured directly from a bag of frozen vegetable medley.

An interesting version of chicken tikka masala ($10.95) included pieces of charcoal-roasted boneless chicken cooked with the cardamomlike spice fenugreek and was given a dash of brandy. The rich orange-hued sauce had a good, velvety texture and the chicken was tender, but the flavor combo became starchy and cloying. The chicken tandoori ($10.50), served sizzling atop a bed of onions and fresh cilantro, was a far superior dish.

The best entrée we tried was the beigan bharta ($8.50), an eggplant purée roasted in a clay pot with tasty scallions, garlic, bell pepper, and spices. The dish was slightly sweet, with a pleasing smoky tang that went well with the plain basmati rice.

We declined the Himalayan ice cream ($2.95) and ordered kheer ($2.75), a cool and creamy rice pudding with slivered almonds and sultanas. However, the servers were so slow to clear the table that they did not remove most plates or clean the table before plunking down our dessert on a surface strewn with food debris, half-eaten entrées, and various plates. It was a fitting end to a disappointing experience.

OUR NEXT EXCURSION was to Himalayan Sherpa Cuisine, a small, no-frills eatery on the outskirts of Glen Ellen. The restaurant has a warm decor featuring colorful rugs and posters of the Himalaya Mountains on the walls. There's also a Tibetan altar and a prayer rug. A tape of haunting, bell-like Himalayan bowls music--which is used for meditation--played softly.

The menu selection is fairly small, mostly featuring curries, rice, and noodle dishes. The dal soup, which accompanied the entrées, was thick and rich with lentils--a satisfying, hearty winter broth with a pleasant chalky texture.

We ordered a bottle of Markham sauvignon blanc ($14) from the modest but varied wine list. It tasted surprisingly soft and mellow for a sauvignon blanc but was a perfect quaffing wine to accompany the intricate food flavors that followed.

Fried mono ($4), eight deep-fried Tibetan dumplings stuffed with either beef or vegetables, were served with sesame-based sauce. They looked like little parcels wrapped in pastry and had a delicious spicy cabbage filling, reminiscent of a Chinese spring roll. As the British say: very more-ish.

Tibetan fries ($3) sound exotic, but are simply golden, bite-size potato wedges served with a tasty chili-tomato dipping sauce. We enjoyed their non-greasy crispness. The pakoura ($4)--potato and vegetable fritters dipped in garbanzo bean batter, fried, and served with sesame sauce--was another winning appetizer. Our curry-based entrées included bangoor ($8), tender pieces of pork cooked with onion, ginger, and Himalayan spices. The star here was coriander, which paired wonderfully with the meat.

The vegetable curry ($7.50) was a taste treat in which individual flavors of vegetables--such as cauliflower and potato enveloped in a mild curry sauce--came through as fresh-tasting, and not overcooked.

Masu tarkari ($8.25) is a savory stew of chicken pieces cooked in fresh garlic, ginger, tomato, and onion sauce. The chicken was succulent and the highly seasoned sauce was bursting with flavor. Fluffy basmati rice, a flatter, crisper version of nan bread ($2), and a silver bowl of extra-spicy sauce made good sidekicks.

For dessert, we tried the gulab juman ($2.50)--deep-fried milk and cheese balls in a light honey and rosewater syrup. Sometimes this exotic dish has a wet-flannel texture, but this version was deftly made and just right. The kheer rice dessert ($2.50), served plain, was rich and creamy.

Our server, a member of the family that owns the restaurant, was extremely friendly and accommodating throughout the meal. At one point, he pulled out a Tibetan drum and pounded out an accompaniment to an impromptu chorus by fellow diners, who broke out in a rhythmic Tibetan folk song. As we left, he even offered to tape us a copy of that wonderful Himalayan bowls music.