Ridley Scott's adaptation of 'Martian' is epic and funny 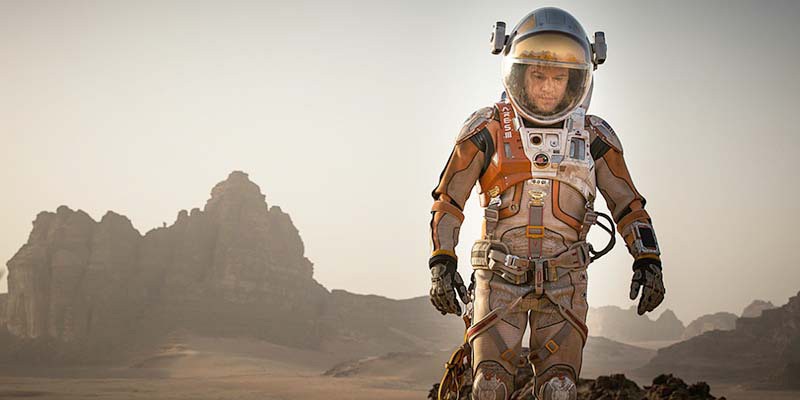 Epic and oddly playful, Ridley Scott's adaptation of Mountain View author Andy Weir's bestseller The Martian combines the vastness of space with the intimacy of a podcast.

Speared by flotsam during a Martian windstorm, astronaut Mark Watney (Matt Damon) is presumed dead by his fellow crew members and left behind. This Robinson Crusoe on Mars is left to ingeniously kluge together a farm with duct tape and tarps, literally dig up energy sources and cook up a communication system to get in touch with home.

Back on earth, Watney's marooning is a public-relations mess. The cantankerous NASA chief (Jeff Daniels) seeks spin-control. His head of PR is a worried Kristen Wiig. Meanwhile, a group of rebels within the organization, led by the mission controller (Chiwetel Ejiofor), concoct a plan to extract the astronaut. Their number includes a geeky punkette (Mackenzie Davis), a half-cracked student (Donald Glover) and an indomitable scientist (Sean Bean).

You don't expect an adventure like this to be funny. Scott is usually a brooder, and when he goes comedic, as in A Good Year, he can be leaden. Yet screenwriter Drew Goddard (Cabin in the Woods) keeps the tone light and free of the philosophical blather that bloated Scott's Prometheus. The music of David Bowie, from his spaceman period, also helps lighten the tone, and is a good complement to the retro-electronic score by Harry Gregson-Williams.

The role of Watney brings out all of Damon's best features: his solitude, strength and hard-bitten humor. His how-to videos and addresses to the camera have the fun of a good reality show. The endgame gets a little predictable, despite Jessica Chastain's grace as the commander of the spaceship that left Watney behind. The Martian is a real pleasure and quite unique—a spirited, sweet-tempered movie about survival.

'The Martian' is now playing in wide release in the North Bay.