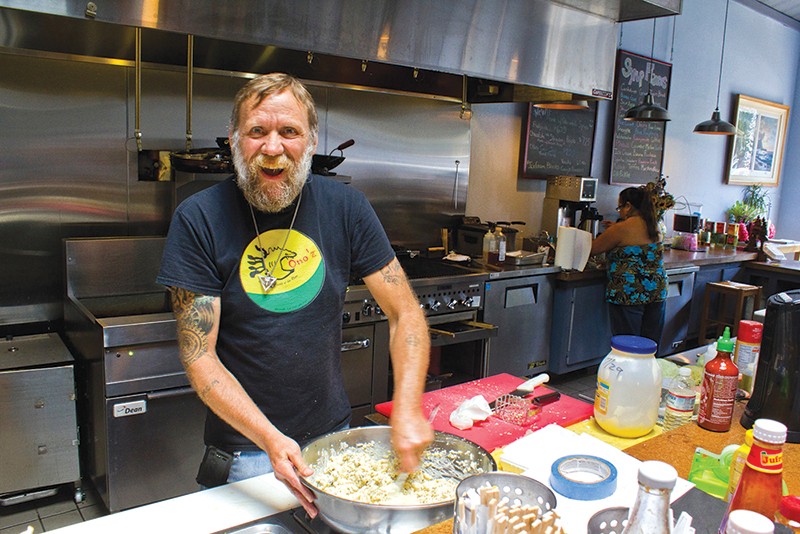 Jocelyn Nelson's blood may run Filipino, Chinese and Spanish, but make no mistake: she is Hawaiian, born and bred. Growing up in Honolulu, she helped her mother in the family okazuya, a Japanese delicatessen that serves ready-made food. Tired of cleaning steam tables, she became a salesgirl when she turned 16, vowing never again to work with food.

"My mom is in heaven, cracking up laughing," Nelson tells me over the phone recently. Chatty and forthcoming, Nelson first came to Sonoma County thanks to Tim, "a third-generation river rat" who grew up in San Francisco and spent his summers on his grandmother's walnut farm in Forestville.

For the Nelsons, life's twists and turns are often filled with fateful significance. Had Tim's speech course not been canceled, he might never have landed in Jocelyn's drama class at Kap'iolani Community College in Honolulu, where the two met in the '70s. Their decision to leave Hawaii was fueled in part by rock fever, and in part because they were spooked after two unrelated murders left them grieving the death of a close friend and having witnessed a brutal road-rage shooting.

And the decision to open a restaurant? "I had all this Hawaiian artwork and nowhere to put it!" Nelson says, laughing. A few other signs pointed the way: they'd sold their construction business, left San Francisco for Guerneville and were itching to start something new.

Tired of "driving half an hour to get some decent fast food," they opened a place similar to the delicatessen of Jocelyn's childhood, where much of the food is prepared in advance. There are no plates; food is served "local island" style, in biodegradable to-go containers meant to be enjoyed at the beach or the river.

The menu reflects Hawaii's cultural melting pot of bold Pacific Rim flavors. The barbecue pork, served Filipino-style, is marinated in white vinegar, garlic and sugar, and offset with spicy pickled peppers. The Chicken Dad's Way barbecue, meanwhile, enjoys a marinade of French dressing and white wine, and a garnish of mango relish. Both are served with rice and salad (either the light spring mix with lime vinaigrette or a creamy olive-and-celery-flecked macaroni) for just 10 bucks.

For a taste of Japan, there's the cold and crispy ramen noodle salad with mandarin oranges and green onions in a rice wine vinaigrette ($8), and Korea is represented by its fermented favorite, kimchi, which joins Spam in a delightful spicy fried rice ($10).

"Spam is our steak," says Nelson, explaining that the canned ham "never went away" after it was popularized on the island during the lean years of World War II. "We have jalapeno-flavored Spam, garlic Spam, hot and spicy Spam. We have definitely raised the bar with Spam."

Perhaps the most iconic menu item, however, is the Hawaiian shaved ice ($4.50–$6.50), which comes in a dizzying array of flavors, including guava, lychee, papaya, coffee and even dill pickle.

Thirty years after leaving Oahu, Nelson still misses the place she will always call home. "Cooking keeps me connected to Hawaii," she tells me. "In Hawaii, when you're happy, you're eating. And when you're sad—you're eating."