Marigold hits more than it misses 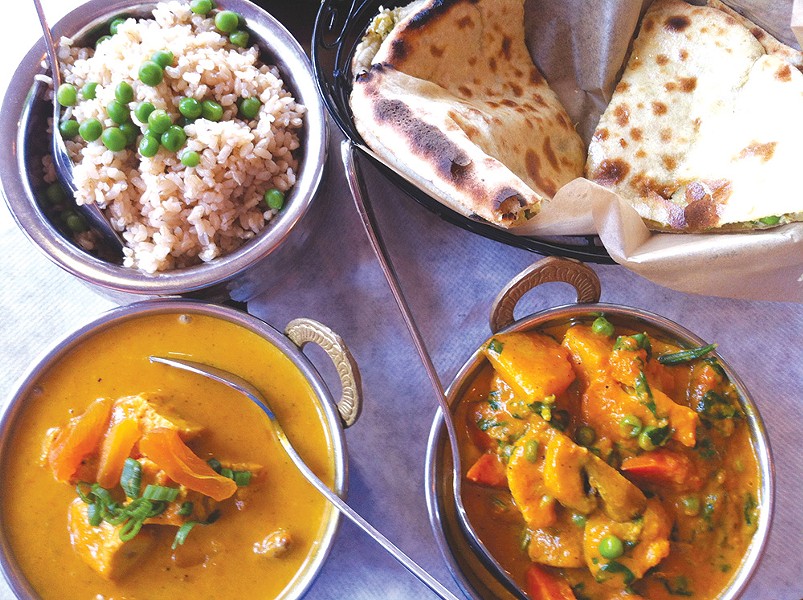 Yelp reviews are, for the most part, a helpful tool. Sometimes they can save you from a bad decision; other times, they can help you discover a gem. But when reviews are mixed, you find yourself on your own, cursing your stars—or, more accurately, those damn three and a half stars.

The residents of Sebastopol gave their new Indian bistro Marigold precisely that. But what does it mean, exactly? A little over a month after Marigold's opening, it was time to find out.

Marigold, located on a busy culinary stretch, is one of those modern, minimalistic Indian restaurants that has only muted music and a couple of painting to signify its ethnicity. A smiling waiter informed us about the special, tandoori rack of lamb, and added that the restaurant is in a trial-and-error period of sorts. Especially popular daily specials will eventually be added to the menu, while less favorable dishes may get the boot, which gave the whole dinner a fun "is it a keeper or not" angle.

The samosa chat appetizer ($5.99) would definitely be staying on the menu. Layers of papadum wafers, chickpeas, potatoes, yogurt and chutney were gone in an instant and left us craving more. The artichoke kulcha ($3.99)— fluffy, naan-like dough stuffed with an artichoke spread—seemed timid and a little forgettable at first, but it grew on us the way artichoke-based things do: quietly and persistently.

Sipping pleasantly spiced chai masala, we moved to the main program. As Marigold is, according to its website, a restaurant that "infuses traditional Indian food with modern and creative cooking," the staff will ask you about your tolerance for spiciness. I always thought there was something apologetic about this practice. Why not go ahead and spice the dish according to the chef's vision or, better yet, according to tradition?

Not that it mattered. The lamb special ($20) was absolutely perfect and couldn't possibly be ruined by a cowardly "medium" spice choice. The rack, deconstructed for more comfortable eating, was coated in crunchy spices and arrived smoking theatrically. Hitting the right balance between juicy and meaty, the dish was a standout headed straight for the regular menu.

Alas, the same couldn't be said of the vegetarian tikka masala ($13.99), which lacked flavor and flair. But Marigold was back on track with the inventive chicken apricot ($14.99). It was very good and indeed unlike anything I have ever eaten at an Indian restaurant. Mildly sweet, with an exotic fruity zing along with flavors of curry and coconnut, it was served with brown rice and proved to be another winner. We finished with a non-Indian yet worthwhile dessert: a luscious chocolate mousse topped with raspberry sauce ($3.49).

After trying Marigold, the mixed reviews are easier to understand. The best dishes are the daring and unexpected ones, while the classics may disappoint. But if Marigold plays its cards smartly, and refines the menu as promised, it may very well become a local staple and even— forgive the Yelp pun—a star in its own right.