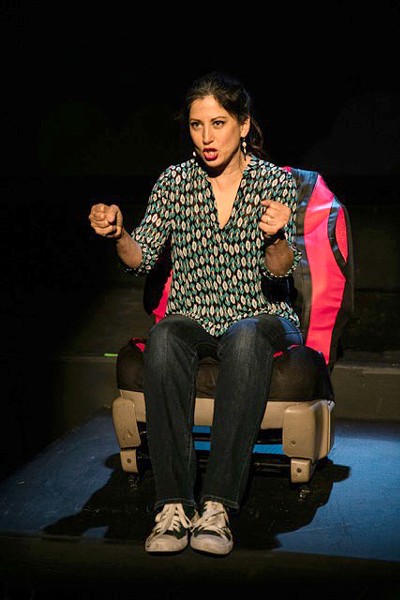 If variety is the spice of life, then Sonoma County theater lovers are facing one spicy smorgasbord of wildly different plays.

6th Street Playhouse presents a rare revival of the 1968 musical George M! featuring the sensational singing and dancing of Joseph Favalora as mercurial Broadway legend George M. Cohan, with a strong assist from Abbey Lee as Josie Cohan. George M! is nostalgia squared, a dance-filled staging of an old-fashioned show, with spirited performances of beloved chestnuts, from "Give My Regards to Broadway" to "I'm a Yankee Doodle Dandy." Rating (out of 5): ★★★½

Under the strong musical direction of Mary Chun, the show features a remarkable company of first-rate opera singers, including baritone Julio Ferrari as the villainous Tonio, the soprano Julia Hathaway (amazing) as the tragic actress Nedda, and tenor Mark Kratz as the iconic clown-turned-murderer Pagliacci. It's one of Cinnabar's most successful and entertaining opera productions in years. ★★★★

Paired with Pagliacci is the brilliant 20-minute, clown-themed one-act Rhapsody of Fools, written and performed by Christina Lewis, James Pelican and Lluis Valls. An inspired bit of physical comedy, it gives us three hapless backstage crew members, attempting to set up for an opera presentation, ultimately forced to improvise an opera of their own—with a bit of help from the rock band Queen. ★★★★

In terms of variety, the freshest of the pack is Steven Dietz's marvelous Becky's New Car, directed by Carl Jordan for Sonoma Arts Live. Hilarious and heartfelt, this inventive tale of a woman's car-themed midlife crisis is crammed with twists, turns, laughs and tears. As Becky, torn between the life she loves and a new possibility she never dreamed possible, Melissa Claire is wonderful. Excellent supporting performances are delivered by Matt Witthaus as Becky's stunningly understanding husband, and Mike Pavone as the wealthy car buyer who throws her a world-class curve.