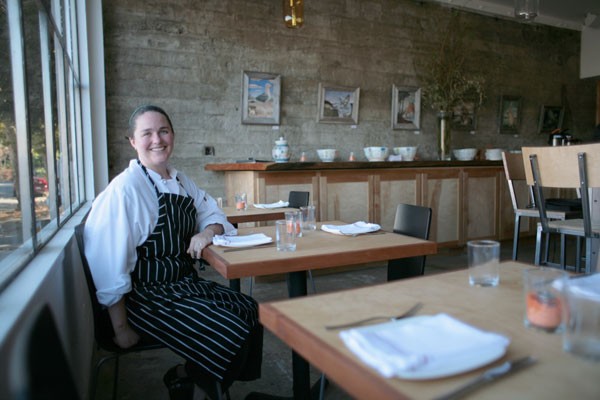 The first time I had dinner at the Spinster Sisters the place was half full, but filled up rapidly. The second time, the restaurant was packed and I had to wait 10 minutes or so for a table. The next time I go, I expect there'll be a line around the block to get in. And I'll happily wait. You get my point: the Spinster Sisters has got it going on.

The five-week-old restaurant is easily the most exciting to open in Santa Rosa this year. Right out of the gate the place was a hit, and it's easy to see why.

Visually, the restaurant is a stunner. Set in a long, brick-colored building in the elbow crook formed by highways 12 and 101 on artsy South A Street, the restaurant brings some big-city good looks to the little neighborhood. A tall grid of paned windows allows light to pour in and play off the gorgeous square bar, the focal point of the restaurant, topped with enormous 14-foot slabs of polished, century-old redwood.

"We wanted a bar where people could look at each other," says partner and general manager Giovanni Cerrone. "A watering hole."

A banquette and a group table are also made from single specimens of redwood. The two-top wooden tables around the bar are custom-made as well, complementing the bar tops. The tables were repurposed from the old doors in a former therapy office the new owners inherited when they took over the building. (Those hard surfaces look great, but they can make for a noisy dining room when the place is full, which is often.)

Big, bare bulb lamps encased in thick glass hang overhead. Two exposed concrete walls add a rough but urbane look. The aesthetic idea was to strip away the years, let the building show its age, and celebrate an area that before the freeway divided the town was once a major crossroads in Sonoma County.

"We were eager to see Santa Rosa in that light," Cerrone says. "It's interesting to see people rediscover this neighborhood, many of whom didn't even know it existed."

Rows of moody animal portraits painted by local artist Hillary Younglove give the place a gallery feel, a natural fit for a neighborhood with several art galleries; look for more artists to grace the walls in the months to come.

All that artistry and style, of course, is just a backdrop for the food. The reasonably priced menu is nearly pitch-perfect, upscale American food with a few global accents. The list of starters and bar bites is the Spinster Sister's strongest suit. Given the 49-seat restaurant's appealing list of local wines and beers on tap, Liza Hinman (former chef at the late Santi) probably figured many guests would just want a few small plates to share as they linger over a glass of wine. If you're looking for a full meal, well, they can do that, too.

By all means start with a bowl of the lime-, chile- and sea-salt-roasted-garbanzo beans ($5). The beans are served green and in the pod, like edamame. It takes a little practice to figure out how to pop them open, but the salty, sour and spicy flavors make them compulsively edible.