MTC sets 'Carol' on the stage of Hades 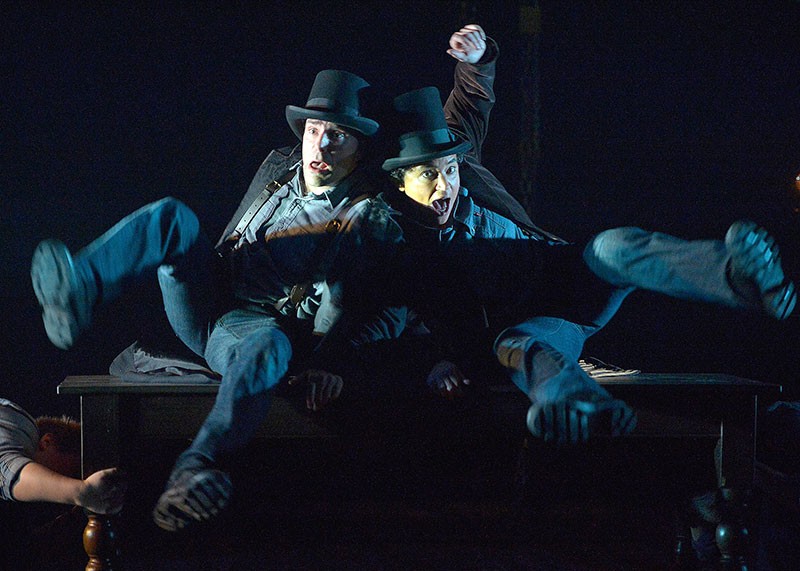 Ominous scaffolding casts shadows across a dimly lit stage. A high, wood-plank bridge spans the spare performance space, steeply raked and surrounded by crates, backstage paraphernalia and festoons of iron chains hanging like clusters of evil fruit. It's the perfect playground for a Christmas play taking place mainly in Hell.

Such is the set of Marin Theatre Company's Jacob Marley's Christmas Carol, directed by Jon Tracy (Strangers, Babies; Terminus). In Tom Mula's dark, alternative adaptation of Charles Dickens' Christmas Carol, the familiar story is retold from the point of view of Jacob Marley, Ebenezer Scrooge's dead business partner. Of course, ghosts, chains and the threat of eternal damnation hang over the original version as well, and both end with a satisfyingly redemptive, catch-in-the-throat climax. But the change of perspective in Mula's story yields many pleasures and surprises.

Director Tracy, working at a blurring, frenetic pace here, does have a knack for the macabre, and he certainly turns on the darkness. By keeping the stage dim and slightly hazy with smoke, he emphasizes the metaphor, while the actors carry flashlights to illuminate each other's faces and create some stunning X-Files-type effects.

Rooted in the glorious oratory of Victorian speech, this is the kind of play in which all actors serves as narrator, stepping in and out of character to deliver poetic descriptions and set the rapidly changing scenes.

Marley (Khris Lewin) is dead, and in the afterlife offices of the Record Keeper (Stacy Ross), he learns that he must serve eternity in Hell, his soul doomed to gradually fuse into the locks and cash-boxes to which he devoted his life. When he learns that his only hope of escape is in finding a way to redeem the miserly soul of his partner Scrooge (Nicholas Pelczar), Marley reluctantly accepts the challenge. With the help of a boyish, underworld assistant named the Bogle (Rami Magron), Marley sets out, now a ghost among the living, to try and change the heart of a man even less redeemable than himself.

Cleverly and inventively staged, with the energetic actors serving double-duty as props and scenery, Tracy keeps things visually interesting, though the poor actors' words fly so fast and furious it's sometimes hard to separate the moments of true emotion from all the rest. Still, there is much to delight the spirit and stir the senses in this offbeat but large-hearted twist on a beloved classic.