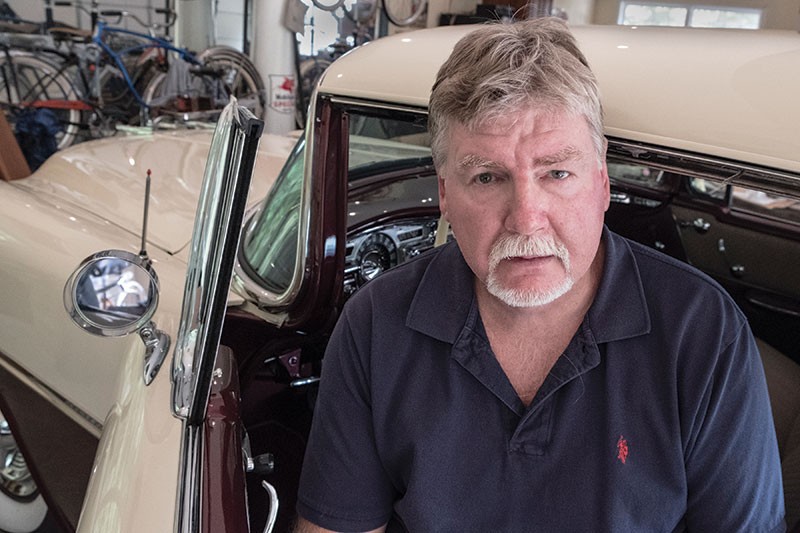 Mark Emmett co-founded the Guerneville Community Alliance to give residents a greater voice.

Mark Emmett has been looking out for Guerneville since he moved there 25 years ago.

After retiring from the Alameda County Fire Department, Emmett worked as a general contractor until two back surgeries made him give up manual labor. But he didn't slow down. He was elected to the Russian River Fire Protection District board of directors in 2014.

One of the first things Emmett noticed upon his new appointment was that 20 to 25 percent of the ambulance calls the fire department received were for the homeless. It takes at least two hours for paramedics to transport someone from Guerneville to a hospital in Santa Rosa and then drive back, during which time there's no ambulance available in town. Since that realization, Emmett has been at the forefront of trying to remedy Guerneville's homeless problem and others.

"The people who live and work here needed a voice," Emmett says. "People need to have an avenue to speak up instead of feeling more neglected."

With that in mind, he co-founded the nonprofit Guerneville Community Alliance to work on solving community problems.

Homelessness is at the top of the list. At one of the group's meetings on homelessness in January, more than 500 people showed up. One of the group's first projects was to identify homeless encampments and clean them up with the help of Guerneville's Clean River Alliance.

"Our goal is to help and provide services for the people who want help, who want to change, and keep people safe by helping control the people who are abusing substances and engaging in other illegal behavior."

Through this initiative, the organization has worked with the sheriff and private property owners.

"We've created relationships with the supervisors, Efren Carrillo and now Lynda Hopkins and with law enforcement; we were even approached by [Sonoma County Sheriff's Office] Captain Mark Essick, who said, 'We really need to connect to your organization,'" Emmett says.

"We're working to provide services to people who want help. And what we've done with Guerneville law enforcement, it's really working for the drugs and illegal stuff. The demographics of the town are changing. It's not just a vacation spot anymore. We're trying to meet that."

Emmett was pleased that the Guerneville Community Alliance was able to broker a meeting with local merchants, the sheriff's office and the homeless.

"It was so law enforcement and the merchants could hear their stories—it was very dramatic."

Beyond homelessness, Emmett wants to work with other river towns to share ambulance services, and he has his eyes on projects to improve air quality.

"I simply love the community," he says.

Lynette McLean hates it when visitors head to Muir Woods instead of the less crowded (and closer) Armstrong Woods reserve.

How would you spend your perfect day in Guerneville?

My perspective as an innkeeper is different than when I was a tourist. Then, it was sitting on a deck and watching the trees. Now, it would have to be having breakfast on the deck, taking my dog on a walk at Armstrong Woods, driving to Bodega Bay and having an outdoor barbecue with friends. Guerneville is a low-key town; there's enough to do to be occupied, but not too much, so you feel like you're missing out. I wish I could just turn off the wi-fi at night [at the inn] to encourage relaxation.

Where is your favorite place to eat in Guerneville?

As an innkeeper, it's like having kids—I can't say a favorite. I always point out the taco truck at Safeway. Usually, people aren't comfortable eating at trucks in strange towns, so I like to reassure them. It's so yummy and the people are so sweet. There's nobody doing lousy food [in Guerneville], so that's great. I try and point out places they might overlook, like Bloomsters [Korean Diner]. People think it's just a historical find, and less about food, so I like bringing things to their attention.

Where do you take first-time visitors to Guerneville?

They've got to go to Armstrong Woods. It pisses me off if they've already gone to Muir Woods—they're so similar, but one's full of tourists and the other is basically empty where you can be by yourself.

What do you know about Guerneville that others don't?

Lots of things since I'm an innkeeper—I can't tell you though. Fifty feet from where I'm sitting is the tallest redwood tree in Guerneville. It's absolutely stunning and gigantic. It got hit by lightning a long time ago, and it's maybe eight feet across. It's so old that the bark has started to twist.

If you could change one thing about Guerneville, what would it be?

I like eating outside. I would love to magically make Main Street wide enough to be able to have a 10-foot sidewalk for eating outside [in front of shops]. I think that Guerneville is perfect, with its funky charm and interesting, passionate people, which is definitely what I'd like to keep.

THINGS TO DO IN GUERNEVILLE

The North Bay's long-standing gay pride weekend, Sonoma County Pride, this year brings the LGBTQ+ community together in a brand-new event, the "Rise Up" solidarity rally. In addition to advocating for gay rights, this rally will rise to the occasion and call for action on women's rights, immigration rights and economic equality. The rally will feature over a dozen keynote speakers, including Sonoma County District Attorney Jill Ravitch and Sonoma County Supervisor Lynda Hopkins, as well as activists who represent a vast range of political and social groups looking to resist the current administration, Congress, and the courts seeking to roll back hard-fought civil rights. Saturday, June 3, Guerneville Lodge, 15905 River Rd, Guerneville. 1pm. sonomacountypride.org.

After you've risen up at Saturday's rally, be sure to get a spot along downtown Guerneville's Unity Parade route on Sunday, as the popular parade showcases the vibrant LGBTQ+ community in the North Bay for a 30th year. This year's parade features Chairman of the Federated Indians of Graton Rancheria Greg Sarris, Hopkins and nationally recognized transgender activist and motivational speaker Aydian Dowling as grand marshals. Once the parade traverses downtown Guerneville, the Unity Festival commences with Dowling presenting a keynote talk, "My Journey to Authenticity," as well as music from folk duo Mouths of Babes, who've recently relocated back to Sonoma County, and an array of exhibitors, food and drinks and celebratory fun for all. Sunday, June 4. Parade starts on Main St, Guerneville at 11am. Festival happens at Guerneville Lodge, 15905 River Rd, Guerneville. Noon to 7pm. sonomacountypride.org.

In the summer, Guerneville's picturesque plaza adjacent to the river park goes from quaint hangout spot to highly-charged concert venue when the Rockin' the River series brings electrified fun to town every other week. The family friendly street party features popular rock bands from throughout the Bay Area and beyond performing for crowds in the setting sun, and this year's series opens with a set by slide guitar master Roy Rogers and His Delta Rhythm Kings. Other acts scheduled for this summer include soul rockers the Highway Poets, the all-female powerhouse Led Zeppelin tribute band Zepparella, Los Angeles-based salsa dance band Invasion Latina and Motown masters the Best Intentions. Bring chairs or dancing shoes and enjoy this series every other Thursday, June 22 through Sept 14, at Guerneville Plaza, Armstrong and River Roads, Guerneville. 7pm. Free admission. rockintheriver.org.

Reflecting the town's laidback and friendly vibe, the 15th annual Russian River Beer Revival will not let a record-breaking rainy season sully the shores of the Russian River where the beer tasting and barbecue cook-off take place. Hosted by West County microbrewers Stumptown Brewery, this year's event promises to revive your inner ale aficionado with beers and ciders from some 30 crafters, and two dozen barbecue teams facing off in a tasty competition. Live music and local color make for a special day under the sun on Saturday, Aug 19, at Stumptown Brewery, 15045 River Rd, Guerneville. Gates open at noon. $75-$100. Shuttle bus from Santa Rosa available. Pre-sale only, no tickets at the door. stumptown.com/revival.