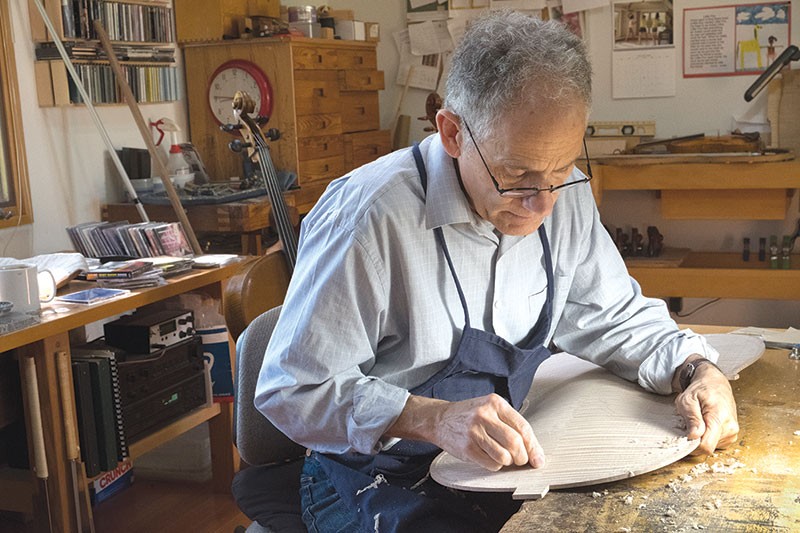 Violin maker Anthony Lane and his twin brother were well on the way "to becoming successful hoodlums," Lane says with a laugh, recalling his South Chicago upbringing as he leans back in his Petaluma workshop and reflects on the life of a master instrument-maker.

Lane comes from a family of musicians, craftsmen and all-around arty types, and was introduced to the work of legendary Chicago-based luthier Carl Becker. As a young man of 22, he says, "it never occurred to me that people were still making instruments." After considering a career in international business, "I decided I would do what I was most afraid of doing."

Thirty eight years later, Lane is part of a select coterie of violin, viola and cello makers whose instruments wind up in top orchestras around the world. The violins and violas sell for $20,000; his cellos are double that. He lives out in unincorporated Petaluma with his wife, Ruth, a cellist with the San Francisco Opera.

Makers like Lane are at something of a disadvantage in a world where players will be a lot more forgiving when it comes to old Stradivarius instruments, the standard-bearer of violins.

When players are assessing an instrument, he says, the counterintuitive fact is that "the value is never based on how the instrument sounds. That is subjective. They are interested in the condition of the instrument and its provenance—how it sounds is at the bottom. It's an artifact that carries with it, and will continue to carry that whole social compact with it through time."

He recounts stories of master violinists who didn't like a Strad at first and had to learn how to play it, for three or four months sometimes, "until they are inseparable, they can't live without it."

Not so with his instruments. "Players don't let a modern instrument grow on them," Lane says, adding that "for every person who says yes, 12 to 20 say no thanks, 'I love it, but it's not right for me.' And I'm OK with that." In 300 years, Lane says, he hopes people hold his instruments in the same high regard as Stradivarius.

Lane's workshop is full of blanks and works-in-progress. He has a set of hand-hewn bridges on a windowsill that looks over a hilly Petaluma landscape. He's one of a select coterie of master violin makers around the globe who work at the highest level of craftsmanship, where variances are measured in millimeters and sculpting the sound is an intricate dance of carving, bending and shaping the wood, mostly maple and spruce.

There's a natural process that the instrument undergoes called "humidity cycling" which describes the way the wood expands and contracts, and how that process lends toward the sound of the instrument itself—a kind of "settling in" of the wood.

And it all starts with the wood, says Lane as he describes the three main keys to building a successful instrument. When it comes to the wood, you want an instrument that will resonate with the least amount of force—here's where the actual physical properties of the wood, its density and its grain, are critical.

Then comes the arching of the instrument, which Lane describes as the "sculpting sound" part of the job. The arching is accomplished through carving the wood, which is then planed to between 2.3 and 3 millimeters. "Different parts of the instrument vibrate at different pitches," Lane explains. "The amount of variability you can build into the instrument through the arch—it's incredible."

As he describes the labor-intensive process, Lane breaks out a box filled with finger planes, including one he made himself from an old billiard ball and an antler. The tiny, hand-made plane is a work of art in itself.

(By the way, Lane's twin brother turned out OK, too—he's a pro flutist.)