Onye Onyemaechi takes his message beyond the North Bay 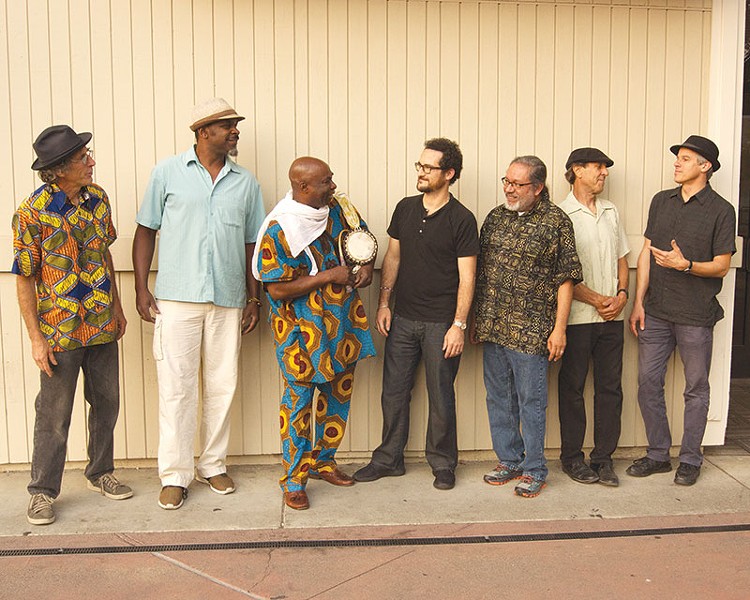 When master percussionist Onye Onyemaechi isn't leading mystical journeys in the deserts of Morocco or presenting weeklong sessions on the spirituality of drumming in Germany, he leads the dynamic Afrobeat band Onye & the Messengers in the North Bay, where he's lived for the last 25 years.

Known for a dance-inducing repertoire of African rhythms blended with jazz, funk and splashes of reggae, Onye & the Messengers get the crowd moving at the Redwood Cafe in Cotati on July 15.

Born in Nigeria, Onyemaechi studied business in Boston, but ultimately chose a musical life over a corporate one in the early 1980s. "Now my business is to make people happy," he says."

Onyemaechi moved to the North Bay in 1989 and founded Village Rhythms as a way to present drumming and music in a multitude of educational programs for individuals, businesses, schools and other organizations around the world.

Seeing music as a tool for community building and self-empowerment, Onyemaechi often performs at school assemblies and promotes a joy of learning in his youth programs. One of Onyemaechi's most popular offerings is African Village Celebrations, a public program he brings to libraries and museums throughout Northern California. These 60-minute workshops feature African drumming, dancing, songs and stories presented in their historical and cultural context. Participants learn to value and integrate their own heritage into the experience.

In addition to his work with Village Rhythms, Onyemaechi is also a celebrated performing and recording artist, spreading positive values through the rich tradition of Afrobeat from his native Nigeria.

"I am inclusive of diversity in all aspects," Onyemaechi says. "Music is a very powerful medium to bring that message to people all over the world. Music is full of love and kindness; it allows us to be free and de-stress from all our problems."

Made up of several seasoned Bay Area musicians, Onye & the Messengers excel at showcasing not only the technicality of Afrobeat's polyrhythmic sound, but also the genre's intuitive and creative flair, and the group expands on that creativity with jazz and world music embellishments.

"What I do with the band is to allow them to be free, to be available within their own creative means," Onyemaechi says, "to let the music speak for itself."