New anthology from the Write On Mamas, with an excerpt. Plus: Local lit roundup, complete literary listings

For more information about 'Mamas Write' go to www.writeonmamas.com.

Teri Stevens lives in Napa with her husband, son and twin daughters. She is a founding member of the Write On Mamas and serves as the group's marketing director. This essay was reprinted with permission from the upcoming 'Mamas Write.' 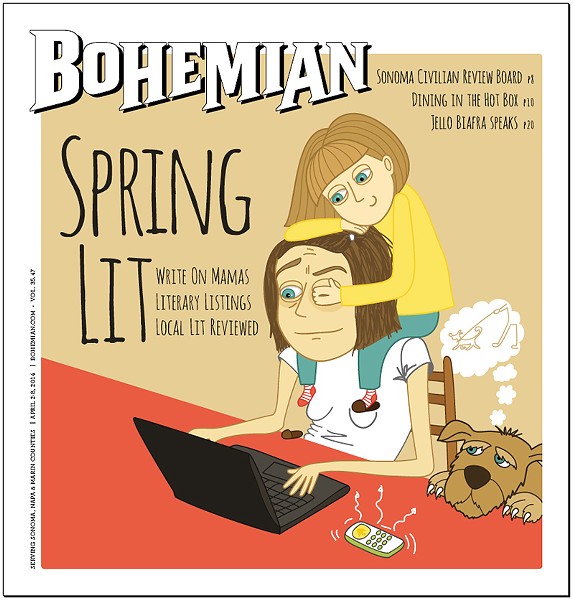 NEW ANTHOLOGY FROM THE WRITE ON MAMAS

The first ninety minutes of the Write On Mamas' monthly meeting are virtually silent. No writing prompts. No casual talk about the latest, greatest novels. The only sounds in the room are fingers clacking across computer keyboards and pens scratching away on notepads.

"It's a precious 90 minutes," says Write On Mamas founding member Janine Kovac, by phone from her home in Oakland. A mother of three, including four-year-old twins born months premature, Kovac understands the need caregivers and providers have to get away from the daily grind and write.

"The goal is to provide fertile soil for parents who are also writers," says Kovac. "That comes in the form of the meeting that starts with time to write, speakers, our online community that exchanges writing opportunities, submission opportunities, writing residencies. We also break into small groups to give each feedback on a piece or a grant or proposal."

The group also works to enhance visibility for its 55 members. The Write On Mamas host an evening of readings at LitQuake, the hip and popular literary festival that takes over San Francisco each October. And this month the group releases its first book through its publishing arm, Bittersweet Press.

Mamas Write, an anthology of essays centered on the theme "Why I Write," was edited by Kovac, Joanne Hartman and Mary Hill, and takes the reader on a moving journey through what it's like to be a parent who writes and a writer who parents. Launch parties are scheduled for April 27 at Napa Bookmine in Napa and May 4 at Book Passage in Corte Madera.

The collection offers a mix of humor and pathos. Lorrie Goldin's "From Conception to Empty Nest" finds a funny and clever comparison between the development of a writing life and the development of a child, and in "Not Afraid of Words," Steven Friedman (Write On Mamas is an inclusive group) writes about his need to document the story of his wife Verna's diagnosis of breast cancer. She died in 2010.

The anthology also has a fair share of pathos, including "There Was a Before," a devastating piece by Teri Stevens about the pre-term birth of her son at 24 weeks. A former marketing director at the Napa Valley Opera house, Stevens lives in Napa and is now a mother of three. (The piece, excerpted in full, follows.)

The anthology has been in the works for more than two years. The process was more challenging than first anticipated, since it was decided early on to include quality prose from everyone "who turned their submissions in on time," says Kovac.

Most contributors signed up for a 10-week online workshop with Kate Hopper, a Minneapolis-based teacher and author who encourages honest writing about what it's like to be a mom—while combating myths about motherhood that refuse to die. Hopper helped the writers shape their essays, since, as Kovac says, the group tended to be "too nice" to each other. Self-published books can sometimes come across as amateurish, but Mamas Write is polished and profound, and many of the pieces would be comfortable in the pages of established literary journals.

"A lot of writing about motherhood is still considered 'mommy memoir' or 'mommy blogging' and isn't seen as serious memoir," says Kovac. "Even the word 'mother' is so loaded. There are some in publishing that are just like, 'We don't want motherhood stories.'"

Kovac adds that whatever literary space there is for moms tends to be taken up by well-known writers like Anne Lamott and Ayelet Waldeman. The stigma has led to an ongoing conversation among the Write On Mamas about whether or not "Mamas" should stay in the name.

The answer is always a resounding yes, says Kovac.