'Badass Acting' can be found at BadassActing.com 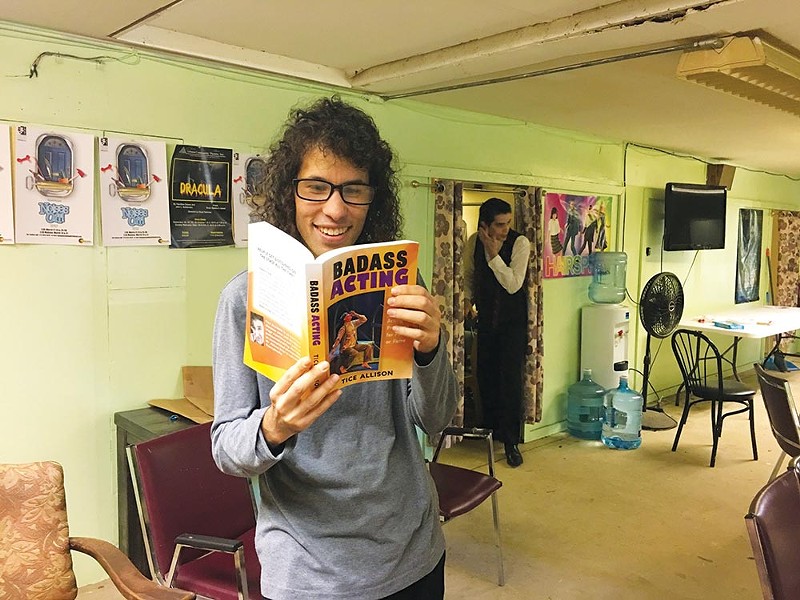 The front cover of the new book Badass Acting, by Tice Allison, features a photo of the author in the act of devouring an insect. Allison actually makes the critter look, well, kind of delicious.

The picture is a publicity shot from Raven Players' 2015 production of Dracula, where Allison—a Sonoma County native and recently relocated resident of Vantage Borough in Lancaster County, Pennsylvania—played the Count's bug-eating servant Renfield. Allison has a long Sonoma County career of playing characters like Renfield.

"I play creeps," he says, via phone from his new home, currently dusted with snow. "I've made a career out of playing a whole lot of creeps. I like creeps. There's a lot of meat there for an actor."

And now, with the book he's self-published and is selling through his website, Allison is hoping to help other actors get in touch with their own inner creep—or hero, ingénue, romantic lead or supporting character, as it were.

Though Allison sold his Sebastopol home in the spring and then moved across the country, he says that in many ways, Badass Acting has its roots in Sonoma County and environs. Many of the anecdotal experiences he vividly describes in the book occurred at the Raven Theater, Sixth Street Playhouse, Lucky Penny Community Arts Center and other Bay Area institutions.

A professional freelance graphic artist by "daytime" trade, Allison has been working on the book, in some capacity, for about three years.

"I've written and rewritten and rewritten it—I've chronicled every single play I've ever been in, and tried to determine what I may have learned from it, and what lessons I may have come across over those productions," he says. "Turns out, I've learned a lot. I really wanted my book to be something that people could use to enhance their own acting experiences. So far, the response has been pretty gratifying."

Admitting readily that some might wonder why an unknown actor would think anyone would be interested in his views on acting, Allison says he wrote the book for people like himself— community theater actors who dream of maybe being discovered and venturing into film or television; people he calls Joe Blow Nobodies.

Asked if he misses Sonoma County, Allison says that while he misses some of the theaters he worked with and some of the people he shared some stages with, the relocation has proven to be extremely positive.

"Moving here was easily the best thing I've ever done for myself," he says. And yes, he's still acting, having recently appeared in a production of Agatha Christie's And Then There Were None, in which he played the villain.

"True to what I am best known for," he says.

That production was at Lebanon Community Theater, in Lebanon (pronounced "Lebnun," he points out).

"It's a beautiful little theater," Allison says. "It reminds me of Cinnabar Theater or the Raven Theater. I look forward to doing more theater here, and who knows, maybe being the author of Badass Acting will help open some doors."