'The Newsroom' airs Sundays at 10pm on HBO. 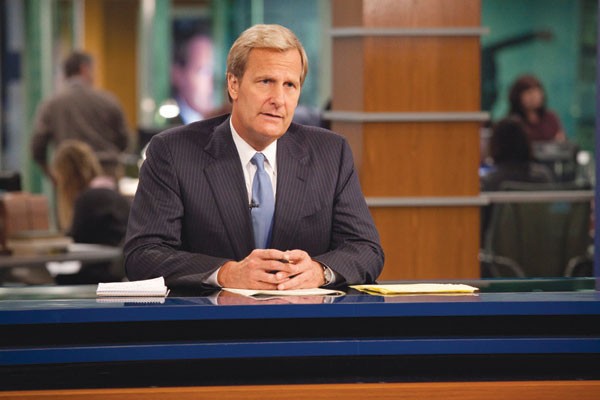 For fans of Aaron Sorkin's punchy, ham-fisted moralizing, Sunday, June 24, was a return to church. The writer debuted his new HBO drama, The Newsroom, steeling up the network's already formidable rotation with a show about an idealistic newsman who wants to make an honest wife out of cable news.

In the space of one clumsy pilot episode, however, this was a dull axe to grind, bookending a potentially clever parody with indulgent dialogue and wistful histrionics for an America that never was.

Where the show lands, it does so because Sorkin abuses a famous political maxim: Speak not at all softly, carry the biggest stick and then club everyone to death with it as you make grandstanding value judgments.

Jeff Daniels carries the stick as Will McAvoy, a surly anchor undergoing a transformation from milquetoast everyman to impassioned soothsayer. Following a slightly unhinged tirade made during an unusually engaging media panel, McAvoy and his team of crusaders at the Atlantic Cable News network try to flip the script of TV news overnight.

And it's just that easy. Network president and resident lush Charlie Skinner (Sam Waterston) tells him as much: "About 10 minutes ago? We did the news well. You know how? We just decided to."

We hope to learn something about the two anonymous black characters, one of whom is "smart enough" to challenge Obama. Then there's the problem of Slumdog Millionaire's Dev Patel. The network's lone blogger, he responds to "Neal Sampat" and occasionally to "Punjab," which is a place in India and not, contrary to popular opinion, a name. To be fair, Patel is Punjabi! But still. The point is clear: McAvoy is one callous buzzard, concerned with "just the facts," except when he isn't.

That's a burden also carried by the viewer. The show is so tantalizingly manipulative and dishonest that despite betraying the philosophical axis of its own premise, you stop caring. It's easy to be dismantled by the blitzkrieg of Sorkin's dialogue, where characters don't just deal in measly small talk but also unpack monologues full of heightened imperatives and bite.

No sound is without a scheme: the very leading lilt of Thomas Newman's piano, a thoughtful string or two, so much profundity and reflection and purpose to behold. Hardly a new ploy, that. If you're holding a candle for high truth, let go and bask in the flames.

The pilot's plot unravels with fury. While MacHale plays to McAvoy's heroic, pained ego with Don Quixote references, Harper and Sampat alight on breaking news: an oil spill off the coast of Louisiana—the infamous Deepwater Horizon explosion of 2010.

The disaster presents a opportunity for McAvoy's "finest hour," and where crickets once chirped, the studio's now full of movement and mayday appeals. They tie things up with a pristine bow, which means that thanks to not one but two family sources, Harper secures the story, positioning McAvoy as less like Jay Leno, more like Walter Cronkite.

He's back, baby! And he finally remembers his assistant's name, an unhinged blonde by the name of Margaret (Alison Pill, whose role as Zelda Fitzgerald in Woody Allen's Midnight in Paris proves she's capable of total wish fulfillment). The hero rides off on his horse/donkey.

For all of this, Sorkin's been skewered by (surprise) the media in a way that he wasn't for a show like The West Wing or the doomsday prophecy that was 2010's Social Network.

The Newsroom is as overwrought and mythological, but instead of aiming his slingshot of morality at cold-blooded politicos or internet entrepreneurs, Sorkin is taking a weird slant on the news media, and they've already got enough people to do that (though they won't). This isn't the skeptical take of Paddy Chayefsky's Network either, a film Sorkin is aware of but clearly not interested in remaking.

The question isn't "What is this show about?" though there's that. It's "Who is this show about?"—and if you temporarily ignore the obviousness of seeing Sorkin's name hang a shade brighter than the show's title, you can see the other chance for humor.

In speaking with the New York Times, Keith Olbermann, the former sportsman turned progressive crank, humbly submitted himself as person of interest. It seems plausible given "Newsroom" and its similarity to an earlier Sorkin show, "Sports Night."

Still, I suspect that Will McAvoy is reminiscent of a lot of people, and maybe a handful of them have something to do with the news. He's a cynic, but also a sentimentalist. He is an idea. He exists for more than our, or Aaron Sorkin's, ego. He exists to entertain.