'The 39 Steps' plays out in dual runs 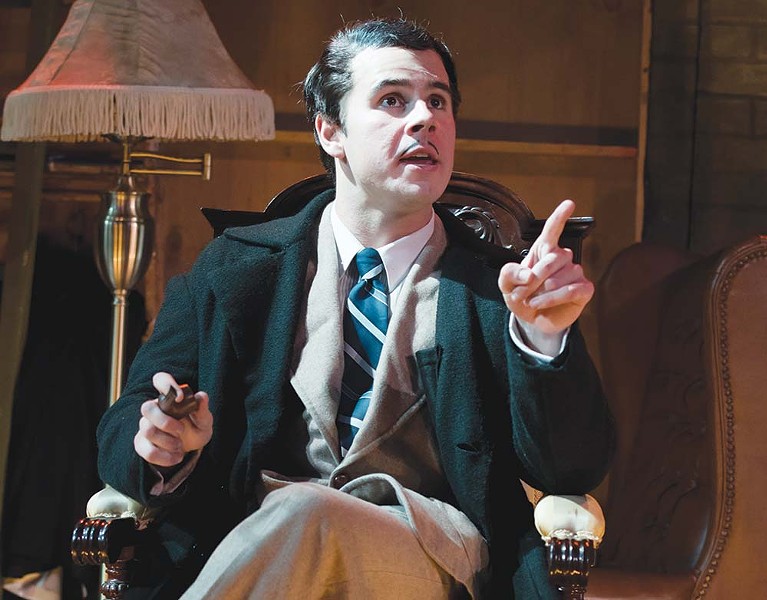 In comedy, timing is everything, and two North Bay theater companies have timed productions of the same comedy to run concurrently. The Cloverdale Performing Arts Center and SRJC's Summer Repertory Theatre program are presenting Patrick Barlow's adaptation of The 39 Steps.

Based on the 1915 adventure novel by John Buchan and the 1935 Alfred Hitchcock film, it's your basic "innocent man gets caught up with an international spy ring and ends up falsely accused of murder" story given the farcical treatment. It ran for a few years on and Off-Broadway and is a popular choice for regional and community theaters.

It's a challenging show with 33 scenes, but it requires only four actors. One plays the lead while the other three take on every other role. One actor can play a newsboy, a lingerie salesman and a cop—often in the same scene.

Richard Hannay (Chris Johnston at CPAC, Nicolas Fernandez at SRT) is enjoying an evening at the theater when a shot rings out. A femme fatale asks him for his help, as she's on the run from a mysterious organization intent on stealing vital information about the country's defenses. She ends up dead, and Hannay finds himself on the run. Can he avoid the police, the murderers, a villainous professor and a randy Scottish innkeeper's wife?

Quick changes, horrible accents and the occasional swapping of hats allow the troupes of three (Sandy Ziviani, Dan Stryker and Austin Schmidt at CPAC; Caroline Pernick, Roberto Perez Kempton and Carson Cerney at SRT) to essay a couple of dozen roles, and all earn their share of laughs.

Scenic design is the main difference between the two productions.Theron Wineinger brings a nicely detailed set, which holds almost every item necessary for each scene, to SRT's version. The actors double as the crew as they grab things off of shelves or utilize chairs or boxes on stage to represent a car or a train. CPAC's Yavé Guzmán moves in the opposite direction, with large set pieces that require additional crew—and time—to move. This tends to bring the action to a screeching halt.

Some bits ran long, and at two-plus hours both shows tend to lose steam (the film runs a scant 82 minutes), but if you're looking for some laughs, either show will do.