Stick to Your Ribs

Buster's, a taste of true California 'Cue in Calistoga 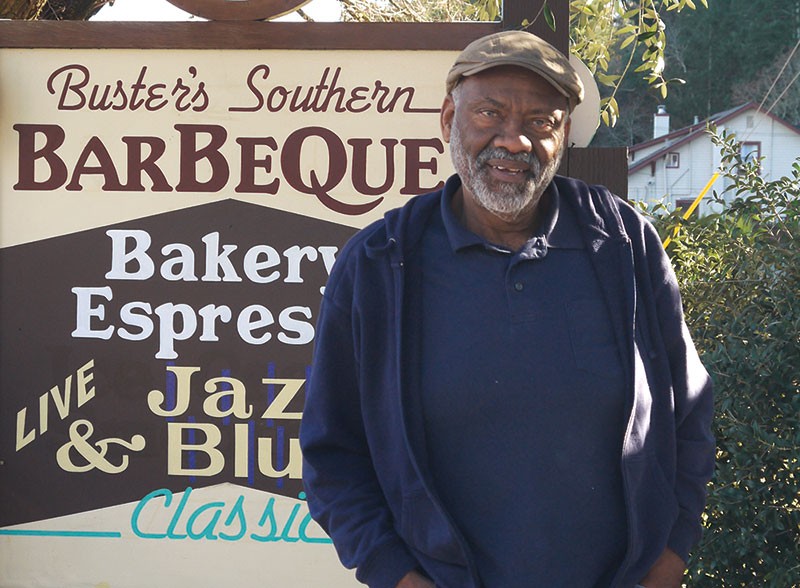 The smoke billowing up through the trees is the first hint. Then the whiff of grilling meat confirms it: Buster's Southern Barbeque & Bakery is just up ahead. Sitting at the very top of Napa Valley, Busters' brings together bikers, wine snobs and families at the crossroads of Calistoga. Regularly voted by Bohemian readers as the best barbecue in Napa, one bite of the succulent tri-tip is all it takes to understand why.

Buster Davis cut his chops in the barbecue field in Southern California, perfecting family recipes for dry rub, sauce and cooking techniques. Twelve years ago, he headed north, taking over the rundown Jolly Kone ice cream store and spiffing up the property. The prep kitchen moved into the tiny ice cream dispensary, with the front windows remaining for ordering and pick up. An adjacent seating area is now closed-in, with heating and A/C added in the last couple years to provide year-round comfort. Along the perimeter of the horseshoe driveway are tables tucked in among the trees.

The heart of Buster's is the barbecue pit, which was made by Davis' brother. In a deep metal box with a grill rack that can be raised or lowered, an oak fire licks the meat, kissing it with mouth-watering wood-smoke flavor. It's a style of cooking commonly associated with Santa Maria on the central coast of California, where cooking over coastal red oak has a rich history.

From the days of the ranchos some 150 years ago, when the vast central-coast inlands were covered with large cattle ranches and the land was still owned by Mexico, beef was cooked over open fires. The cuts were strung onto branches and roasted over pits of roaring oak, giving the meat a signature wood-grilled flavor.

Today, that time-honored style of barbecue is still going strong around the Santa Maria valley where tri-tip is king—and also up in Calistoga at Buster's, where the tri-tip is the most popular item on the menu. Buster's cooks between 35 and 50 of the football-sized hunks on busy weekends, slicing it thickly and serving it with their signature sauce.

The sauce sets Buster's apart from other barbecue. It comes in medium and hot versions, and is served on the side so diners can dip and slather to their liking. Tangy, smoky and with a hint of spice, the medium is the most popular, while the hot sauce is not for the faint of heart—it's got an incendiary kick that will have diners reaching for a frosty glass of Buster's homemade lemonade. In fact, a big sign near the register states that there are no refunds or exchanges if the sauce is too fiery for customers; Buster's wife, Barbara Jolly, says people have tried to return it after one bite.

Racks of beef and pork ribs are another popular menu item. (Gnawing on bones is a modern-day caveperson's dream.) The beef ribs come chewy, with good flavor, and the pork ribs are juicy and luscious, falling off the bone with that signature wood-smoke flavor.

Rounding out the offerings are chicken, hot links and pork loin. Davis recently added pulled pork, simply because so many people kept asking for it. The pile of scrumptious shreds goes well with the slabs of garlic toast that come with every meal, and that hot sauce is the perfect accompaniment to put the tiger back in the tank.

Impeccable barbecue calls for tasty side dishes, and Buster's doesn't disappoint. The beans, in both baked and chili varieties, are velvety, with each bite setting up a craving for the next. Macaroni salad is a starchy foil for the juicy, spicy meats, as is the potato salad, bound with the right amount of good mayonnaise to make a creamy, satisfying mouthful. The coleslaw and three-bean salad are the only green vegetables on offer, piquant and tangy. The cornbread is moist and slightly sweet, an extra that must be ordered separately but well worth it.

Meats can be ordered as dinners, which include two sides and garlic toast; sandwiches served on the garlic toast that come with one side; or as combination plates with up to three grilled items sharing the plate with two sides. Another option is to get the meats to go, in whole or half portions for the tri-tip, racks of ribs, chicken or pork loin, and by the pint for the pulled pork or the piece for the hot links. Jars of barbecue sauce are for sale, and this writer highly recommends having some on hand for whatever's cooking on your home grill. A dollop of Buster's sauce makes everything taste just right.

Davis and Jolly are hoping to tear down the old Jolly Kone structure and erect a larger kitchen building to accommodate the growing business. Their restaurant is for people from all walks of life who appreciate good, rib-sticking comfort food. As one customer stated after wolfing down some of the finest barbecue in northern California: "It's not a meal, it's an experience."