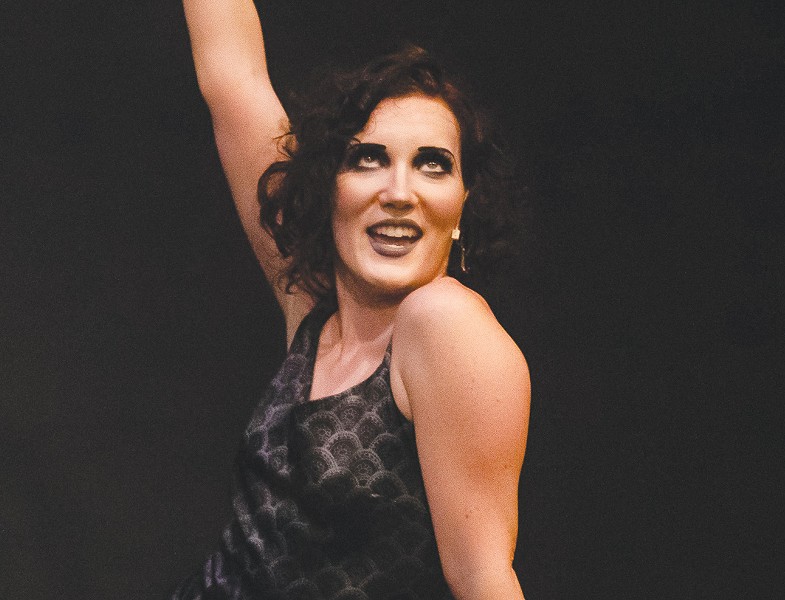 Is there a darker or more depressing Broadway musical than Cabaret?

Kander and Ebb's 1966 musical (with book by Joe Masteroff) won eight Tonys for its original run and four more for its 1998 revival. It's become a staple of regional and community theatres, as evidenced by the umpteen productions throughout the Bay Area in recent memory. It's the season-ending production at Napa's Lucky Penny Productions and it runs through June 16.

Sally's headlining days at Berlin's Kit Kat Klub are over, as are the days of the Weimar Republic. The rise of National Socialism is reflected in the performances at the club, which are overseen by an omnipresent emcee (Brian Watson), and in the dissolution of the two couple's relationships.

Director Ken Sonkin and his team have opted for a monochromatic approach to this production, bathing almost everything from the set and costumes to prop apples and oranges in shades of black, white and gray. This led to a sense of flatness, leaving little for other technical elements (especially lighting) to explore. The "dulling" of the space does not serve the production well, which was further clouded by an ever-present quantity of stage fog.

Sound is also an issue with this production, with background effects often overwhelming key dialogue and inconsistent microphone levels a real problem.

Performance-wise, Garlick does well with an extremely unlikeable female lead. Shallow, self-centered and selfish, Sally Bowles is not a character for whom you'll find yourself rooting. Hook, a talented performer, is about a decade too young for his part and simply doesn't have the weight yet for the role. Pinomaki and Setzer bring heart and a real sense of sadness, regret and resignation to their characters. There's good work by F. James Raasch as a Nazi party official who's the catalyst for most of the action and Watson is excellent as the emcee.

And yet, while several other aspects of the production are also done well (music, choreography), the show never really gelled and this Cabaret simply failed to connect with me. It should have.