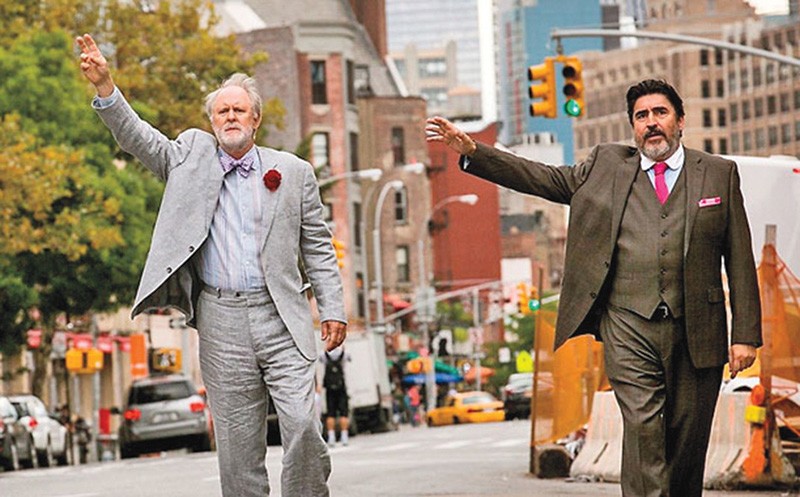 The film Love Is Strange is undone by Manhattan chauvinism—the idea that leaving the island is a fate worse than death.

But we do get the second best thing in Love Is Strange, seeing John Lithgow, like Lear, shirtless, landless and surrounded by ungrateful relatives. Two great films, Leo McCarey's Make Way for Tomorrow (1937) and Yasujiro Ozu's Tokyo Story (1952) have done justice to this story of an old couple separated by homelessness—proof once again that the great movie is the enemy of the pretty good one.

Benjamin (Lithgow) and his partner of some 40 years, George (Alfred Molina), have married at long last. George loses his job teaching at a Catholic high school when the news gets out. The couple have to sell their co-op apartment and couch-surf while they look for a new home. George ends up with neighbors, a pair of hard-partying gay cops. Benjamin descends into the flat of his nephew Elliot (the unduly sinister Darren E. Burrows), his wife, (Marisa Tomei), and their troubled teenage son (Charlie Tahan).

No city-dweller over 50 is immune to the chill of these circumstances. Lithgow and Molina easily have the chops to play lovers in winter, cuddling like bears in a tiny bunk bed. But we're expected to believe that the two lived through four titanic decades of gay history—civil disobedience, legal and social discrimination, a terrible epidemic and then Sept. 11 on top of it all. How did these old gents end up as such babes in the woods?

We're expected to weep at their gentleness and good breeding, and to feel there's no other place they could possibly exist than New York. But director Ira Sachs' very average cityscaping isn't irresistible, either in the standard rooftop view with that same lone fluttering pigeon soaring past the wooden water tanks that's in every Manhattan movie, or in the end scenes, when the city is enveloped in a sunlike glare of its own golden awesomeness.