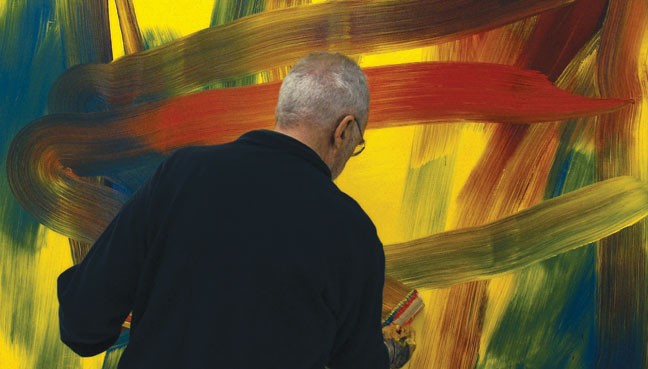 For creative types, it's strangely soothing to watch other people work. That's why the Rafael Film Center's short run of both Gerhard Richter Painter and Ai Weiwei: Never Sorry, showing a brace of artists separated by thousands of miles, is so welcome.

The two films add to the wealth of art documentaries in sculpture (Rivers and Tides), dance (Pina), street art (Exit Through the Gift Shop) and photography (The Woodmans).

H. G. Clouzot's Mystery of Picasso (1956) was perhaps the first demonstration of an artist's process caught on film. Picasso seemed tranquil about being watched, but Richter dreads it: "It's worse than being in the hospital," he's said. "Painting is a secretive business anyway. You do it in secret and then reveal it in public."

Richter, arguably the most eminent living painter, painstakingly scrapes his canvases with oversized squeegees, and one learns more about Richter's art from watching him paint than by having it explained. The work ranges from soft Vermeer-like portraits to slate, tar and charred abstract canvases. In 2009, we watch him wrestling with a series of predominantly yellow and red canvases, as artificially bright as mustard and ketchup. He brings in edged tools to grade them into dense and dynamic pictures, dragging a butcher knife to scrape the surfaces and reveal new layers.

Richter shares with conceptual artist and sculptor Ai a background in the stultifying art tradition of the Communist bloc. Richter never saw his mother and father again after he escaped East Germany in 1961, and Ai's father attempted suicide numerous times after re-education.

If Richter is the image of the abstracted yet exacting German, Ai Weiwei is a fleshy man of the people, the bull in China's shop.

At times, Ai's work is investigative journalism as much as art. Likely because of the Olympics, in 2008 the People's Republic attempted to hide the number of casualties of the Sichuan earthquake. The artist and his apprentices hunted down the names of the 5,000-plus dead and broadcasted them. Later, Ai covered the outside of Munich's Haus der Kunst with a memorial mosaic of some 5,000 nylon school backpacks. When Ai was slugged by a policeman during a 3am raid, he was left with a brain injury that required surgery.

It's easy to understand Ai flipping Tiananmen Square the middle finger, or to get what he means when he tells the camera "Fuck you, Motherland." Some of Ai's art is more slippery, and literally so, as in the case of the millions of ceramic sunflower seeds with which he carpeted the Tate Modern in London.

A deeper analysis of the roots of Ai's art is tantalizingly absent in Alison Klayman's documentary, which nevertheless serves as an account of one brave, persistent man. Ai's work isn't done. He's still fighting government harassment and using Twitter (@Aiww) to get information past "the Great Firewall of China."