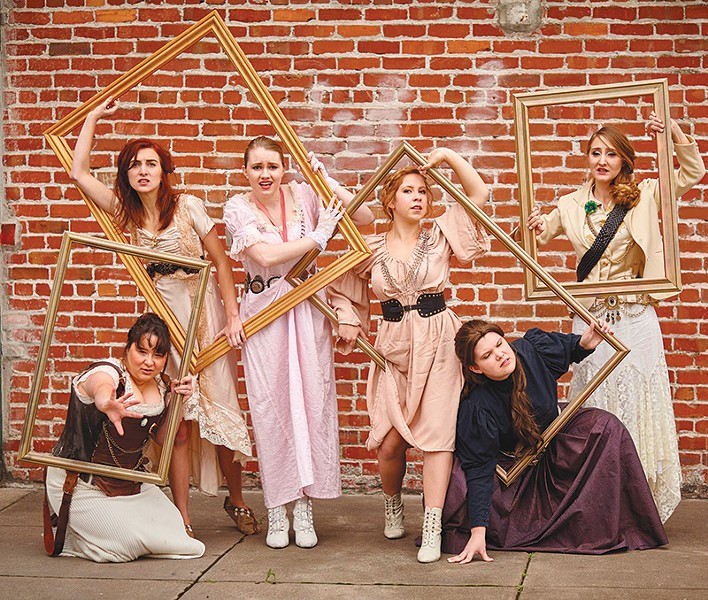 In an imaginary steam-punk version of Victorian England, a band of brave, opera-singing women yearn to be happy, free—and a little naughty.

In East Berlin, Germany, a mysterious woman with a powerful secret survives against impossible odds, ultimately becoming an inspiration to a young American journalist. In two new productions, "gender" is just the tip of the iceberg in stories that challenge us to look beneath the surface of a few amazing human beings, real and fictional.

Heroines, opening Thursday at Sonoma State University, is a fresh musical review featuring classic operetta tunes from Bertolt Brecht, Franz Lehár, Gilbert and Sullivan, and others. Created by musical director Lynn Morrow and stage director Jane Erwin Hammett, Heroines is set during a time of radical change, when women were demanding the vote and more.

Due to a twist of time, women from various centuries join forces to express their feelings through indelible songs borrowed from Threepenny Opera, The Merry Widow and other musical masterpieces. In a magical city blending visuals out of Dickens and Jules Verne, these iconic characters join their hearts and voices, in a revolutionary effort to break the shackles of tradition and inequality.

Sounds like fun. And with voices recruited from SSU's music department and its department of theater arts and dance, this is a show that will probably sound like a blast of pure operatic dynamite—and then some.

At Cinnabar Theater, Doug Wright's Pulitzer-winning one-actor drama I Am My Own Wife introduces audiences to a different kind of heroine: the real-life Charlotte von Mahlsdorf, a transgender woman whose courage—and possibly a bit of treasonous duplicity—allowed her to escape Hitler's concentration camps and survive, in her own way, operating a small museum under the noses of her enemies, all during the communist party's decades-long reign of suspicion and terror in East Berlin.

Working with director Jennifer King, actor Steven Abbott—last seen at Cinnabar in A Couple of Blaguards—plays von Mahlsdorf and 39 other characters in a rip-roaring, tour-de-force of a performance. The two have mounted this production twice before, and recently traveled together to Berlin to rehearse inside the late von Mahlsdorf's onetime home and museum. Part mystery, part memoir, it's a morally tangled true story that promises to open up a few of von Mahlsdorf's secrets, and more than a few eyes.

Theater Heroines I Am My Own Wife Cinnabar Theater